In this second instalment of a trawl through some of the magic moments in Mayo GAA history, we revisit 1985 where one of the all-time great goals of the All-Ireland Championship was scored by a Knockmore man, we remember a brilliant breakthrough for ladies football in 1999, how hard the men of 1950 and ’51 worked to win their back to back All-Ireland titles, reflect upon what is possibly the most watched goal in the history of Gaelic football and, of course, take a look back at 2006 and the day took over ‘The Hill’. 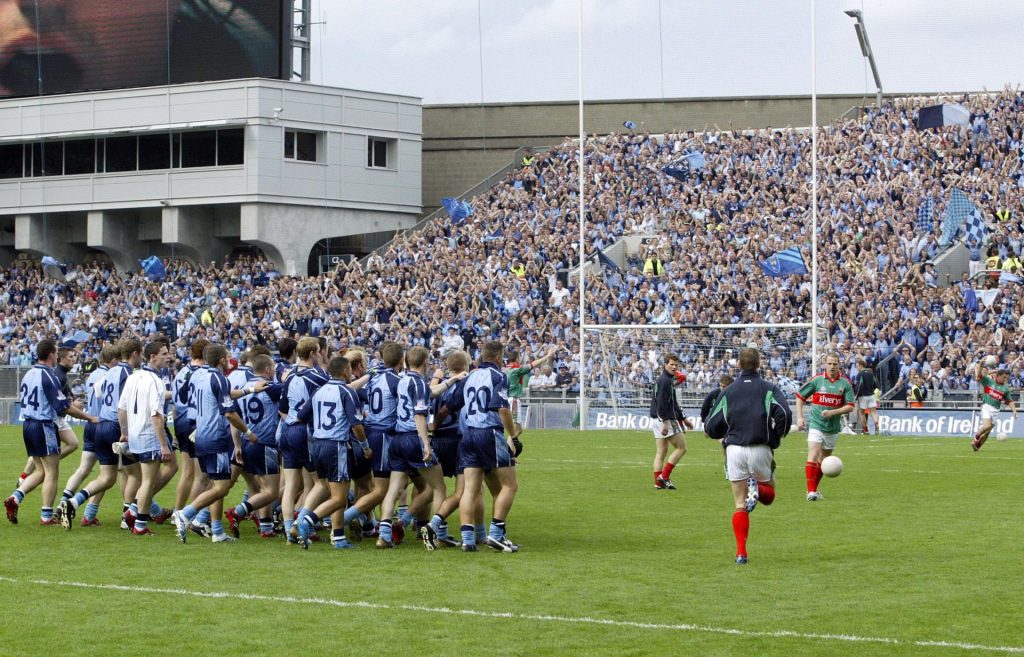 Dublin players huddle towards Hill 16 where Mayo have started their warm up before the 2016 All-Ireland SFC semi-final. Picture: INPHO/Cathal Noonan

“That’s a foolish thing to do,” said Colm O’Rourke on RTÉ in 2006 as the Mayo footballers channelled their Kamikaze urge and dared to tread virgin soil.

The Richter scale is even said to have picked up the gulp of a nation that watched the men in green and red wheel left from their team photograph in front of the Cusack Stand and jog down towards The Hill.

The Dubs claim rights to that end of Croke Park like Britain does Rockall when it’s supposed to be Terra Nullius, or ‘nobody’s land’. Yet in true ‘nobody puts Baby in a corner’ style, Dublin reacted. And sure enough the dancing was about get dirty.

“It will either be a psychological masterstroke by Mickey Moran and John Morrison or it will backfire spectacularly,” remarked Joe Brolly moments before Dublin boss ‘Pillar’ Caffrey slammed into the back of Morrison and the Mayo dietician was flattened by a football. Dublin’s Alan Brogan would later admit he was aiming for another member of the Mayo contingent. How very gracious.

It turned out neither Moran or Morrison had known anything about what plan the Mayo players had hatched – but it wasn’t until Dublin emerged from the tunnel and broke from their photograph towards The Hill that the real fun began.

Ciaran Whelan linked his teammates into one long chain, they barely able to hold back their Gladiator who strutted forward as though he was going to take out the 30 Mayo players one by one.

“They look like the Roman Army on the march at the moment,” quips Sunday Game host Michael Lyster.

Mayo’s players, meanwhile, appear so disinterested that one of them, too far off to make out but clearly left footed (so draw up the shortlist), nonchalantly solos his way through the entire Dublin squad which has now plonked itself in front of The Hill in want of the adulation of their by now frenzied supporters.

“Will Mayo now retreat because that would now be the thing to do, for me,” asks Lyster who, in fairness, it turns out was only suggesting exactly what Mayo manager Mickey Moran was pleading of his players down on the pitch.

Cora and the collarbone 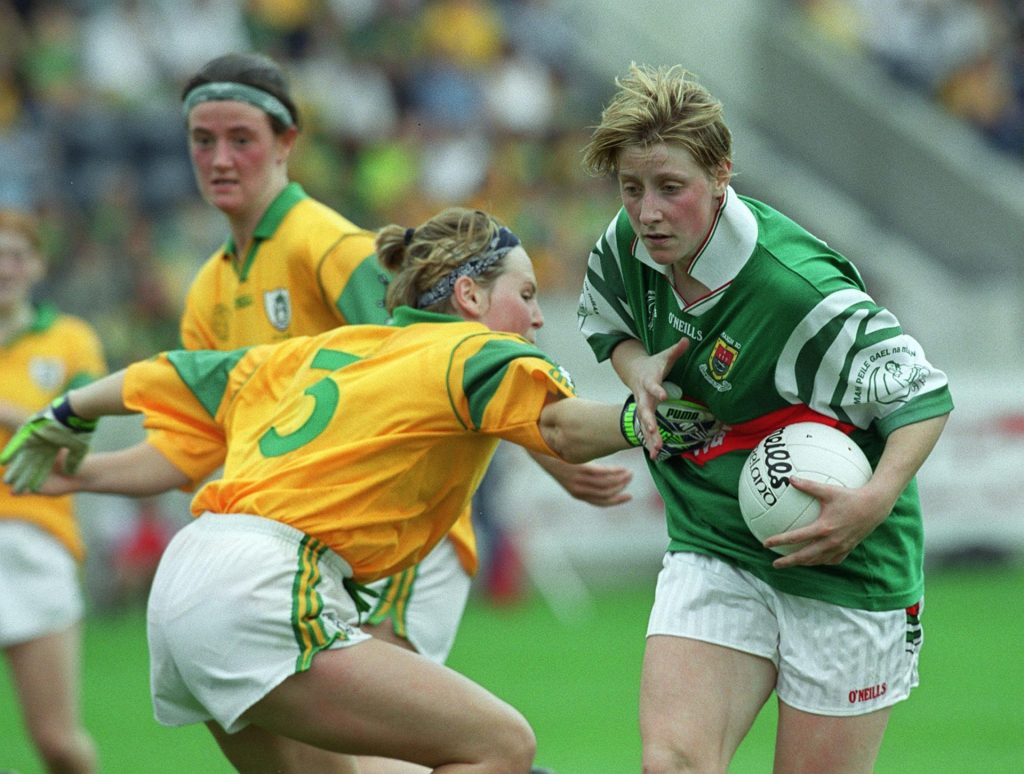 Cora Staunton helped Mayo book a first appearance in the final of the All Ireland Ladies SFC with a semi-final defeat of Meath but injury deprived her of playing more than 90 seconds of the historic decider against Waterford. Picture: INPHO/Lorraine O’Sullivan

No, that isn’t the name of a dodgy band that once took the stage in the Ballroom of Romance but a nod towards one of the headline acts in Irish sport for the best part of two decades.

Looking back now, it seems an utterly mad stroke that the Mayo management pulled on the occasion of the county’s first appearance in an All-Ireland senior ladies final but to the brave go the spoils.

John Mullin and his backroom team decided to start Cora Staunton despite the country knowing she had broken her collarbone in the lead up to the match.

It was the sort of call that was guaranteed to be reflected upon differently had the result gone against Mayo but ultimately Diane O’Hora became the first Mayo woman to lift the Brendan Martin Cup – and the last captain ever to hold aloft a trophy in the old Hogan Stand.

Staunton, already established as Mayo’s attacking chief, lined out at corner-forward until replaced by Orla Casby after just 90-seconds but writing about that day in The Mayo News some 10 years later, goalkeeper Denise Horan said management’s decision to start the Carnacon ace had been endorsed by the entire squad.

“No one begrudged her the right to her place in the parade and the honour of playing in an All-Ireland final – if only for a minute-and-a-half. And no one questioned how sacrificing a sub so early on might impact on the final outcome. Things like that were secondary,” wrote Horan.

Legendary Western People sportswriter, the late Ivan Neill would recall how the formbook indicated Mayo had no chance of applying the brakes to Waterford’s bid to capture a second-successive title, particularly in light of Staunton’s absence, but that the “sheer grit, determination and courage displayed by the Mayo heroines” had brought tears to his eyes on the day.

“I still have visual memories of the magnificent fielding by centre-back Yvonne Byrne and the tormenting run by left-half forward, Sinead Costello, towards the Waterford posts to land a point at a critical stage of the game,” wrote Neill about that game in particular, when he reflected on Mayo’s four-successive All-Ireland final appearances between ’99 and 2002.

25,000 people were in Croke Park that first day as six points from O’Hora, three from Christina Heffernan and one apiece by Imedla Mullarkey, Sinead Costello and Sabrina Bailey helped Mayo to an historic 0-12 to 1-8 win. 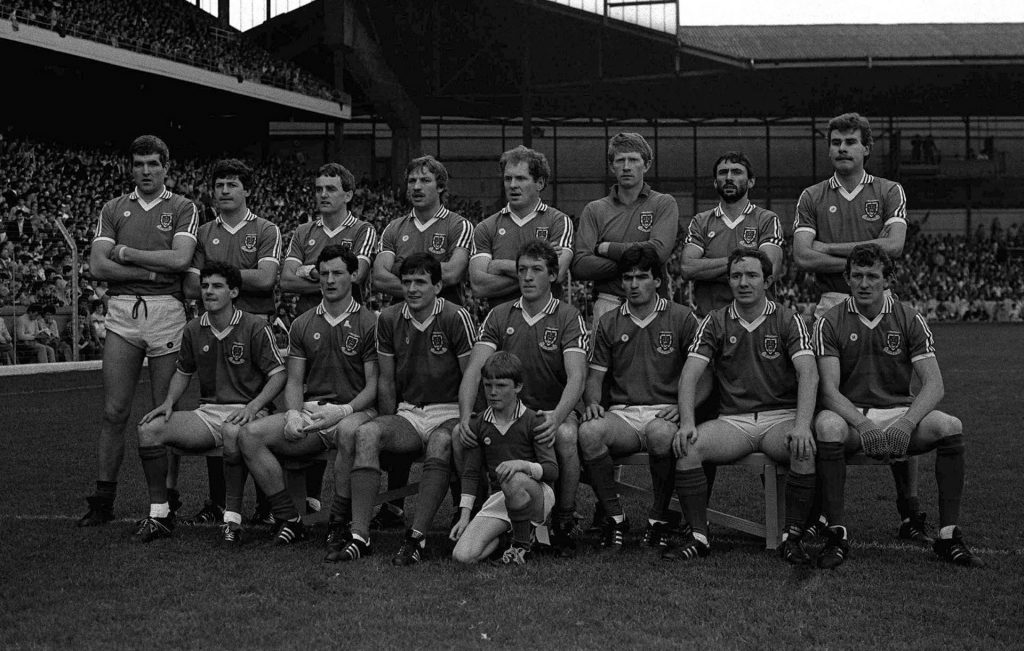 It doesn’t matter how many times you re-watch Padraig Brogan’s thunderous punt to the Dublin net, blink and you’ll miss it every time.

After the exhilarating ‘Whodunnit’ draw, referred to as such because of the mysterious circumstances that landed John Finn with a broken jaw in the 1985 All-Ireland Senior Football Chanpionship semi-final, Mayo had returned to Jones’ Road for the replay three weeks later and led by one point at the interval, and by two shortly after it, despite terrible inaccuracy betraying their monopoly of possession.

However, Liam O’Neill’s charges had, in the second half, slipped four points in arrears by the time O’Neill’s Knockmore club-mate struck a goal that Seán Rice, that doyen of the pen, would later describe as being “one of the best seen at Croke Park for many a long day”.

TJ Kilgallon and Johnny Monaghan emerged from their defensive lair to carry the ball behind enemy lines and hand possession over to the towering Padraig Brogan positioned some 40-metres from the Dublin posts.

Such is the Bomber’s stride that he makes up the next 20-metres with just one hop of the ball before he draws back his left leg like Phil Mickelson might Big Bertha at the 15th tee in Augusta.

Commentator Ger Canning still hasn’t fully delivered the words “And Padraig Brogan is in full flight” when the ball is bouncing back out of the top right corner of John O’Leary’s goal.

Such is the ferocity, you fear the cameraman has suffered whiplash in his effort to follow the shot.

Pity was, Mayo still bounced out of the championship.

The last of a kind 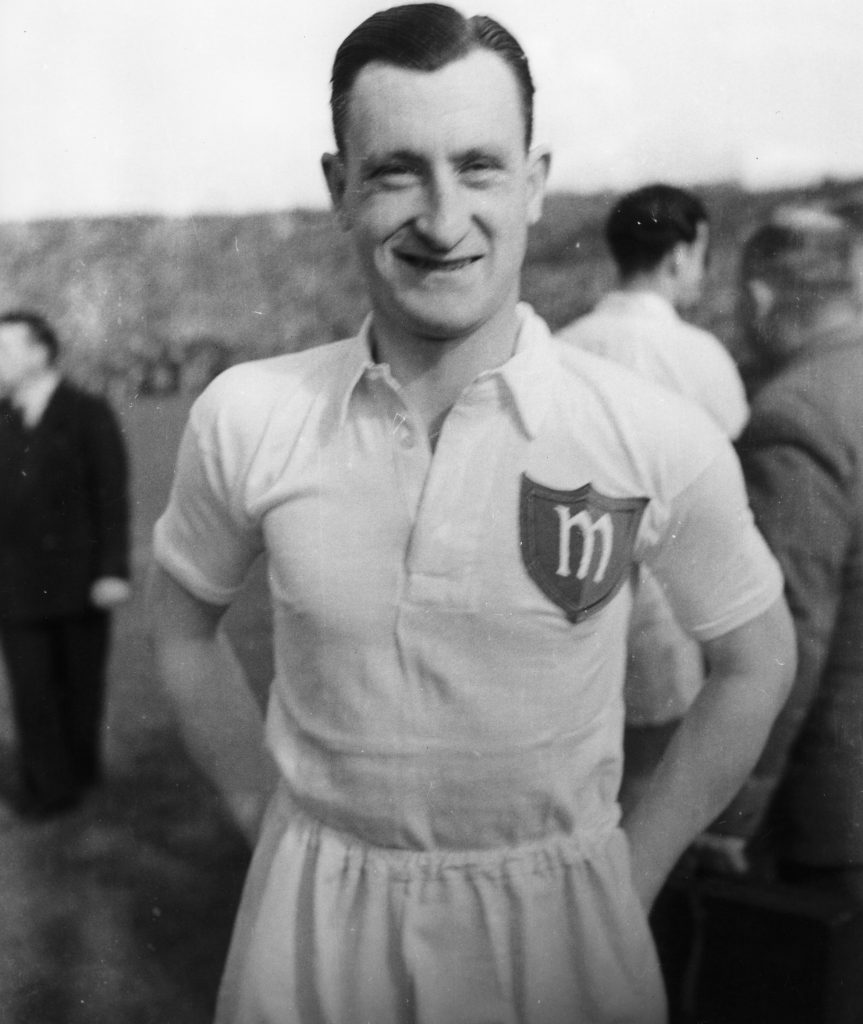 Seán Flanagan, captain of Mayo’s back to back All-Ireland winning team of 1950-51

Immortal they may well be but what’s sometimes forgotten is how close the men of 1950-51 came to never realising their double.

To manage 22 kicks at the opposition’s posts is an impressive achievement in itself but not as impressive as kicking 22 wides and dodging defeat. That was Mayo’s story in their 1951 All-Ireland semi-final against Kerry, which ended with the teams deadlocked at 1-5 apiece.

The reigning champions were actually six points behind with less than 10 minutes left to play but singles by Peter Solan and Seán Mulderrig and a superb goal by full-forward Tom Langan preceded the bailout point by wing-forward Paddy Irwin from all of 40-yards.

A match report of the replay also details how Mayo had some spectacular interventions by goalkeeper Sean Wynne and full-back Paddy Prendergast to thank for their avoidance of defeat.

The final was a repeat of that year’s League final and therefore the input of Pádraig Carney could not be overlooked. Meath had beaten Mayo by three points in the injured Carney’s absence in the League decider but were beaten by five points in the All-Ireland final with the Swinford man back in harness for the Green and Red. 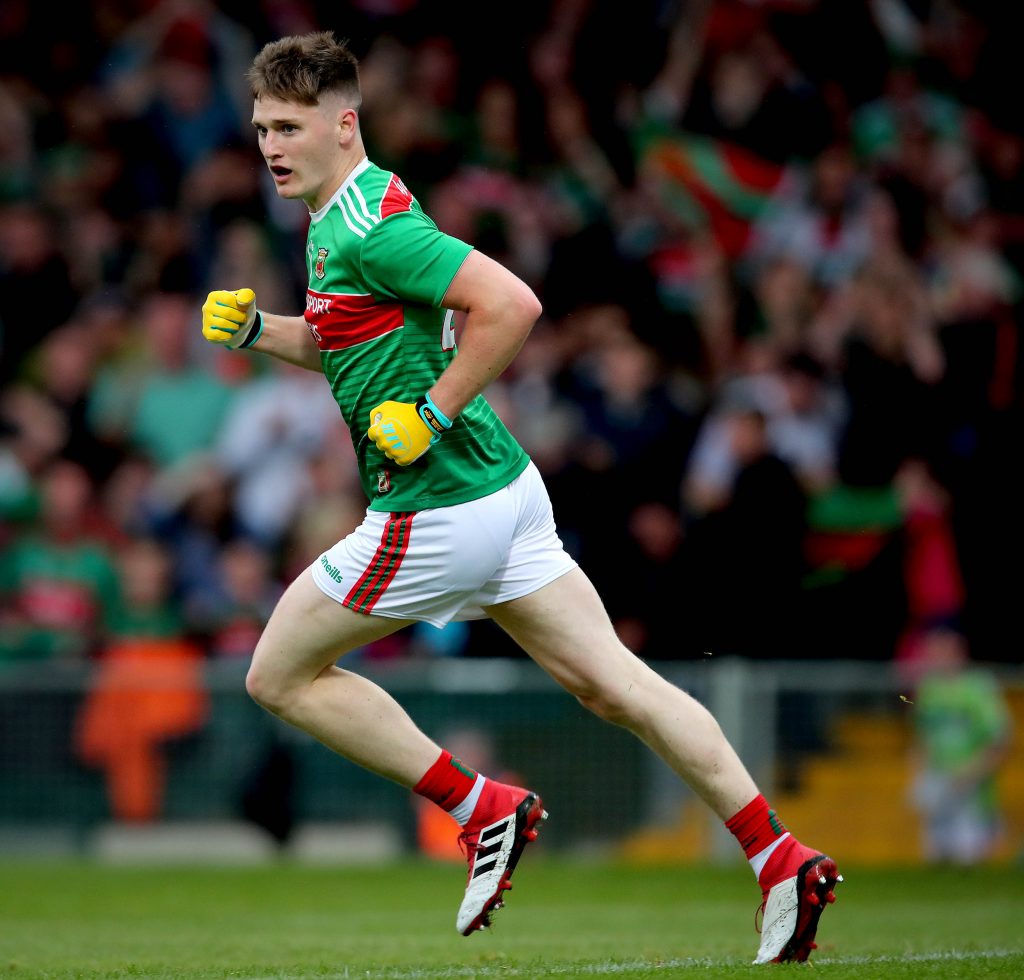 It’s possible that no goal in the history of Gaelic games has ever been watched so widely as the one James Carr stuck to the Galway net on the evening of Saturday, July 6, 2019. By the following Tuesday morning it had already clocked more than 10 million views as sports networks all across the globe picked up on the wondrous pace, power and skill exhibited by the youngster from Ardagh.

People who never before had seen a game of Gaelic football were given some introduction to its beauty when Carr electrified the All-Ireland SFC in this qualifier clash of neighbouring counties in Limerick.

Carr’s debut had only come in Mayo’s National Football League final win against Kerry that spring so maybe it was that he still carried that element of surprise when mesmerising the Galway defence better than Keith Barry might.

Carr was all of 60 metres from the opposition’s posts when he collected Paddy Durcan’s long ball up the uncovered stand side of the Gaelic Grounds, and still tight to the sideline when he crossed the 45-metre line at which point he ducked inside, outside and inside again the Galway corner-back Liam Silke. One man beaten, Carr was like a steam train on the downhill slope as he then flew inside Eamonn Brannigan before unleashing a ferocious shot into the far left corner of goalkeeper Bernard Power’s net.

It’s easy to forget that Carr’s first ever goal as a Mayo senior had only arrived three minutes earlier when he was in the right place to smash home a fumble by Power.