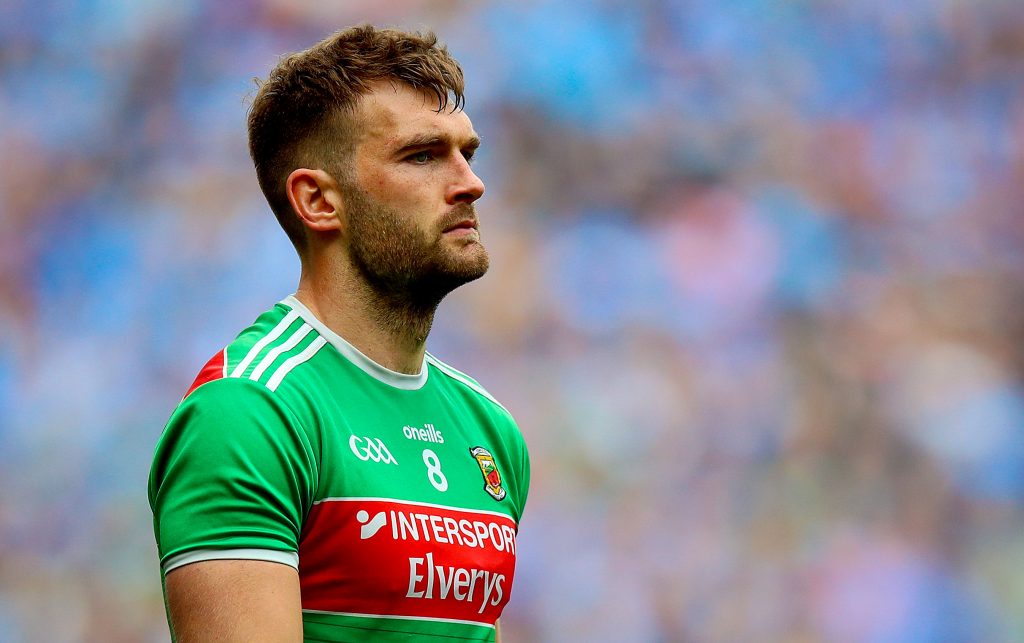 Mayo captain Aidan O’Shea has indicated that several issues, including that of player welfare, will need to be addressed before inter-county activity is able to resume.

It’s the not knowing that is killing Aidan O’Shea at present.
The Mayo footballer is on tenterhooks waiting to hear if the GAA still plans to schedule inter-county games for 2020 but judging by last Friday’s announcement of how the government plans to reopen the country from its Covid-19 lockdown, championship activity is still quite some distance off.
The Breaffy maestro has been describing just how strange the situation, to be training alone for games that may or may never take place.
“You’re training nearly every night of the week, you’re meeting up with the lads and all of a sudden that’s gone in an instant. You miss that interaction.
“Staying within your two kilometres, having a bit of a workout in the house, it is quite difficult. And not knowing when you’ll be back at it is worse,” O’Shea has admitted.
A five stage strategy, one that is set to allow behind-closed-doors sport to take place from June 29 and for club team competitions to resume by July 20, both subject to conditions around social distancing, has at least given players and supporters alike some hope of seeing some action this year. The issue of when mass crowds will be allowed to gather for sporting events is, however, less clear.
“I think everyone is desperate for sport to be back in some shape or form but there’s bigger things at play,” said O’Shea, who was appearing on RTÉ’s Late Late Show in support of the ‘Do it for Dan’ fundraising campaign.
“From a player’s perspective, especially the inter-county game, they’re going to have to consult players around whether they want to play behind closed doors or whether they want to come together in a dressing-room. Or what happens if a player gets Covid-19? What happens their team? All those questions are left unanswered,” said the man named Mayo captain earlier this year.
“I’m desperate to get back playing football. It’s very hard at the moment, not having a focus in terms of our training. I’d love if we could have a championship in 2020 but we need to be realistic and take the experts’ advice over the next couple of weeks, and to be patient.
“We’re in a bit of a vacuum but it would be really good from a players’ perspective if the GAA could give us some sort of timeline because that is the difficulty for inter-county players at the moment,” said O’Shea who, first and foremost, believes the primary focus should actually be on getting the GAA’s club competitions back up and running.
“I think this is an opportunity for the GAA to build back up from the club. If we have a championship this year, wonderful, if not, we have to move on to 2021. But get back to the club scene, get club games going, that would be massive for everybody.”