The Eagles return to roost 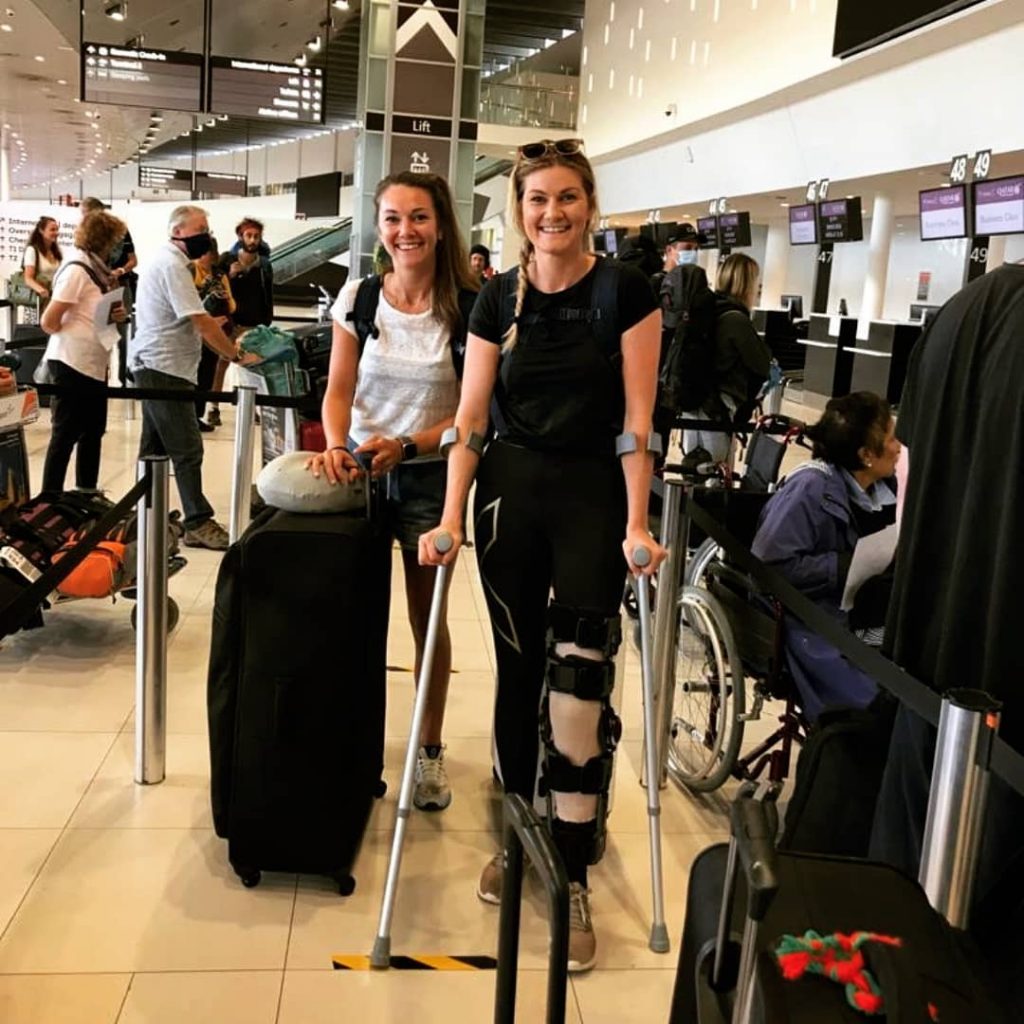 Niamh and Grace Kelly from Bohola pictured checking in for their homeward flight from Perth International Airport.

Grace and Niamh Kelly are back on Mayo soil after their Aussie Rules exploits with the West Coast Eagles down under.

The footballing duo returned to Bohola last Thursday, April 16 after a long trip home, which took in two flights, firstly travelling to Doha before heading for Dublin.

For Grace there was some extra luggage en tow, a pair of crutches after the 25-year old suffered a knee injury in the Eagles clash with Gold Coast the Saturday before St Patrick’s Day.

Not long after returning to home comforts, and starting to settle into a two-week spell in isolation, the sisters spoke to the Western People.

“We were due to arrive home about now anyhow,” Grace said. “It just worked out that my surgery happened instead of two more games. The end of the season would have been around now.”

Niamh added: “I suppose when Grace had the surgery we weren’t really sure if we would definitely get home or not. We were lucky we got a flight home through a travel agent in the end.”

No one knows when anyone will take to the pitches again and when any sport can resume but the break due to Covid-19 is a blessing in disguise for Grace who likely will have her spell in recovery in tandem with the duration of the lockdown – with restrictions expected to last long past the current date of May 5.

“The surgeon who does all the surgeries for West Coast Eagles told me that I’d be six months out of action,” Grace said.

“In four months time I will be beginning to run again and in six months time I’ll be back playing. We don’t know when the Gaelic season is but I’d like to be back for some of it or as much as I could.

“We really hope the Gaelic season will go ahead this year but you just don’t know with the Coronavirus or anything!” It’s certainly a time for taking the positives from the negatives.

“Absolutely, obviously it sucks to get an injury, but if there was a time to get one it probably is now,” admits Grace. “I’m lucky it’s not the ACL because I would have been out for a year if it had been.

“With it being the MCL I know it’s six months and it’s the best time. I can work on other areas of my game while I am injured and work part of my rehab and do what everyone else is doing I suppose in their home gyms!”

The Moy Davitts players are well prepared for a spell in self-isolation thanks in no small part to Mayo Ladies manager Peter Leahy, to whom they made a detour to in Westmeath on their return journey West.

“Peter has been great,” Niamh said. “We arrived at his home about 8.30am and he had I think seven or eight footballs pumped up and ready at the gate, with two Garmin watches as well.

“He had it all set for us and ready to go into it,” Grace added.

“I spoke to you a few months back and I was saying how he is a great chef and that he does so much in the background. Everyone has their specific roles but for one man Peter does so much for us really.

“He keeps improving. Even this year with the Garmin watches, he’s thinking forward all of the time, how we can perform better. He just has a real growth mindset – it’s great.”

The sisters say that despite them being thousands of miles from home and in a different time zone, Peter was always keeping an eye and in regular contact.

“He was, I remember the night before our first game he sent us a lovely message,” Niamh said.

“To be honest after every game he’d send us a message to see if we were alright. In fairness there was always great contact [with the Mayo team] because we were in the WhatsApp group with the girls but he’d send us individual messages as well. We didn’t really feel that far away from home because we were always chatting to them.

“At times like this you are grateful to be part of a team as well. We can all work on our own outside of the group but also driving each other on as well. We all have the same goal.” 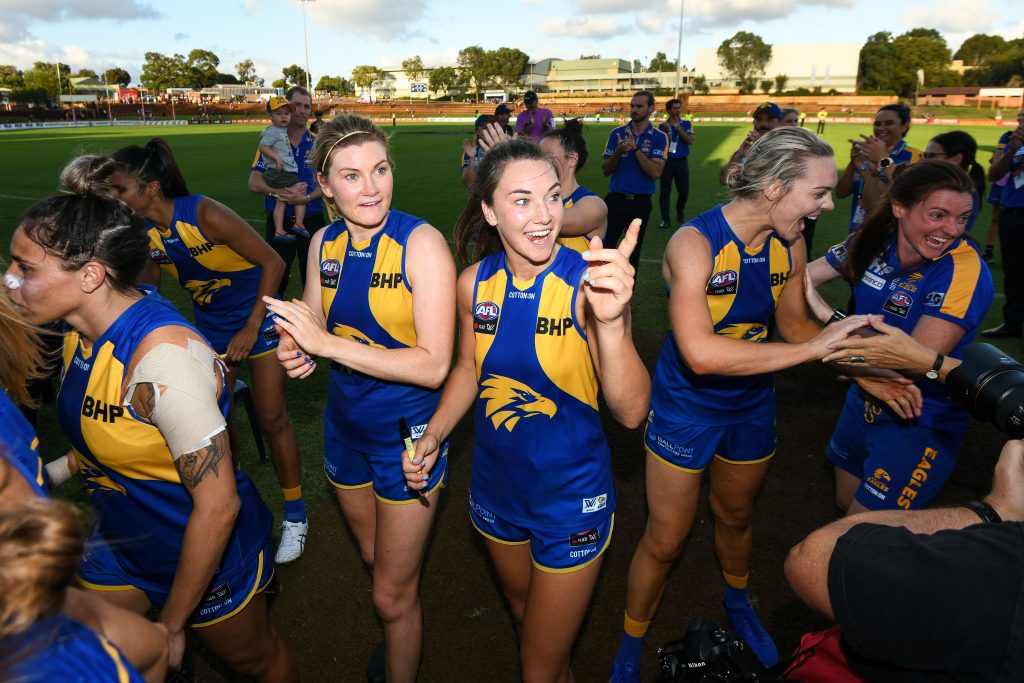 Grace and Niamh Kelly making their way to the dressing-room after the West Coast Eagles’ AFLW Round 4 match against the Western Bulldogs at Leederville Oval in February.

Last year’s All-Ireland semi-final loss to Galway still lingers in the minds, although the sisters admit to having not watched that game back since. They reckon they might put themselves through that job in full in the coming weeks, now that they have more time on their hands.

They kept a close eye on how Mayo were doing during the National League and even got to watch a game live on Facebook. The sisters are delighted with the progress made while they’ve been away.

“It was great that the games were streamed on Facebook Live,” Niamh said.

“We were able to go and watch the girls for a few of the games. Some of the young girls that just came in this year had great games and have really got stuck in in games too.”

Grace added: “You could even see the improvement from the games last year how girls have developed, which is a credit to Peter and all of the management. They have really worked hard on their running and their strength and conditioning. I think it really showed in those games. Hopefully there will be a Championship and they get to show them again.”

There’s been a lot of outrage on social media of late, that flights are still coming into Dublin Airport and that the ports are still operating, but there’s certainly not large numbers of people travelling, as the Kellys can testify to.

“We had two flights. One to Doha and then from Doha to Dublin,” Niamh explained.

“The two flights were very empty. Grace and I were travelling together so we could have seats together but there was always a seat between people and social distance.

“The flight from Doha to Dublin had barely anyone on it, it was about a quarter full, and there was so much space.”

Grace added: “There were people lying across three seats. There was loads of room on that flight and we felt very safe coming home.” “When we arrived into Dublin Airport there was barely any people,” said Niamh. “We were chatting to a security man and he was saying we were the only flight coming in that morning. It was just very deserted and very quiet. We felt very safe, we had the masks on and gloves, and sanitiser and disinfectant wipes – the whole lot!”

Prior to their departure, life in Australia was almost like it is in Ireland at the moment, with one exception.

“There was no two-kilometre radius for exercise but if you were leaving the house it had to be with your family or the people you were living with or you could only be with one person, so you had to be in twos,” Grace described.

For the moment though, it’s about hoping to return to action sooner rather than later and preparing as best they can for whenever an O’Neill’s ball can be kicked in anger on the pitches again. 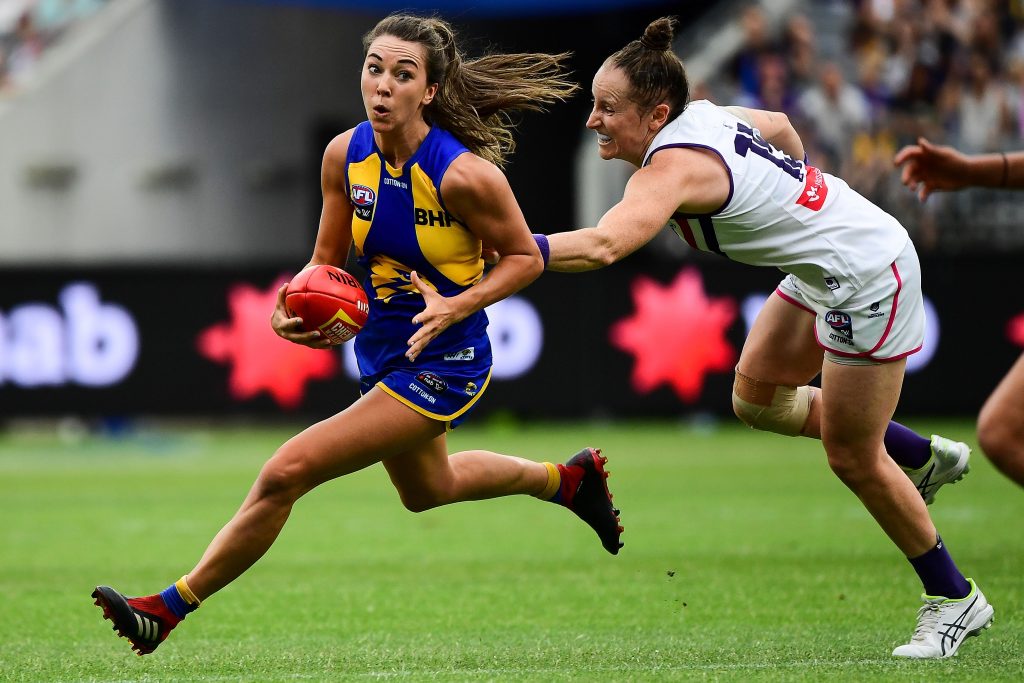 Niamh Kelly tries to evade Kara Antonio of the Fremantle Dockers during Round 2 of the 2020 AFLW season at Optus Stadium in Perth.

“We’ve our own home gym set up as well so we’ll be kept busy. Hopefully the two of us survive this quarantine, that we don’t kill each other!” laughed Niamh.

“We’ll be in isolation but it’s not much different to other people living around us really, only that we can’t go out and shop.

“It’s so strange really because usually you are out training. I was looking forward to going back and getting stuck into training with Mayo. But now it’s about trying to keep fit. We have a running programme to keep us ticking over with Mayo hoping that the season will go ahead.”

But it’s more than just football that will occupy the minds of the Bohola girls these next few weeks, as Grace explains.

Whatever helps get you through.

Littering at Mayo beauty spot is “disrespectful and appalling”