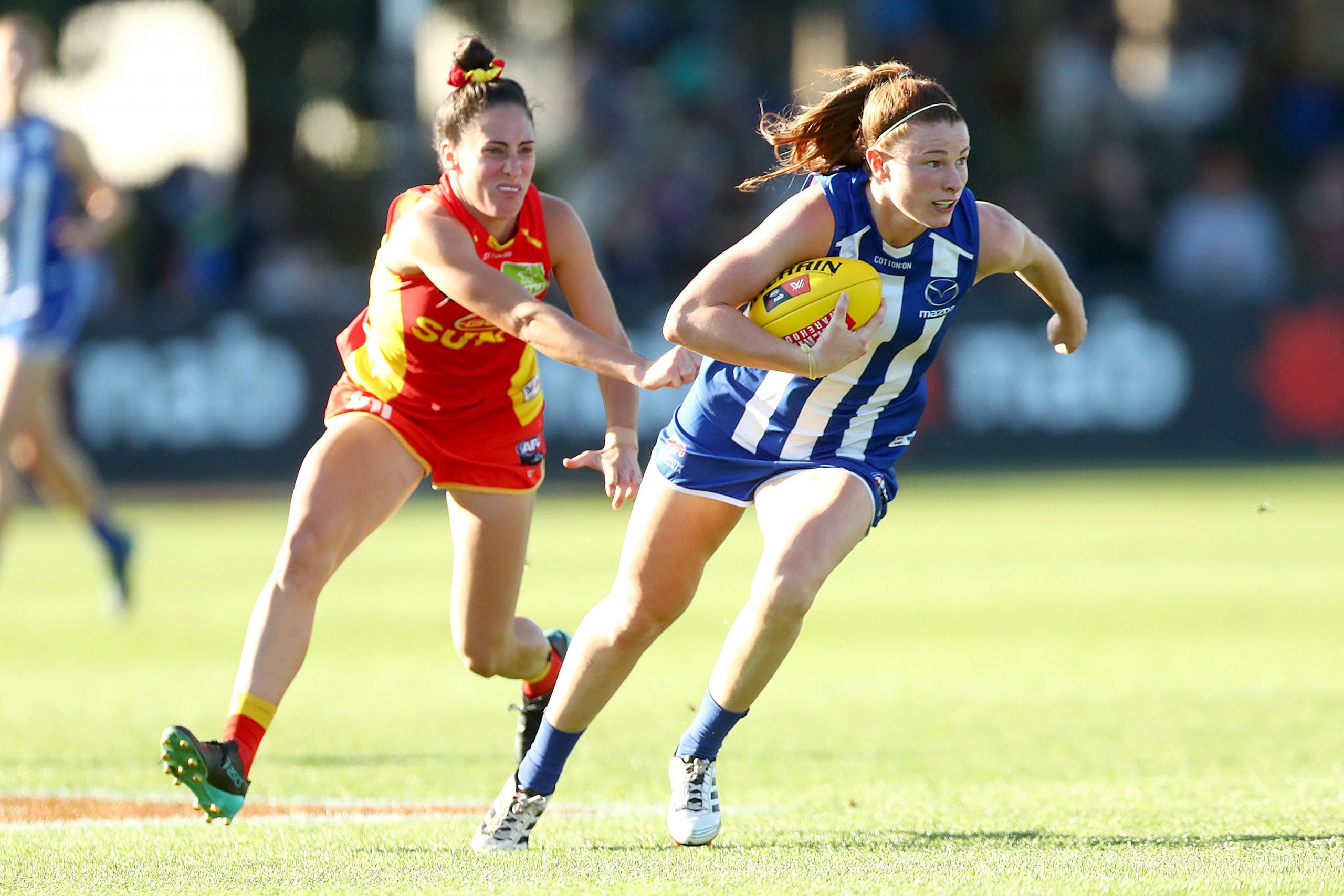 Aileen Gilroy in action for the North Melbourne Kangaroos against the Gold Coast Suns during their AFL Women’s League match at Arden Street Oval in Melbourne on February 29. Picture: Kelly Defina/AFL Photos/Getty Images

Things change fast in Covid-land. Less than three weeks ago, on Saturday, March 21, Aileen Gilroy was playing for North Melbourne in their 34-32 win over Collingwood in the preliminary semi-finals of the AFL Women’s League. Their preliminary final, against Carlton, should have been played the weekend before last. Had they won that, the Kangaroos would have contested a Grand Final against either Fremantle or Melbourne last Sunday. The ‘Roos were one of the favourites for the title.

But that’s all in a parallel universe, one in which the coronavirus hasn’t shut down sport from Melbourne to Moygownagh and everywhere in between. What actually happened was this: the Sunday after the Collingwood game, Gilroy and her teammates got word that the AFLW had cancelled the season with immediate effect. No finals, no winners, an asterisk beside the year 2020 in the record books. Two days later, Gilroy was on a plane out of Melbourne heading for home, her debut season Aussie Rules officially finished.

“There was a flight going out on the Tuesday night and I was able to get a seat on that,” Gilroy said this week. “The day or two beforehand was just trying to get organised. It was a little bit manic for those couple of days.”

A season being called off clearly isn’t the greatest of tragedies right now but it was still difficult for those caught up within it. For Gilroy and her North Melbourne teammates, their ambitions of claiming their club’s first-ever title went up in smoke.

“It was mad to think that we had gone so far and had such a big year for the club, only for it all to be taken from us so suddenly. There were a lot of emotions; I was crying, I was mad, I was upset, I was angry. Those few days were crazy,” she said.

It was an unsatisfactory ending to what was, in the wider scheme of things, a stellar first season Down Under for the 27-year-old. Gilroy played in all seven of the Kangaroo’s regular-season games as well as the preliminary semi win over Sarah Rowe’s Collingwood, having adapted to the game like the proverbial duck to water after first making the trip out last October.

“When I went over there first I didn’t even know how to kick the football, so that was definitely the first thing that I wanted to learn. The club was really good. Any extra sessions that I wanted to do, they would accommodate. So the basic skills, the kicking and handpassing and things like that, they really helped me with,” said Gilroy of the initiation process.

That said, it wasn’t all plain sailing. Gilroy had recovered from a bad cruciate ligament injury to feature for Mayo in their All-Ireland semi-final loss to Galway in August but North Melbourne, clearly keen to protect their investment, were reluctant to introduce her to the more rough-and-tumble elements of the new code until absolutely necessary.

“They were really particular about my recovery,” she said. “I didn’t really get to train fully until November. That was really frustrating for me at the start but obviously it was for the good of my health.

“They were really taking no chances. They knew I had done that knee twice already so their attitude was: we’ll look after it carefully now so we won’t have to deal with another ACL issue in January or February coming into the most important part of the season.”

So instead, she had six weeks of non-contact training to learn the skills of the game and then only two weeks of tackle practise with ‘Roos head coach Scott Gowan before the season began on February 8.

Any frustration Gilroy held over being kept on the stabilisers was put to good use in that Round 1 derby against Melbourne; the ‘Roos lost by two points (their only defeat of the season) but their new signing introduced herself to the league with a crunching tackle on the Demons’ Aliesha Newman that sent her out over the boundary and proved a viral hit back at home.

“I love learning new stuff, and once someone gives up the time to help me, I will improve,” said Gilroy. “When Round 1 came and I saw the opportunity to tackle that girl, I just went for it and took her out of it!” 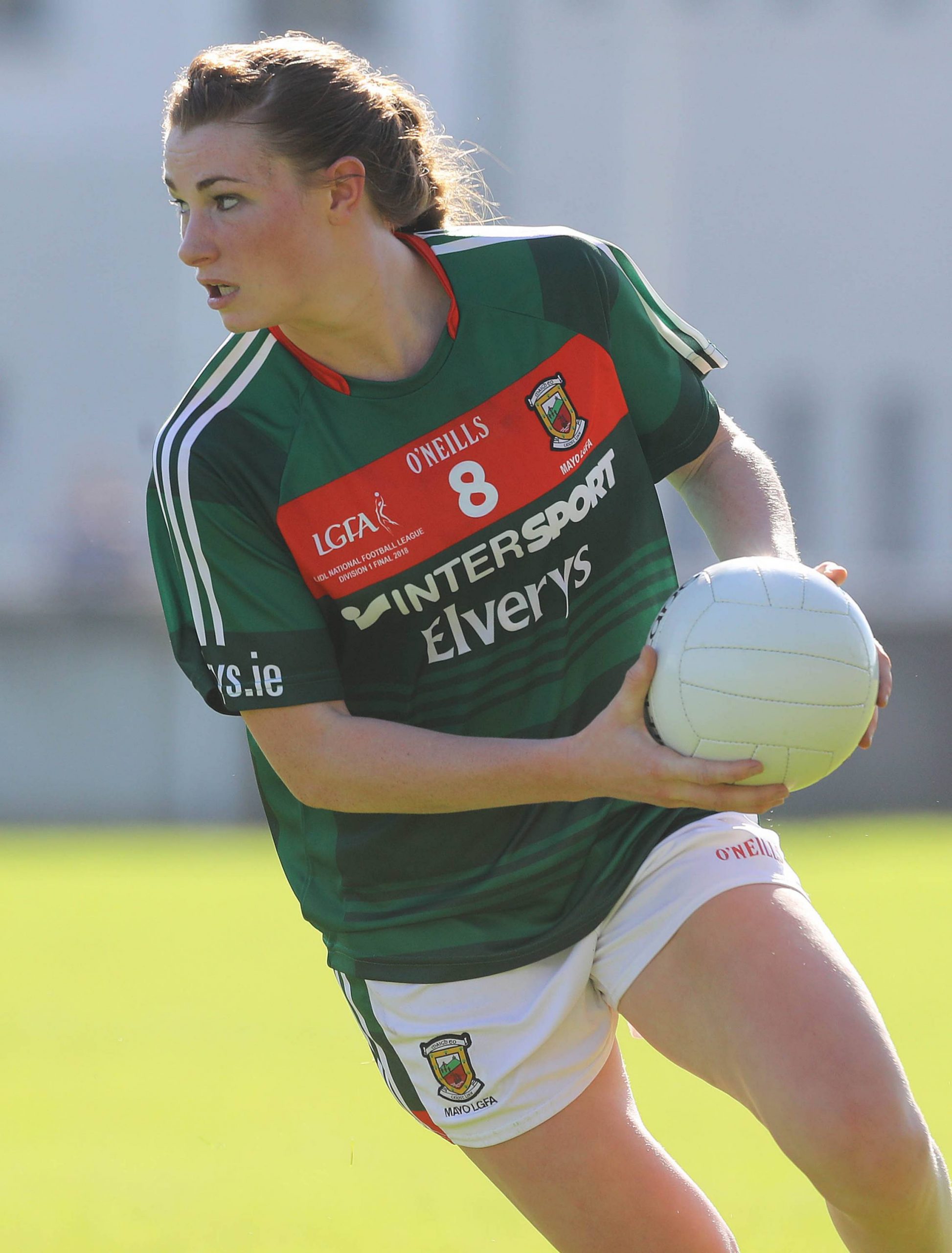 Talking to her, even over the phone, you get the sense of how much Gilroy enjoyed her time in Melbourne. She was living in a house with other Irish players (her North Melbourne teammate Mairead Seoighe from Galway, Aisling McCarthy of Tipperary and the Western Bulldogs and Joanne Donnan of Fermanagh and Carlton), and was welcomed into the Kangaroo organisation from the outset.

“The girls in the club were brilliant,” said she. “Their terms are so different to ours, so it was a matter of getting my head around what they meant some of the time. Mairead was great to bounce stuff off. I was so happy to have her out there with me. That made things a lot easier.

“As the year went on we really started to form a bond with the Aussie girls. They were so nice and so helpful. Our captain, Emma Carney, was amazing, even if it was just bringing us to training. Any questions we had, even if it was just a little thing, they would answer for you.”

Gilroy said the most difficult aspects of the experience were what you might expect; being away from loved ones, and the time difference making phone calls tricky. But she is adamant that the positives massively outweighed the negatives.

“The best part of the experience was living with the girls. I’ve got new best friends now, they’re like sisters to me,” she said.

“Getting the chance to be a professional athlete was class. When I look back on it, since October it’s just been amazing and I’m so thankful for the opportunity they gave me.”

Things are still up in a heap for pretty much every sporting body in the world but that doesn’t mean that some plans can’t be made. Gilroy is very open to the idea of returning next season, once everything settles down, for what will hopefully be a longer campaign.

“We had our exit meeting last week with the management and they’re keen to have me back next year,” said she. “Us getting to the semi-finals this year felt like the start of something. It’d be really nice to go all the way with the girls. I definitely would be looking to get back next year.

“There hasn’t been any contact or talks or anything yet, and the trading window doesn’t open until May 31. But they want me back next year, so hopefully. That’s the plan.”

As for Mayo, she knows about as much as anyone. The league has been cancelled and the championship, though not due to begin until July, could very well be pushed back. Gilroy will go with the flow.

“I was talking to Peter (Leahy) literally as soon as I got off the plane, he was the first man to text me!” she said. “He just told me to be safe and enjoy some downtime and said we would talk again once things are a bit clearer.”

So for now, she’s enjoying the downtime. She has spent her two weeks of isolation at home in Killala playing the Wii and going for her 2k runs up and down an old bog road near the family home. It’s not an AFL Grand Final, but it’ll do for now.