Yesterday (Saturday, April 4) should have been Aintree Grand National Day, one of the greatest occasions in British sport, but the coronavirus has put paid to Tiger Roll’s bid for a third successive crown. Seventy-three years ago, Mayo had its own Tiger Roll in a plucky little horse named Lough Conn, which carried the hopes of an entire county as it lined up in a field of 57 (yes, FIFTY-SEVEN!) horses at the famous Liverpool venue on a misty Saturday afternoon in late March 1947.

Lough Conn’s journey to national and international prominence was anything but conventional. Purchased as a yearling by the Rowe family from Ballina at the Ballsbridge Sales in 1937 for just 30 guineas, Lough Conn spent the war years working as a plough-horse while also taking part in point-to-points and doing a bit of hunting. He showed early promise as a chaser at Ballinrobe Racecourse before bursting onto the racing scene in Ireland by winning the Punchestown Cup in 1944, only days after drawing the plough in a field in Kilfian!

Lough Conn was trained by Kilfian man Frank Boland and the horse quickly earned a reputation as a brilliant jumper. He didn’t have size on his side; in fact, Lough Conn stood at 15-2, the same size as Tiger Roll, and was plying his trade in an era when the Aintree fences were far more formidable than they are today – as evidenced by the incredible footage from British Pathe we recently unearthed.

Lough Conn’s preparation for Aintree was also hampered because of the weather conditions in Ireland in the early spring of 1947. That was the year of the infamous Big Snow and Lough Conn, who had missed most of the pre-Christmas period due to injury, was unable to race or even train for several weeks before the Grand National. No wonder, then, he arrived at Aintree a 40-1 outsider.

But Frank Boland and the Rowes had somehow managed to keep their horse in shape at a time when the entire West of Ireland was under several feet of snow. Lough Conn took an early lead at the first fence and navigated his way through the next four miles, even avoiding a trio of loose horses who persistently hampered his jumping. Unfortunately, one of those horses heavily collided with Lough Conn at the third last fence, which offered an opening to another Irish horse, Caughoo, an even greater outsider at 100-1. Caughoo, named after a village in Co Cavan and owned by the McDowell Jewellers’ family from Dublin, cantered to the finish line and ended up beating Lough Conn by about 20 lengths.

But the victory was not without controversy. Aintree was shrouded in a dense fog that afternoon and the visibility was so bad only a handful of the crowd actually knew what horse was passing the post in front. Lough Conn’s jockey Dan McCann later alleged that Caughoo’s rider, Eddie Dempsey, pulled up at the 12th fence and kept his horse hidden in the fog while the rest of the field completed another full circuit before rejoining the race for its concluding stages! The incendiary allegation persisted for years, although photographic evidence later emerged to suggest that Caughoo did indeed take part in the entire race.

Lough Conn received a hero’s welcome on his return to Ballina. Some 3,000 people turned out as the horse – led by the local brass and reed band – was paraded through the streets to the Market Square, which was ‘ablaze with tar barrels’, according to the Ballina Herald’s account of the homecoming. 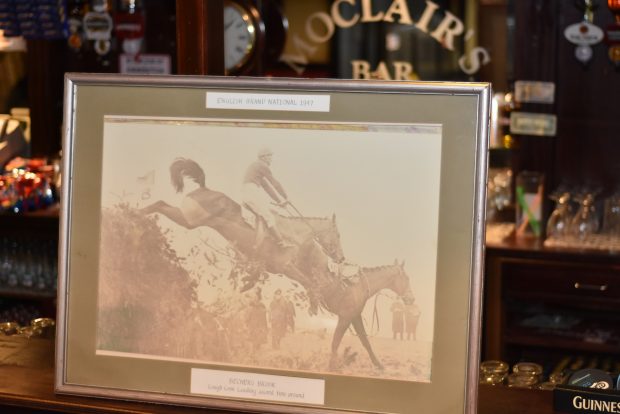 Numerous people in Mayo backed Lough Conn on each-way bets and won handsome sums at odds of 10-1, although not as much as the Clare farmer who backed Caughoo and won €3,000, one-third of which he gave to the Pope to help starving children around the world.

This writer first became aware of the incredible story of Lough Conn and the 1947 Grand National after a conversation a few years ago with John Rowe whose parents owned the horse. John was just seven years old in 1947 and he proudly recalled leading Lough Conn through the streets of Ballina at the famous homecoming all those years ago. John passed away just a few weeks ago and this article is dedicated to his memory – he was one of nature’s true gentlemen. May he rest in peace.

Can Ewe believe it: Sheep numbers on the rise in Mayo