Other Voices Ballina with David Gray on TV tonight

Episode six of Other Voices, a one-off special devoted to David Gray’s intimate gig in Ballina will air on RTE 2 tonight at 11.30pm.

David Gray was one of many wonderful artists to play in Ballina as part of the highly acclaimed Other Voices festival which took place at the end of February. 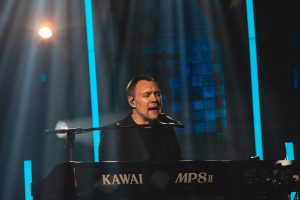 David Gray gave a powerful and emotionally charged performance at Other Voices – Ballina in February of this year.

David Gray is widely regarded as one of Ireland’s favourite musicians and his seminal album ‘White Ladder’, which is 20 years old this year remains the biggest-selling album in Irish chart history.

Viewers are invited to witness Gray’s distinctive blend of emotive songwriting and unique vocal stylings in the beautiful location of St. Micheal’s Church in Ballina from the comfort of their living rooms.

Other Voices will also be starting a new weekly newsletter. Music lovers can sign up to get full episodes of Other Voices, playlists, new and archive performances released every Wednesday. Sign up link and information here: https://othervoices.us6.list-manage.com/subscribe?u=4eea1b76d8a52b3753b4e2024&id=787464c5c9

Other Voices David Gray Special airs tonight on RTE 2 at 11.30 and is available worldwide via the RTE Player.

Check out this promo clip ahead of tonight’s show.

Filed under: David Gray, Other Voices, rte 2, whats on tonight

Ballina resounds to Other Voices