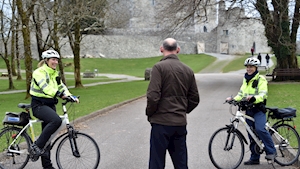 Gardaí have stepped up patrols of outdoor amenities such as Killarney National Park to ensure social distancing and offer advice on recommended physical distance guidelines.

This is as a response to the Covid-19 precautions and the current situation with school closures and more people forced to stay at home resulting in “greater use” of the National Park, confirmed Superintendent Flor Murphy. “As a consequence, we want to have a presence and offer advice, in the last few weeks we have been proactive in this,” he told the Irish Examiner.

“This will continue this weekend. The patrols take place every couple of hours and involve a garda car, van or mountain bike.”

These patrols are not just in the areas of Killarney National Park close to the town centre — Knockreer and Killarney House & Gardens — but also operate in Muckross Gardens and around Ross Castle, added Supt Murphy, and the patrols have “accelerated” in the past couple of days.

There are no plans to close the park, in contrast to gardai’s closure of popular Kerry attraction Banna Beach last Sunday on health and safety grounds as a bank holiday-like atmosphere around many parts of Ireland.

Taoiseach Leo Varadkar noted on Tuesday how Gardaí will increase interventions where venues are not in compliance with, or where groups of people are not adhering to recommended physical distancing.

Users of beaches and public areas can be “well dispersed”, added Supt Murphy.

“I think this weekend will tell a lot as to the next steps to be taken,” added Supt Murphy.

One outraged social media user in Killarney noted: “Sorry to have to post this but I feel a small bit angry at what I witnessed today in Muckross. Not to exaggerate the traffic on the Muckross Road today was like traffic on a bank holiday weekend. I saw groups of people walking on narrow footpaths where social distancing was impossible to observe. I know we all need some fresh and bit of exercise but must we all gather in a few popular areas and heighten the risk of contracting the coronavirus which is highly infectious and deadly for some.”

Meanwhile, Kerry County Council confirmed that in coming days it would be erecting signage at the busier beaches advising people on physical distancing.

“Kerry County Council has no role or doesn’t have powers in closing beaches or public areas which is a matter for the gardaí, as happened at Banna on Sunday. But in the coming days, we will be erecting signage at the busier beaches advising people to observe the social distancing guidelines (likely the end of the week as the signs are still being made),” said Owen O’Shea, Kerry County Council.

“In terms of closures otherwise, the likes of the Killarney Sport and Leisure Centre, Tralee Sports Complex and Tralee Bay Wetlands Centre are all closed.”