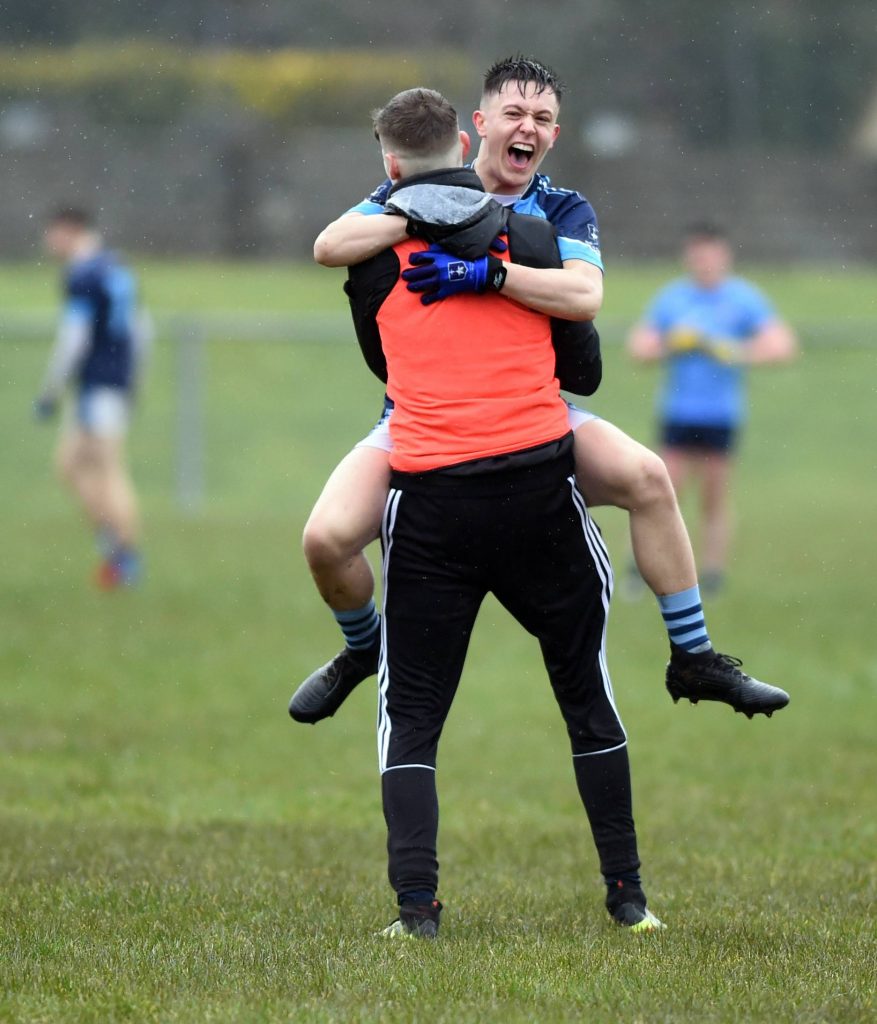 The fireworks were still crackling in the background as the players, management and supporters of St Gerald’s College soaked in the moment after their Connacht Colleges Senior ‘A’ title victory last Saturday afternoon, a first for the Castlebar school since 2014. Daniel Forde, the joint-manager of the team alongside Tom Neachtain, said that his players had done everything that he and his management team had asked of them.

“I’m delighted,” stated Forde. “Everything you look for in a performance, you got it there. They really battled for 50/50 balls, the tackling was so strong. We could have been a bit more disciplined but otherwise we worked really well. We really killed them on the opposition kick-outs in the second half.

“I thought we played with a bit of style too, we were kicking balls in, our delivery was strong. Everything we were looking for, we got, so I’m delighted for the lads.”

Cillian Redmond’s goal just before half-time had been the decisive moment of the game, helping Gerald’s into a one-point half-time lead after an opening period in which Summerhill had arguably been the better side.

“Summerhill came so strong. Their free-taker (Eoghan Smyth), out there in that wind – we don’t have a free-taker like that! He’s an outstanding talent and they’re a fine team, and we knew having gone to extra-time in the league final that it was going to be tight.”

Gerald’s joint-captains (and Connacht title-winning Mayo minors in 2019) Paddy Heneghan and Oisin Tunney had driven their school on from centre-forward and centre-back respectively and Forde said their attitude had been a source of inspiration to the rest of the team.

“There’s a nice balance to this team, there’s strength all around the field. I thought our subs were brilliant today. I’ve been involved in Gerald’s football at senior level for seven or eight of the last ten years and this was one of the hardest teams we’ve ever had to pick.”

Castlebar Mitchels clubman Heneghan had kicked five points for Gerald’s, two from play, and had led the line brilliantly as the Castlebar men turned the screw in the second half. He said after the game that his team will quickly refocus their sights on an All-Ireland semi-final meeting with Tralee CBS in two weeks’ time.

“It’s unbelievable,” he said. “It’s what we’ve dreamt of all year and to finally get this opportunity is unbelievable. We can’t wait now for the All-Ireland series and hopefully we make a good crack of that.

“I think we all believe that we’re ready. We played Tralee in a challenge game so we know they’ll be a tough test. They’re another footballing school and they have great footballers down there, so hopefully we can give it a good crack again.”

Tunney, from Breaffy, said the win on Saturday had been the culmination of all the hard work the Gerald’s players had done since last September.

“We’ve been working for this all year. We’ve put in the hard work, we’ve done the runs and our squad is serious. From 1 to 35 we’ve been pushing it, every single player has been dreaming of getting on the team and you can see today, compared to the semi-final, players are coming in and out because we have such a strong squad,” said Tunney.

“This is what I love, being out here with my friends. I’ve been friends with some of these lads since I was four years old and to win with them is serious. We’ve all bonded this year through hard work so it’s great to win.”