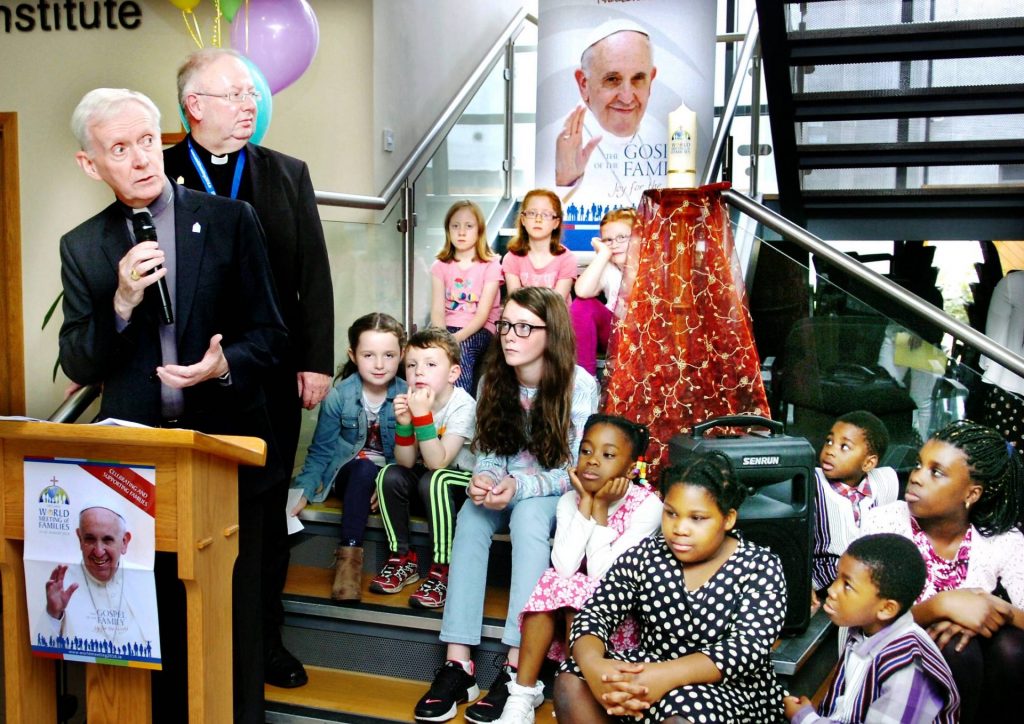 Bishop of Killala John Fleming addresses the attendance at the diocesan launch of the World Meeting of Families in The Newman Institute Ballina in 2018. Picture Henry Wills

Back in 2015, which seems a long time ago now, the priests of Killala diocese (north Mayo and west Sligo) began to discuss what we could do to arrest the decline of our church – a decline that was distressingly quantifiable and tangible.

Despite our best efforts we didn’t come up with any answers. It just seemed beyond us. Unsurprising, of course, because the background to our reflections was the obvious, unassailable truth that whatever might be done wouldn’t be done by priests.

A crunching of the figures had brought a vital statistic into the mix – by 2032 there would be between five and seven priests left to serve the 22 parishes of Killala diocese.

So whatever future our diocese might have, it was clear that it would have to be driven by ‘lay-people’ (excuse the diminishing label!).

So the decision was (i) to ask the people and (ii) to implement what they wanted.

We got going in 2017, with the full support of Bishop John Fleming, the priests and a steering committee representative of priests and people.

The first stage was asking the people what they thought needed to be done. For over a year, we held meetings, visited parishes, organised a survey to elicit suggestions and proposals and held a diocesan assembly.

Our guiding principle was the need for respectful listening in order to surface what people actually wanted – as distinct from what they sometimes told us. So the survey had to have an open agenda, be anonymous and confidential, and by employing an independent agency (The Institute for Action Research, Kerry) to analyse the results and using an electronic voting system to ensure privacy of voting for the 300 delegates from the 22 parishes, it ensured that the results were real.

After the survey was completed we were happy that we knew what the people wanted because the confidential survey, the secret voting and the independent analysis together ensured that. They also indicated that this wasn’t a box-ticking exercise but a genuine attempt to create a pathway into the future that respected what the people said and committed the diocese to implementing what they said needed to be done.

Now that we knew exactly what people thought and what they expected, we set up ten ‘Focus Groups’ to suggest how what people wanted might be implemented. Some 140 people, including 25 priests, in ten groups, spent most of a year working on that. That was the second stage.

Now, in March 2020, we’re coming to the final third stage… action. The first stage was ‘What to do?’ The second was ‘How to do it?’ The third, the most difficult of all, is ‘Doing it!’ And that’s where we are now.

Our guiding principle is, as Pope Francis keeps telling us, that people, priests and bishop are on a common journey working together, discussing, deciding. Francis calls it ‘synodality’, and he believes it is the Church of the future.

The task now in Killala diocese is to implement over 100 decisions, in ten areas, decided on and prioritised from first to sixth in order of importance by the people – on Prayer, Management of parishes, Family, Inclusion, Deacons, Women in the Church, Youth, Vocations, Education in the faith, Lay participation.

Our area of operation will be the deanery unit – a group of parishes – where bishop, priests and Parish Pastoral Councils will together implement the decisions prioritised by the 300 parish delegates in the diocesan assembly.

As was clear from the beginning, much of the responsibility and much of the work, will fall on the ‘lay’ members of the newly-formed diocesan Action Committee – 24 members in all (Bishop Fleming, three priests, 14 women, six men) – and this thrust is clear in the symbolic election of three ‘lay’ leaders – Patricia Melvin, Peter McLoughlin and Anne Sweeney.

It’s very encouraging that the priests of the diocese have supported this initiative from the beginning but, knowing what the future holds in terms of priest-numbers, implementing the decisions of the diocesan assembly will (apart from the ongoing support of priests) need to be driven by ‘lay’ people.

At the deanery meetings, members of the Action Committee will present the first policy decisions to the priests and members of the Parish Pastoral Councils (PPCs) and implementation is planned to begin in September 2020 in all parishes of the diocese.

It could be said that this initiative should have taken place years ago, that the Catholic Church (as is said) often arrives ‘a bit breathless and a bit late’. But, as someone memorably put it, ‘we are where we are’.

Yes, fewer now seem interested, fewer come to Mass, the young seem to be abandoning the Church in huge numbers, so many have moved from disappointment to anger to hostility and all the way on to apathy.

Priests are fewer, older, working harder, more stressed and some breaking under the load. Finances are contracting and change (as in other areas) continues to move us beyond where anyone imagined we might be.

That said, in hope and in faith, we need to do what we can and the Killala initiative is an honest effort by people and priests to re-state our conviction that a Christian faith engaging with the lives we lead is an enrichment beyond words and we need to hold on to it, literally for dear life.

That’s what Bishop Fleming and the priests of the diocese have committed themselves to do. The hope now is that the people of Killala diocese will give this important, indeed historic initiative, a fair wind.