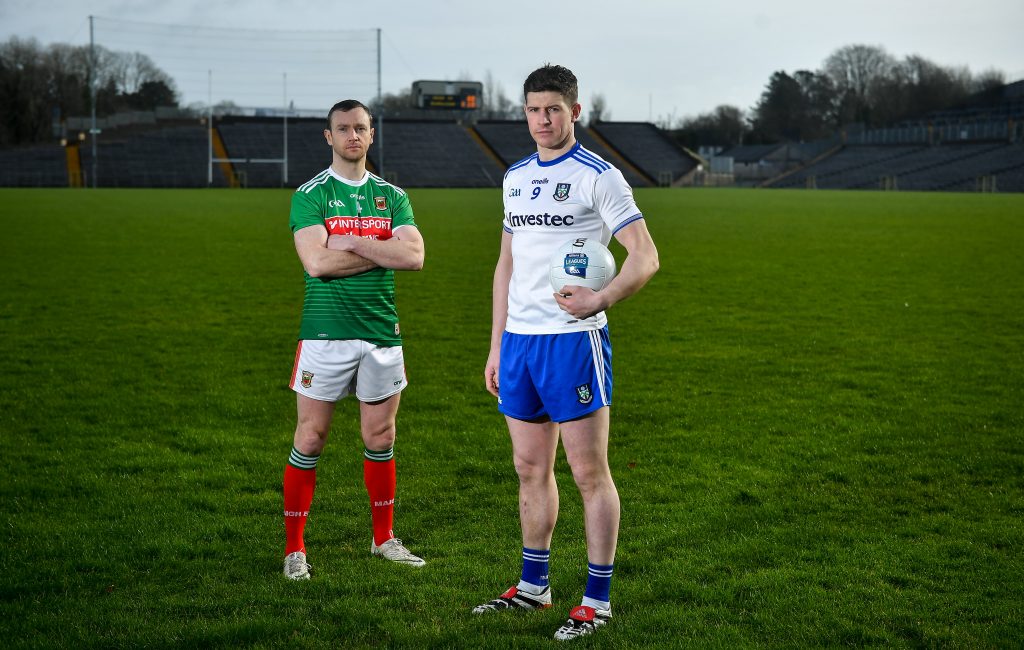 Keith Higgins of Mayo and Darren Hughes of Monaghan during a Media Event in advance of Sunday’s Allianz Football League Division 1 Round 4 match at St Tiernach’s Park in Clones. Picture: David Fitzgerald/Sportsfile

As the 2020 National Football League season rolls into its second phase this weekend, barely the width of a cigarette paper separates the top seven sides in Division 1. Seven teams are crowded together with just a single point to split them after three games, from Dublin at the top of the pile and Mayo currently in seventh. Meath, after their loss to Mayo in Navan, are pointless after three games and would need a minor miracle to avoid dropping straight back down to Division 2 after a single season at the top table.

Mayo and Monaghan, who are next up in one another’s sights in Round 4 this Sunday, are both on three points after three games with a win, a draw and a loss on their respective ledgers. Monaghan lost away to Galway on the opening weekend, defeated Ulster rivals Tyrone in Round 2 and conspired to cough up a six-point injury-time lead to draw with Dublin in Croke Park last time out.

Despite that set-back, it has so far been an encouraging campaign for the Farneymen under the stewardship of Seamus McEnaney. ‘Banty’ took up the reins in his native county for a second stint last autumn when Malachy O’Rourke stood aside after seven seasons at the helm, during which he delivered two Ulster titles, brought the county to an All-Ireland semi-final in 2018 and established Monaghan as mainstays in Division 1, where they have enjoyed unbroken residence since they came up in 2015.

Mayo and Monaghan have clashed in every league season since and the record over those five years is heavily tilted in favour of the Connacht men. Of the five league meetings over the last five years, Mayo have won four times and lost only once, when Monaghan earned a 1-11 to 0-12 win in Castlebar in 2017.

More recently, Mayo were winners in a fractious Round 1 win in 2018, when Paddy Durcan kicked a late winner against a Monaghan side who finished the match with just a dozen men on the field. Last year, Mayo won a high-scoring Round 7 clash in Castlebar by 3-15 to 1-18 to earn a place in the league final.

Monaghan togged at something approximating full strength against the Dubs last time out and would have been disgusted not to hold out for what would have been a third straight league win over the Metropolitans. All of Rory Beggan, the Wylies, Ryan McAnespie, Karl O’Connell, Darren and Kieran Hughes, Conor McCarthy and Conor McManus started the game, with McManus bagging a dazzling 1-4 and Beggan kicking three long-range missiles over the bar, but a late Kevin McManamon goal and point from Davy Byrne in the 80th minute earned Dublin an unlikely draw.

James Horan said after the win over Meath that both Cillian O’Connor and Donal Vaughan, neither of whom have featured for Mayo so far this year, are “progressing well” in their returns to match fitness and one or both could potentially see some game-time in Clones, while it was hoped that Keith Higgins and Tom Parsons will have recovered from minor injury concerns to be in contention for the squad. None of those, however, were selected in the team released by Horan on Thursday morning. Oisin Mullin does return to the team after missing the Meath game while on duty with the Mayo under-20s.

A win on Sunday would set Mayo up well for the remainder of the campaign and keep their chances of defending their National League crown very much burning. With Kerry scheduled to come to Castlebar the following Saturday evening (February 29) and the contenders so tightly-bunched together, two more points in Clones could prove invaluable as the league season approaches its climax.

Horan admitted after the win in Navan that Mayo are yet to truly find their stride in this campaign, and it’s worth remembering that but for late goals from James Durcan and Kevin McLoughlin against Donegal and Meath respectively, Mayo could very feasibly be out of touch with the leading pack already.

“We’d be happy with three points, considering the level of our performances,” said Horan. “We’ll keep improving, keep working and hopefully put in a better performance up in Monaghan.”

An improved performance from those Mayo have produced so far in this campaign will be required if they are to get out of Clones with the win; Monaghan are one of the in-form teams in the division, as evidence by their impressive win over Tyrone and their even more impressive display against Dublin, even if they ultimately didn’t see the job out.