An afternoon with the alleycats

The best handball players in Ireland congregated in Mayo over the weekend for the Irish 4-Wall Adult Nationals. Mark Higgins took a spin to Aughagower to take in some of the action. 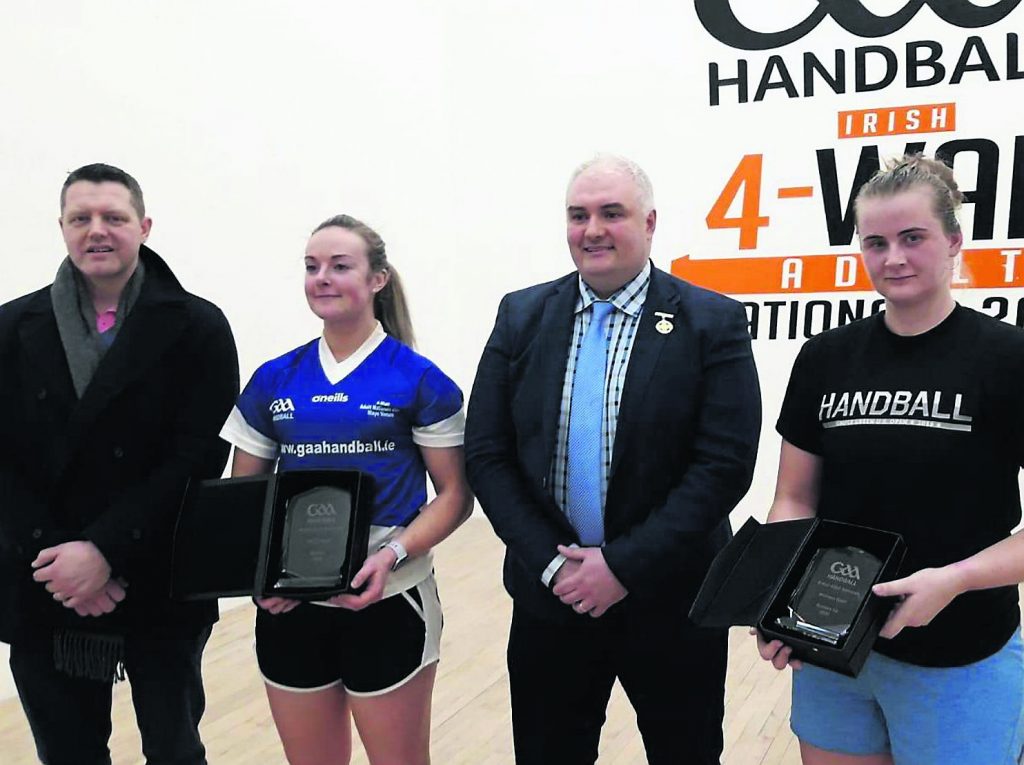 The roads were in bad shape on the trip from Galway to Aughagower last Saturday morning. Some of the puddles were the sort that are easier to cross by boat than by car; wade in without due care and you might not be coming out.

Storm Dennis had his way with plenty of sporting fixtures around Mayo and the country at large over the weekend but the Irish 4-Wall Adult Nationals, one of the marquee events on the Irish handball calendar, had the distinct advantage of taking place indoors. Assuming you made it to Aughagower in one piece, you had the luxury of sitting back and watching some of the world’s best handball players in warm, dry comfort.

The village at the foot of the Reek was one of ten different venues around the county hosting the Nationals on Saturday. The alleys of Newport, Carnacon, Kiltimagh, Claremorris, Bofield, Ballaghaderreen, Ballinrobe and the Sportlann and St Gerald’s in Castlebar were also humming to the rhythm of rubber on timber across the various divisions.

The Western People went to Aughagower for the showpiece competition, the Men’s Open, into which 14 of the best players in the country had been entered. This year’s event has the added lustre of a rare appearance in domestic singles play by Paul Brady, the five-time world handball champion from Cavan widely regarded as the best player the game has ever produced.

Brady hasn’t played singles in Ireland since winning a record tenth All-Ireland Singles title in 2013. Since then he has played predominantly on the US circuit and claimed a record-levelling 11th US National title last June. But the former Cavan footballer is making a surprise return to compete in this year’s All-Ireland Singles Championship, which takes place this weekend, and was in Aughagower to fine-tune his game.

Brady was far from the only big gun on show, however. Also among the 14 entries in the Men’s Open were Robbie McCarthy, the reigning All-Ireland champion from Westmeath; Martin Mulkerrins, the Moycullen man who won the All-Ireland in 2018 and is one of the favourites for this year’s title; and Diarmuid Nash, currently ranked number 2 in the country. There were also a couple of hometown players in the field, including Ian McLoughlin from Newport and Vinny Moran from Ballaghaderreen. 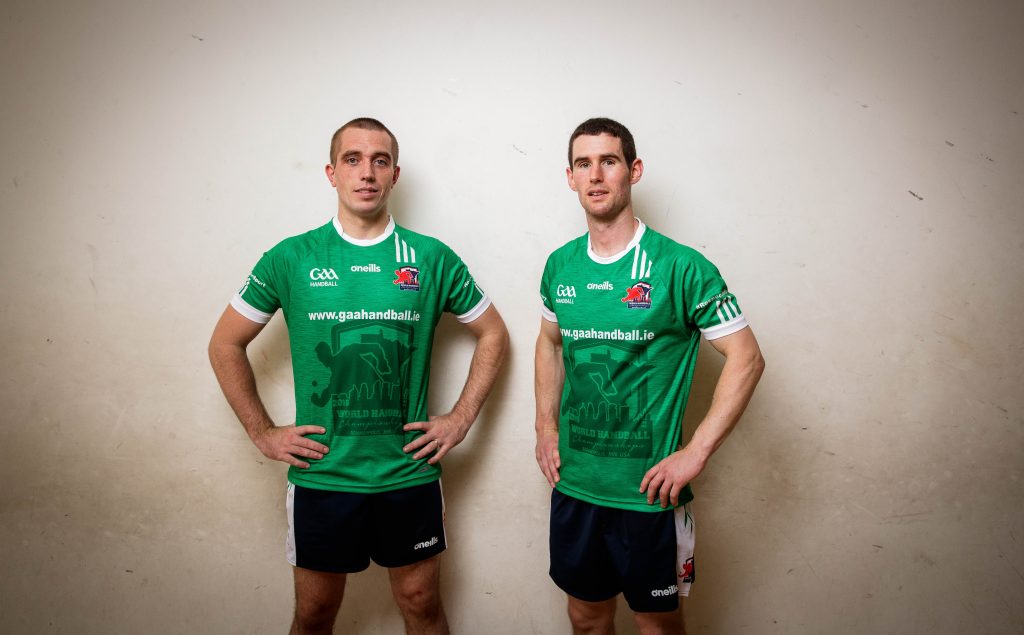 Robbie McCarthy and Diarmaid Nash were two of the big names on show as Aughagower played host to the at the Irish 4-Wall Handball Championships. Picture: INPHO/Ryan Byrne

Saturday’s play began with a victory for Niall O’Connor from Kildare over Wexford man Gavin Buggy, before amatch between Newport man McLoughlin and Ger Coonan from Tipperary which lasted well over an hour. McLoughlin stormed into a lead in the first game, leading 13-3 and 14-7 at different stages in the first-to-15 format, but Coonan showed incredible resilience to battle back, taking the first game 15-14 before going on to finish the job in the second.

Next up was the man everybody wanted to see; Brady, back in domestic singles play for the first time in seven years, took on Clare youngster Fergal Coughlan in the Round 1 match. Coughlan showed no signs of beingoverawed by the five-time world champion and held his own for the majority of the opening game, but Brady eventually moved through the gears to take the game 15-10 before sealing the match in the second set.

Mulkerrins had too much firepower for Moran in their match-up, the Galway man firing some absolute bullets to take the match in two games, while there were also wins for Nash against Gary McConnell and Dominic Lynch against Paul Moran. McCarthy and Seamus Conneely received byes to the quarter-finals.

There were no major surprises in the last eight later in the day as the favourites took care of business; McCarthy saw off O’Connor, Brady had too much for Coonan, Mulkerrins romped home against Connelly and Nash came through a tight opening game to eventually get the better of Lynch.

Sunday morning saw the semi-finals in the men’s open and the eagerly-anticipated match-up of McCarthy and Brady, which plenty were framing as a warm-up for a potential All-Ireland final next weekend. But the expected blockbuster never quite materialised as Brady was forced to pull out through injury after McCarthy had taken the first game, sending the Westmeath man into the final.

In the second semi-final, Mulkerrins came through a terrific match against Nash to progress to the final on a 15-12, 15-13 scoreline.

The Open final between McCarthy and Mulkerrins was billed as a showdown between arguably the two best players in the game at the moment but the expected fireworks never quite materialised; McCarthy dominated from the outset, controlling the centre of the court and forcing Mulkerrins into a number of uncharacteristic mistakes.

McCarthy took the first game 15-8 and continued to have the better of the exchanges in the second, going on to win that game, again by 15 points to 8, to claim a record fourth Irish National 4-Wall title and confirm his status as favourite for the upcoming All-Ireland championships.

The Ladies Open took place between Ballaghaderreen and Aughagower on Saturday and Sunday, with the early rounds being played in Ballagh’ — the home club of the newly-appointed president of the Handball Association, Dessie Keegan — before the semi-final and finals were staged in Aughagower on Sunday.

The vastly experienced Aisling Reilly from Antrim saw off the challenge of Kildare teenager Mollie Dagg in their semi-final to set up a final against Martina McMahon from Limerick. McMahon and Reilly are the current World Doubles champions and were facing off against one another for the title. McMahon proved to have the upper hand on this occasion to take the crown in two games, 15-9, 15-11.

‘A lonely place to be’

Liam Masterson, the secretary of Aughagower Handball Club, was flat out working on Saturday afternoon. One minute he was refereeing a match and the next he was carrying pots of soup up into the kitchen at the back of the alley. When he found a spare moment, he reflected on what hosting an event like the 4-Wall Nationals meant to a club like Aughagower.

“It’s a good tight unit here,” said Liam. “Really if the facilities are up to scratch, that’s the main thing. We’re delighted that we were chosen to host the top players in the country.

“It gives us some profile and some exposure. We’re a small club. We have fewer than 20 adult members and 40 juveniles, give or take. So it’s a big thing for us to be hosting this.”

Accommodating big national competitions is nothing new to the club; for the past six Januarys, they have been a host venue for the She’s Ace tournament, one of the main ladies-only events in the handball calendar. But having players of the calibre of Brady and Mulkerrins competing at the club is a timely and very welcome boost for Aughagower, which is facing the same challenges as every rural club in keeping hold of its playing members.

“With it being a minority sport, trying to keep the underage players at it is the struggle,” offers Liam. “We’ll have plenty from National School level up to age 12 or 13 but once they get up to 15 and 16, that’s when football or soccer or hurling or whatever team sport comes into it more.

“It’s an individual sport, handball, and it’s a lonely place to be if you’re not going well. It can be disheartening.”

But they’re making it work as best they can. The alley is looking terrific for the weekend and the damp conditions outside are being kept at bay by the recently-installed state-of-the-art heat recovery system.

“There’s an awful lot of work gone into this place,” continues Liam.

“The two Heraty brothers, Michael and Gus, were the driving force in the very beginning and they brought us to where we are really.”

Both Michael and Gus are here on Saturday, two old-school handball aficionados appreciating the play being served up by the best in the business. Michael is now club chairman, and he told the story of how the club in its modern form came to be established 30-odd years ago.

“There was an old alley here, the sort that was in nearly every parish. It was neither a 40×20 nor a 60×30,it was sort of in between, and it had no back wall. We got a grant from Mayo County Council to tidy it up and then lads started playing and it went crazy, we had huge interest in it at the time.”

The new alley was built in 1991 and 1992 and was officially opened in 1994 by Irish handball great Ducksie Walsh. Since then they’ve added to and improved the facilities bit by bit. The GAA invested heavily in facilities when the World Championships were held in Dublin in 2016, and once they were over, Aughagower got hold of a perspex back wall that was going spare for the price of €10,000, all fundraised and paid for in full by the club.

“It’s recognised as one of the best courts in Connacht now. We had events like the She’s Ace here last month and the place was rocking,” added Michael.

“It can be hard keeping hold of the young players when they go away to college or whatever, but if anyone wants to use it, it’s here.”

Michael still plays his own bit of handball, usually in doubles, and does a lot of coaching work with the club’s younger players.

“I wouldn’t be going diving into the corner or anything!” he laughs. “But it’s a great way to stay fit. And I have two replacement hips!”

Hospital manager: ‘We are preparing for the absolute worst but we hope it won’t come’