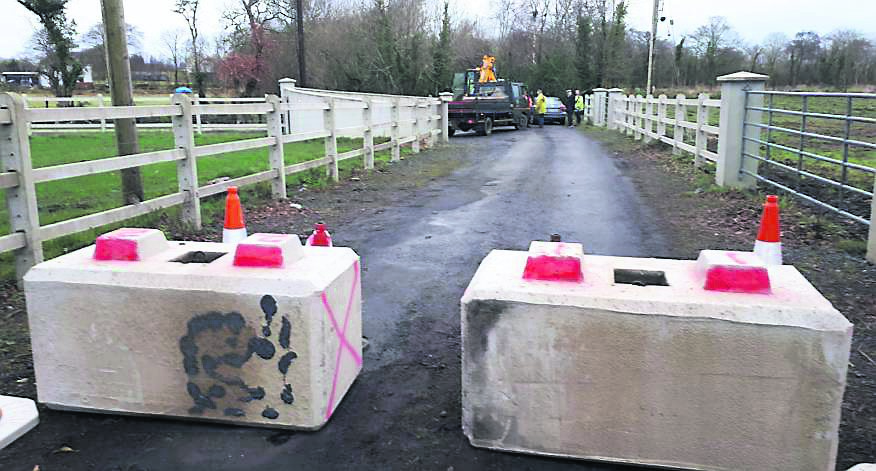 The newly erected bollards sourced by local residents will prevent traffic from Gortnor Abbey using the middle road to exit the school on to the N59.

A Ballina municipal district councillor has defended the actions of Crossmolina residents who have erected concrete bollards to restrict vehicular access to their road.

The two large rectangular bollards were put in place on what is known locally as the Middle Road, leading from Gortnor Abbey secondary school onto the N59 near the local GAA pitch.

The bollards occupy an area in private ownership while the remaining section of road is under the control of Mayo County Council.

The residents’ action has been necessitated by the endurance of 15 years of traffic-related disturbance, it is claimed.

When the Lake Road was temporarily closed to facilitate works some time ago, the Middle Road was opened to traffic exiting the school and has remained open ever since.

Cllr Loftus said the result is that the Middle Road is now used by up to 120 cars twice a day. It was not designed for this purpose and the impacts have taken their toll on both the road and the neighbouring residents who claim they have been subjected to abusive behaviour by some motorists who seem to feel they have a greater right to use the road.

He said those accessing the school from the Ballina direction do not seem to want to use the Lake Road as it requires them to drive through Crossmolina on their return.

The councillor says the residents have repeatedly tried to have the matter addressed. Now, at their wits’ end and with the consent of landowners in question, they have imposed their own solution.