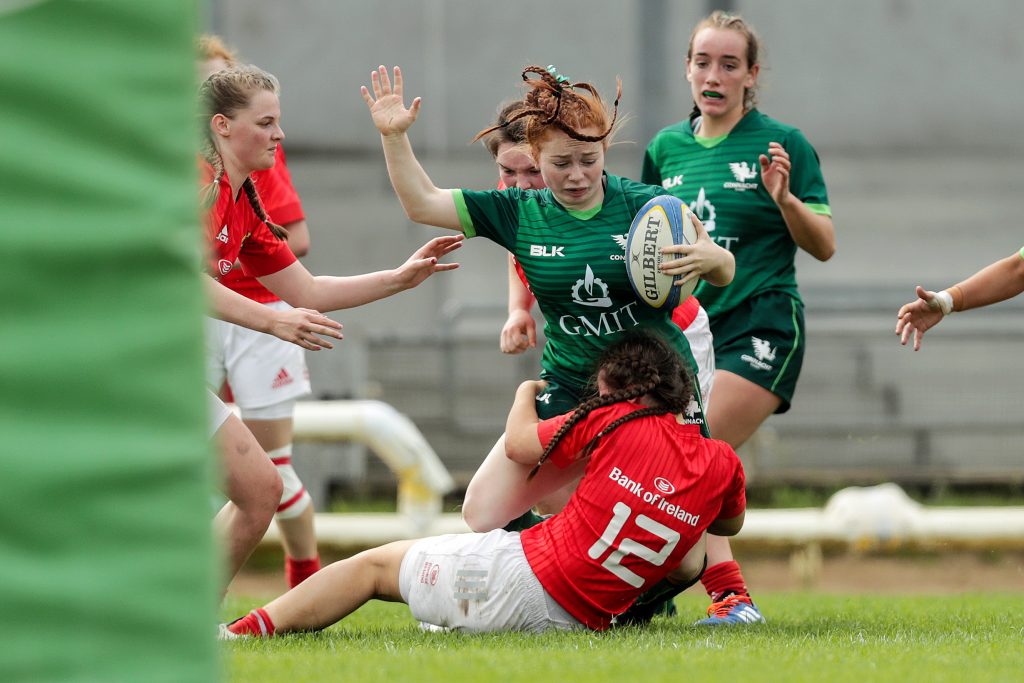 Nina McVann in action for Connacht against Munster in the Under 18 Women’s Interprovincial. She is joined by Ballina teammate Kaitlin Bourke in the Ireland U18 squad for this weekend’s trip to Scotland.

A pair of Ballina players have today been included in Ireland’s Under-18 Women’s XV squad which travels to Scotland for a training camp at the weekend.
Kaitlin Bourke and Nina McVann are two of 24 players who will travel to Inverness for a unique training weekend with the Scottish Under-18 side. This weekend will be a mix of education workshops and training which will culminate with a training game against Scotland U-18 on Sunday.
The players have been selected form a larger group of 36, who have had back to back training weekend at the IRFU High performance centre for the past two weekends.
Kaitlin and Nina are among seven players from Connacht included in the squad, with Hannah Johnston (Sligo), Hannah Coen (Creggs), Megan Walsh (Connemara) and Ivana Kiripati and Faith Oviawe (Buccaneers) all making the plane as well.
“The squad has been selected from clubs from all over the country and the players have previously represented their provinces,” said Anthony Eddy, IRFU Director of Women’s and Sevens Rugby. “It will be an education weekend and will expose them to different style of coaching and finish with a training game against Scotland.”