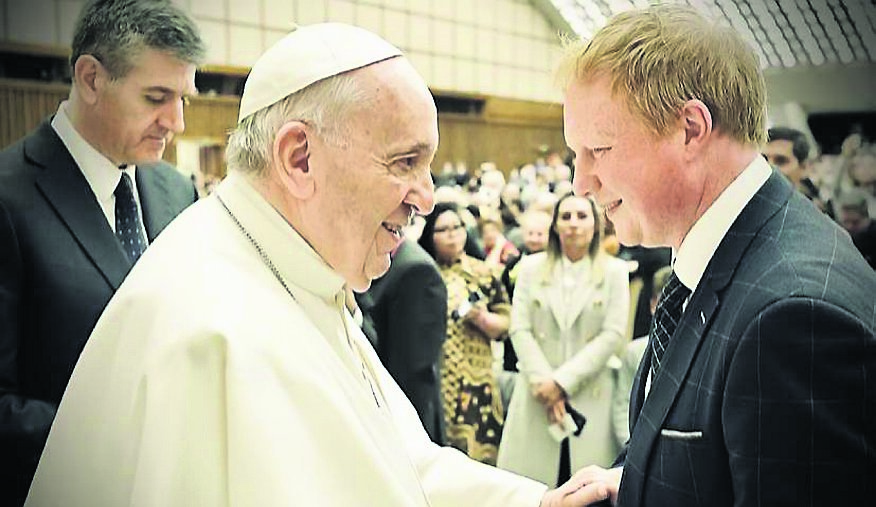 A film about Knock Shrine directed and produced by EWTN Ireland for broadcast worldwide was presented recently to Pope Francis in Rome.

The historic presentation followed a screening of the film Hope in the Vatican’s private Filmoteca Cinema. The screening was attended by Knock parish priest Fr Richard Gibbons and a delegation from the Marian village who were in Rome for the Papal Mass in St Peter’s Basilica.

The docudrama chronicles the 1879 Apparition at Knock, Ireland’s national shrine. The film is the latest major television production by EWTN Ireland, which has its Irish headquarters in Limerick.

The production, which was filmed entirely on location in Ireland, had its first screening in the the Filmoteca Vaticana, in the Vatican on January 27 last. The film was written, produced and directed for the global Catholic network EWTN by Campbell Miller.

“When Mary appeared at Knock in 1879, she brought light and hope to the Irish people, and she did so at a time of great darkness,” explained Aidan Gallagher, CEO of EWTN Ireland.

Campbell Miller told the Western People: “It is an incredible honour for EWTN Ireland to have the opportunity to meet the Holy Father and present him with the film. Having visited Knock during his visit to Ireland, he has a particular affection for our national shrine.”

Hope will be screened on EWTN television in the United States during March and in Ireland in August.