Drama aplenty from Ballina to Ballinrobe and Ardagh to Achill 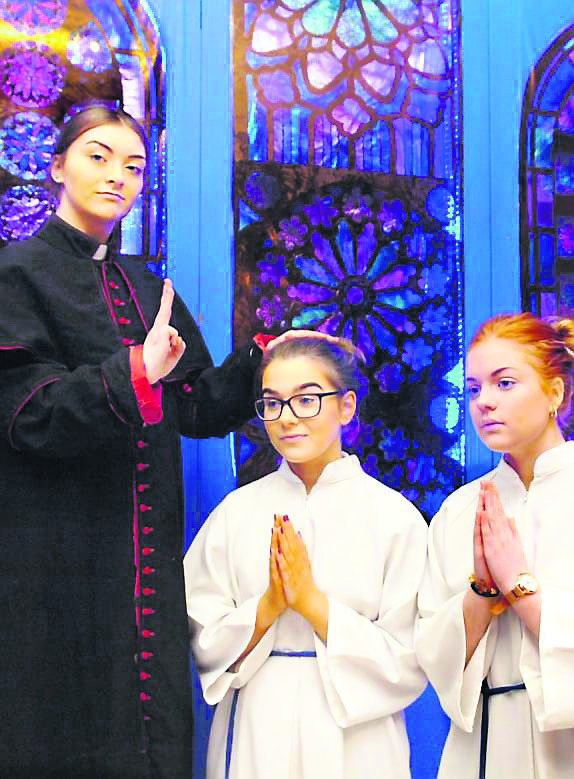 The students of St Mary’s Secondary School in Ballina will pay a sparkling tribute to the universal power of friendship, sisterhood and music when they bring the three-night run of their annual school musical to an end tonight (Friday).

The amateur dramatic scene around Mayo and Sligo is awash with top class productions at the moment, with no shortage of productions to take in this Valentine’s weekend.

The students and staff of St Mary’s have wowed audiences this week with their staging of ‘Sister re-Act’ since Wednesday night. The talented cast and crew have compiled a hugely entertaining show that represents their take on the feel-good, musical comedy smash-hit, Sister Act.

It tells the story of disco diva, Dolores, whose life takes a surprising turn when she witnesses a murder and ends up hiding in a convent under protective custody.

Another local production underway is ‘The Importance of Being Earnest’which got underway at Ballina Arts Centre last night (Thursday) and runs until Sunday, February 16, nightly at 8pm.
2020 marks the 125th anniversary of the debut staging of the Oscar Wilde-penned play which has been dubbed “the most perfect comedy in the English language”.
Ballina’s Riverside Theatre Group are affording local drama lovers the unmissable opportunity to enjoy this endlessly entertaining comedy when it stages a top-notch revival of the play. Wilde is famed for his wit and ‘The Importance of Being Earnest’ doesn’t disappoint, showcasing some of his most dazzling word play and hilariously unlikely scenes.
Tickets cost €12 or €10 and can be booked by calling 096-73593 or online via www.ballinaartscentre.com. 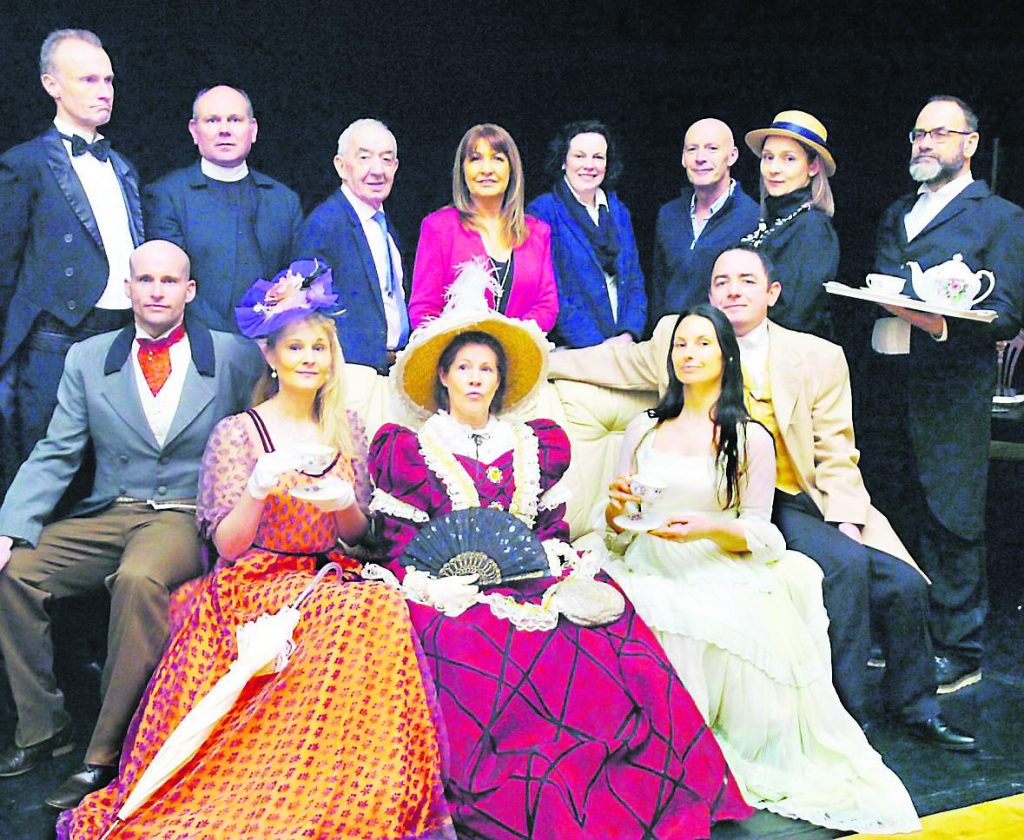 Meanwhile, just a stone’s throw from Ballina, the Ardagh Community Players stage ‘The Farm Boy’ by Achill playwright Ann Lavelle in Ardagh Community Centre for a three-night run which gets underway tonight and continues until Sunday, February 16.
Set in rural surroundings in an Ireland of the 1960s, the plot revolves around the O’Brien household and the effects of Martin’s overpowering influence on all those whom he surrounds. Not an easy man to live with, he is more tolerated by his family and neighbours than accepted.

The show commences at 8pm nightly. No booking is and doors open at 7.30pm.

There will also be smiles all around in the South Sligo community of Cloonacool regardless of whether Valentine’s Day delivers or not as the renowned Cloonacool Players return to the stage with a production of the hilarious Sam Cree comedy, ‘Don’t Tell the Wife’.
The play will be staged in Cloonacool Community Centre nightly at 8pm, commencing on St Valentine’s Night and concluding on Sunday, February 16.
Set in Belfast in the 1960s, this is a must-see show that guarantees a night of side-splitting howls of laughter and will send everyone home with a happy smile on their face. It tells the story of Edna Willis (Geraldine Lundy) who suspects that her plumber husband, Bobby (Peadar Conway), is chasing another woman – a Catholic.

Elsewhere, Achill Musical and Dramatic Society (AMDS) presents the perfect antidote to what has been a long month of election discourse and political debates when it stages the hilarious ‘9 to 5 The Musical’ in the island’s Coláiste Acla at Dooega.

The opening performance will take place on Valentine’s night, Friday, February 14 at 8pm – making the ideal romantic outing with your other half – and will be followed by two further shows; a matinee on Saturday, February 15 at 2.30pm and the closing show later on Saturday evening at 8pm.
Based on the seminal 1980 hit movie of the same name, tickets for ‘9 to 5: The Musical’ are on sale in Achill Sound Post Office and online from www.eventbrite.ie and are priced at €20 for the evening shows.
For further ticket information call 086-2030627 or 086-4059460. 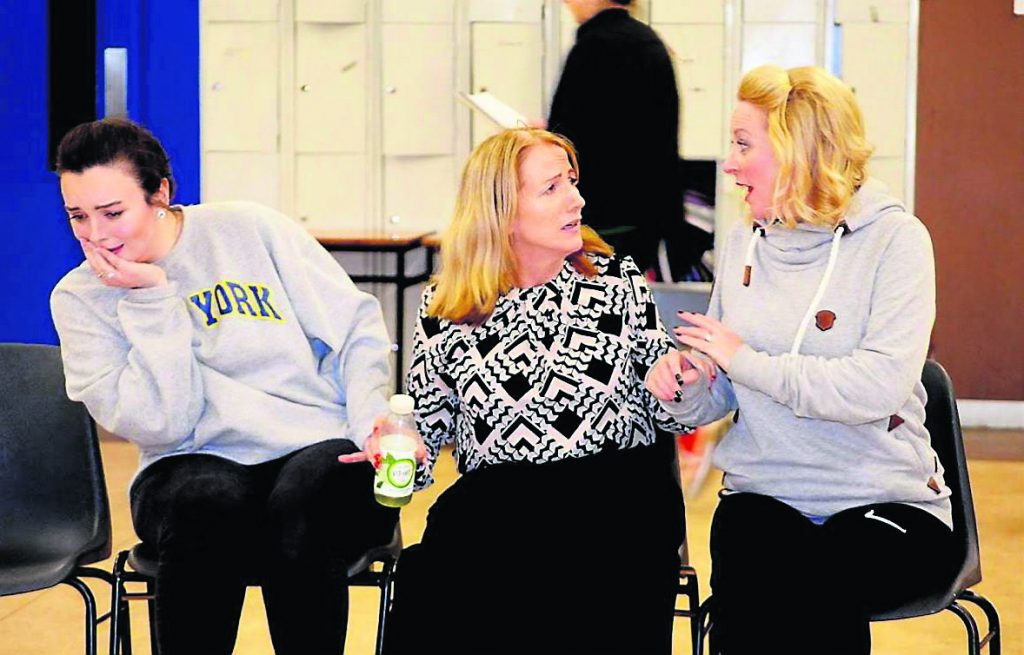 Pictured from left are Caragh McGinty (Judy), Siobhan Campbell (Violet) and Kate Callaghan (Doralee) during rehearsals for Achill Musical and Dramatic Society’s production of ‘9 to 5: The Musical’.

Finally, Ballinrobe Musical Society is making preparations for its 50th show and it is one that will see the society, first formed in 1944, returning to its roots.
The talented group will stage a week-long run of ‘The Pirates of Penzance’ at Ballinrobe Community School beginning this Sunday, February 16.
The show has a special place in the hearts of both the society and the local community, according to the society chairman Des Treacy.
“When the society first formed in the 1940s, Pirates was the very first show we ever did. When we reformed in 1974, this is the show we did and we also did it in 1985. At the first-ever show at the present venue of Ballinrobe Community School in 1998, we did it then as well,” explained Mr Treacy.

Show dates are from February 16 to 22 next, running nightly at 8pm with a matinee on Sunday, February 16, at 3pm. More information on tickets is available on the Ballinrobe Musical Society website.