Excitement grows in Ballina as Other Voices draws near 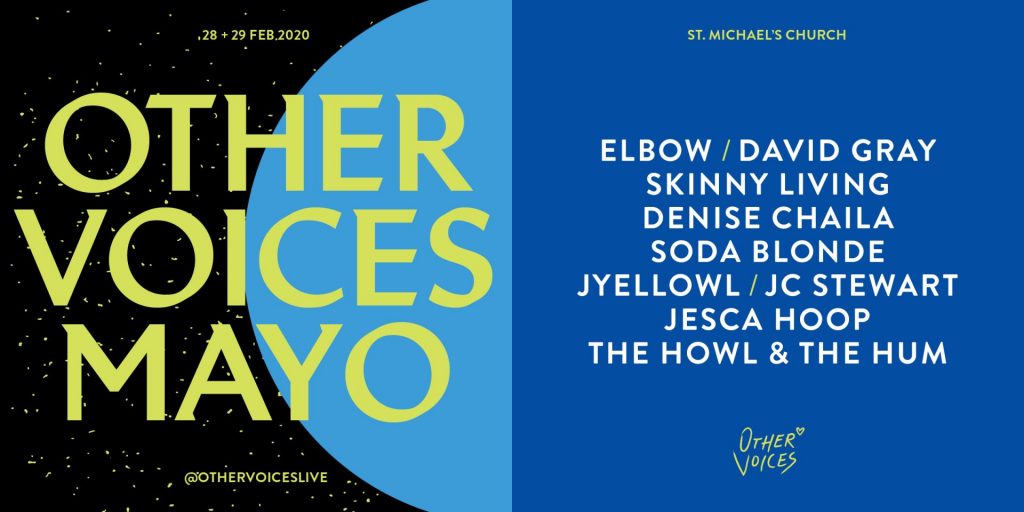 The countdown to the second instalment of Other Voices Ballina is well and truly on with less than three weeks to go until the renowned music festival rocks up in Mayo on Friday and Saturday, February 28-29.

All those planning to attend Other Voices Ballina are advised to register for free in advance and exchange tickets for Festival wristbands at the Other Voices Ballina Hub. All festival-goers who collect wristbands from The Hub will have the opportunity to win a multitude of great prizes including the elusive tickets to St Michael’s Church.vRegistration for the Festival is now open at Eventbrite.

A whopping 18 new acts have been added to the Other Voices Music Trail bill, giving Mayo bound festival-goers a wealth of talent from a diverse range of genres. Entry to all Music Trail events is on a first-come, first-served basis.

The series of free gigs take place in a cluster of venues spread across Ballina on both days of the festival and featured among a dynamic line-up is drummer/producer/rapper and winner of the Other Voices IMRO Open Call 2019, Alex Gough, and Galway songwriter Maija Sofia who will play a collection of songs from her RTE Choice Prize nominated, debut album ‘Bath Time’, exploring the female experience throughout art, history and folklore.

Folk fans are in for a treat with traditional folk singer and multi-instrumentalist John Francis Flynn followed by Armagh singer Dani who takes inspiration from Irish traditional melodies and last but not least, growing up on Achill Island, Graham Sweeney who blends Irish folk with irresistible rhythms with his latest track The Quiet Man selected as Tune of the Week on RTE Culture.

RTE 2FM will broadcast from the festival with Tracy Clifford going live from Bar Square on Friday, February 28 between 12pm and 3pm, featuring band sessions and interviews. Later that night 2FM Rising bring their stage to Bar Square, with performances by Alex Gough, Nealo, and Kynsey.

In partnership with Virgin Media, Other Voices will live stream all the action from St Michael’s Church to the Music Trail venues throughout the town. Music fans can sit back and enjoy all the performances from a cosy spot in the pub in front of huge screens with high definition audio-visual. Venues include The Loft, T Breathnach’s, An Sean Sibin, An Bolg Bui, Harrisons, Paddy Macs, Bar Square, An Tarbh 47, The Cot and Cobble, Vincy’s Bar, Ballina Arts Centre and Shambles Bar at Ballina Manor Hotel.