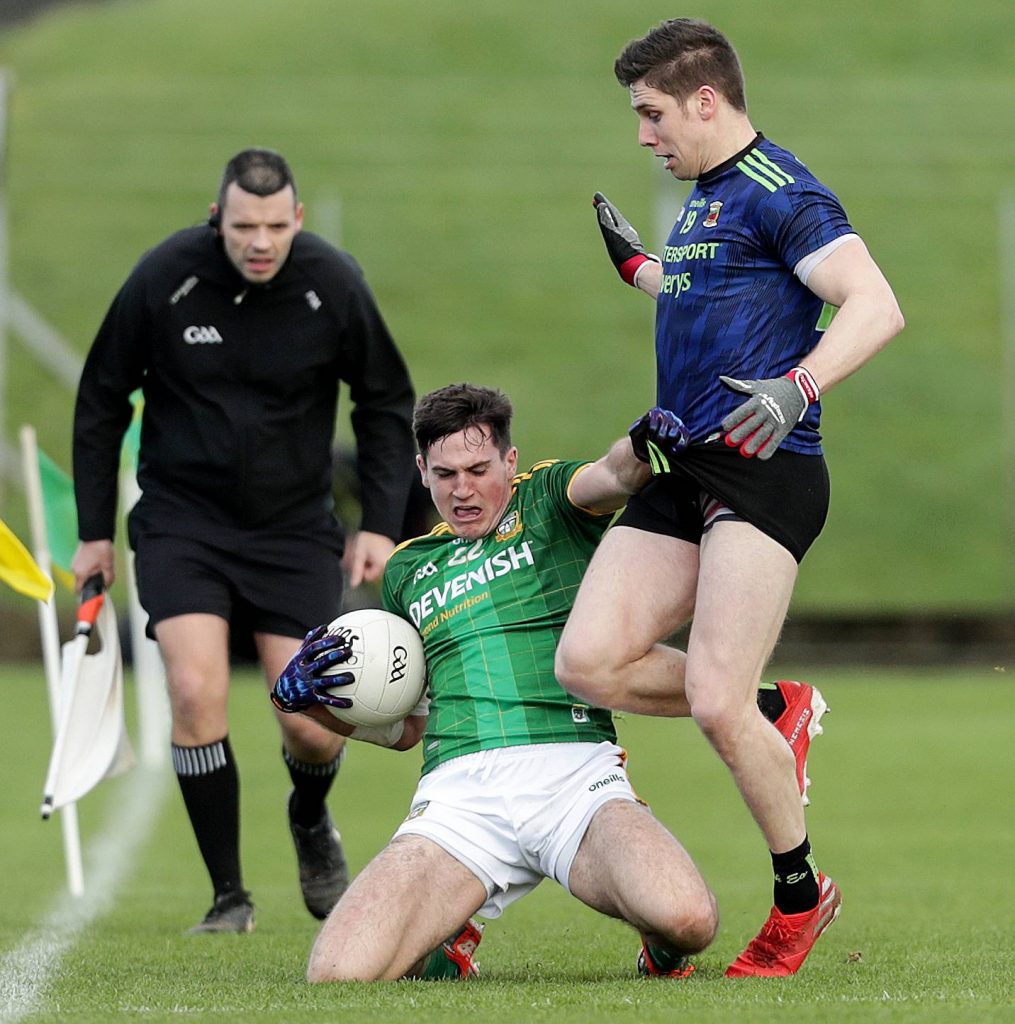 For all the buzz around Mayo’s new faces, it was the experienced heads of Aidan O’Shea, Paddy Durcan and, in particular, Kevin McLoughlin who pulled and dragged their side to a sorely-needed first victory of the league season in Navan last Sunday. The outside world may have been swirling with the news of waves of change at the ballot box but in Pairc Tailteann, the traditionally dominant parties remained just that: dominant.

Eoghan McLaughlin’s second-half introduction brought to eight the number of senior debuts handed out by James Horan in the span of Mayo’s three league games so far. That figure isn’t notably higher than most of Mayo’s Division 1 peers and nor has it been reached without a sound logic behind it. A good number of Mayo’s front-liners, like Cillian O’Connor, Donal Vaughan, Chris Barrett and Seamus O’Shea, are still working their way back to full-fitness and others, like Colm Boyle, Tom Parsons and Keith Higgins, have suffered injury set-backs of varying severity in the early rounds of the league.

So there is a need for new blood to be brought into the team. The question for James Horan and his selectors to mull over as they head into the first mini-break of the campaign next weekend is whether those new faces have yet showed enough to suggest they will be live contenders for starting places later in the year.

It’s a mixed bag. Two of the new men to show the most promise in the opening two rounds, Oisin Mullin and Padraig O’Hora, didn’t feature in Navan, Mullin because of his involvement with the under-20s the day before and O’Hora with a slight injury. Both will presumably be back for the trip to Iniskeen to take on Monaghan on Sunday week.

James McCormack was given his first run of the year at full-back in place of Mullin and the Claremorris man performed the role well, holding Thomas O’Reilly scoreless from open play. Eoin O’Donoghue isn’t quite new, having been involved with the panel for the last couple of years, but he too played his first game of the campaign in Navan and was another strong performer.

In the forward line, James Carr and Tommy Conroy were both taken off at half-time. There were some suggestions that Carr, who scored two points in the opening half, was still feeling the effects of the ankle knock he picked up against Donegal in Round 1 but Horan, speaking after the game, said that the switch had been more of a tactical nature, explaining his desire to bring Kevin McLoughlin on for his ability to carry the ball into the wind.

That decision reaped huge dividends, with McLoughlin accounting for all of Mayo’s second-half scores, but it is still worth noting that Carr has now started all three of Mayo’s league games and scored in each first half, but has been replaced at half-time in all three.

Conroy, who had kicked a fine point early in the first half, was also withdrawn at the break for Conor Loftus, making his first appearance of the campaign. Loftus missed a very kickable free into the wind at the start of the second half and it seemed to knock his confidence. He struggled to make much of an impact over the last half-hour.

The same could be said for James Durcan, who worked hard throughout but didn’t exert much real influence on proceedings. Ryan O’Donoghue had a shaky first-half when it again looked like centre half-forward isn’t his natural home, but he improved significantly after being pushed closer to goal in the second half. He had some nice moments of inter-play with McLoughlin, providing the assist for both his equalising point and the game-winning goal.

And it was to McLoughlin, and O’Shea, and Paddy Durcan and Lee Keegan and Robbie Hennelly that Mayo really turned in those final fifteen or so minutes, after Meath’s two quickfire goals had raised the grim prospect of a second straight league loss. O’Shea and Keegan both played 70 minutes for the first time all year, and though neither are sailing at close to full mast just yet, their leadership was crucial as Mayo navigated their way to the win.

McLoughlin took his goal with the composure and calmness of a man who has seen it all before; after isolating Robin Clarke and forcing the turnover, he peeled away from the Meath cover to take the pass from O’Donoghue, ride Clarke’s attempt at a tackle and take his time to place the ball in the net past the onrushing Marcus Brennan.

The goal sealed a win that had seemed to be slipping through Mayo’s fingers and one that is vitally important in the overall league standings. A loss here would have been a body-blow to Mayo’s hopes of staying in Division 1. With trips to in-form Monaghan and Galway to come, along with the visits of Kerry and Tyrone to Castlebar, Mayo could have struggled to find the points they needed to survive.

Instead, they are safely ensconced in what is a remarkably tight Division 1 pack heading into the first weekend off. Just a single point separates first and seventh in the table, with Dublin, Tyrone and Galway on four points and Donegal, Monaghan , Kerry and Mayo all on three. Meath, after this gutting third loss from three, are still without a point at the foot of the table and are probably heading back to Division 2.

The win takes the pressure off Mayo to a certain extent ahead of the trip to Monaghan on February 23. Horan suggested after the match that some of those more seasoned players would be back in contention by then, making it all the more incumbent upon those new faces to step further up to the plate before their chances run out.

See this week’s print edition of the Western People for full coverage of Mayo’s opening win of the NFL Division 1 campaign including report, interviews and analysis.