Day of drama ends with mixed emotions for Mayo candidates 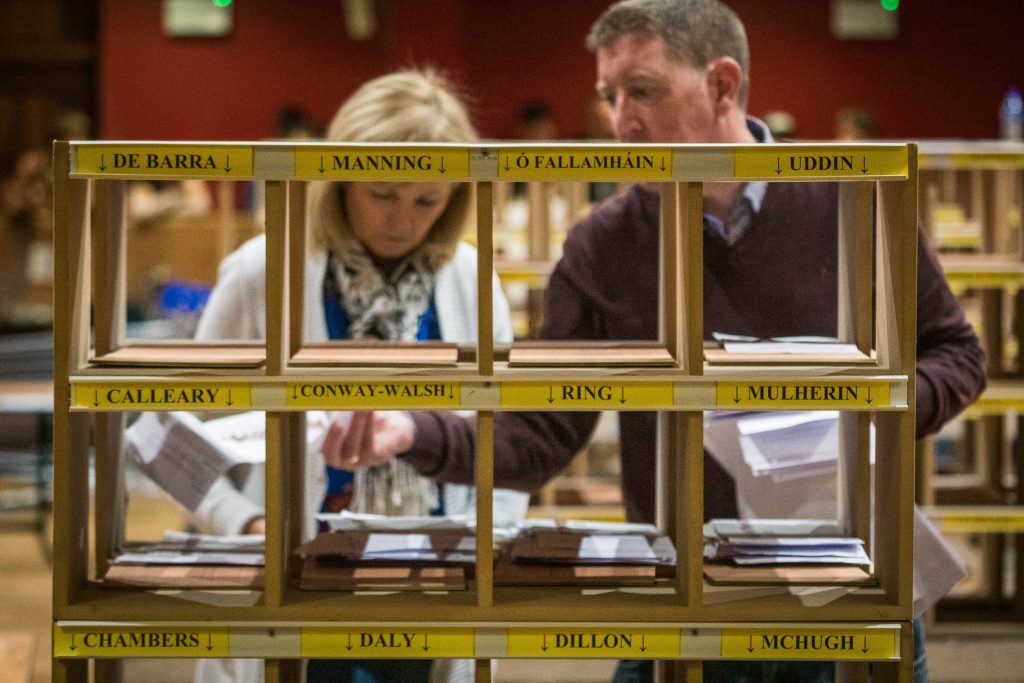 Votes being sorted at the count centre in the TF Royal Hotel in Castlebar. Picture: Keith Heneghan

Fine Gael and Fianna Fáil brows were furrowed from the off as early tallies revealed Rose Conway-Walsh’s sensational showing and how much of a dogfight was to await Fianna Fáil’s Lisa Chambers and the Fine Gael duo of Alan Dillon and Michelle Mulherin.

The Chambers camp were particularly downcast early on Sunday morning as the Castlebar boxes were the first opened and showed the party’s Brexit spokesperson was polling poorly in her hometown.

The mood lightened a little when Chambers’ vote exceeded expectations in areas like Claremorris while Fine Gael followers got a little hotter under the collar.

But even the most astute political observers were struggling to call the fourth seat.

Following the election of Ring and Conway-Walsh, it appeared that voting would end around midnight and pick up again in the morning but as Fintan Murphy and his team blitzed through the process, a final result in the early hours was looming.

With Dara Calleary always taking the third seat, transfers swung and tilted the balance between the Dillon, Chambers and Mulherin.

A surge of transfers to Dillon via Saoirse McHugh boosted his numbers and eliminated his party colleague cleaning the way for the Mayo footballer who by 2.20am was being held aloft by his jubilant supporters.

It was a crushing disappointment for Lisa Chambers and Michelle Mulherin. Both women entered the count centre late into the night and held themselves with admirable grace and resolve in the face of election defeat.

More joyous was the mood of the Sinn Féin support earlier that evening.

They were buoyed and bouncing by their party’s showing in Mayo and nationally and the air crackled as they eagerly and anxiously awaited Rose Conway Walsh’s triumphant appearance in the count centre.

Clearly delighted – and surrounded by friends, family and supporters – the new Erris TD glowed as she basked in her election success.

A tricolour was unfurled and a Sinn Féin flag brandished as she was greeted by party members celebrating a momentous occasion for the organisation in Mayo.

Michael Ring was always going to be home and hosed in this election, but a failure to top the polls would have stuck in the craw. The Westport TD surpassed Rose Conway-Walsh in the standings and finished at the head of the pack.

Hoisted skyward by his followers, Ring spent ‘more time up on shoulders than he did on the ground’, one person quipped. With his right-hand man Gerry Coyle leading the charge, choruses of ‘Olé, Olé, Olé, rang out as the veteran TD’s posse celebrated their win. Ring was the first Fine Gael candidate in the country to make it over the line on Sunday.

More downbeat was the Green Party’s Saoirse McHugh. The straight-shooting Achill woman couldn’t mask her disappointment after 4,177 first preference votes left her trailing in seventh spot after the first count.

Aontú’s Paul Lawless may not have secured a seat but he was enthused by a performance that left his local election failure in the shade. He was clearly buzzing about his personal showing and expect to see the Knock teacher feature in future Mayo elections. The conscientious candidate didn’t appear in the count centre until after 6pm as had spent most of the day taking down his election posters.

The tallyman tradition was jazzed up by live online updates and big screens but the incredible accuracy of their figures remained the same during a day of high drama.

The youth vote was seen as key to the outcome of this year’s elections and a number of parents trailed through the count centre with rubbernecking children during the course of the opening day of counting. The tension/monotony was too much for one pair of kids who took shelter under a table with a computer game in their mitts as the political machinations went on around them.

See this week’s print edition of the Western People for unrivalled coverage and analysis of the General Election results from the Mayo, Sligo/Leitrim and Roscommon/Galway constituencies.