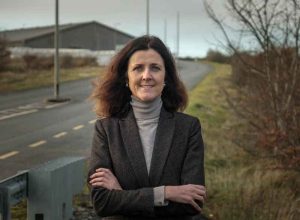 Fine Gael candidate Michelle Mulherin has been eliminated at the sixth count at the 2020 General Election, following the distribution of Saoirse McHugh’s votes. It is the second election in a row that she has failed to regain the seat she first won in 2011 and lost in 2016. She had been out in front of party colleague Alan Dillon for most of the day but a late surge for the former Mayo footballer has seen him leapfrog Mulherin and set him up for a showdown for the final seat with Fianna Fail’s Lisa Chambers. Counting has continued into the night here in Castlebar, prompting returning officer Fintan Murphy to greet the crowd with an apt, “Good morning,” before delivering the results of the sixth count.