The Sinn Fein tsunami has made landfall in the Sligo-Leitrim constituency where Martin Kenny has been declared elected on the first count, having attained almost 3000 votes in excess of the quota. 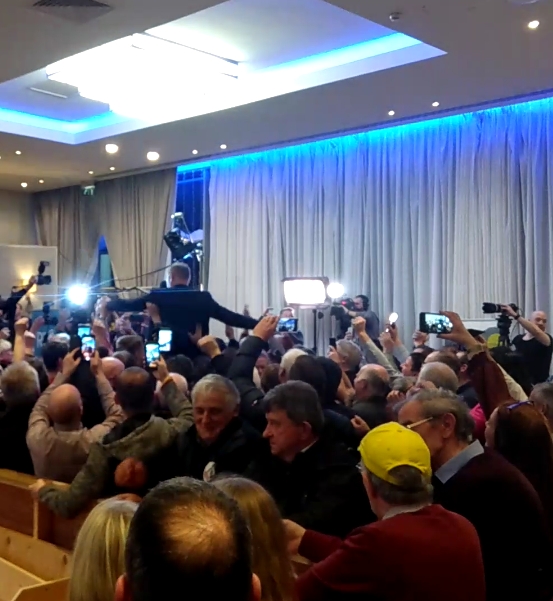 SF’s Martin Kenny is held aloft by supporters as they celebrate his election in the Sligo-Leitrim count centre.

The Co Leitrim-based incumbent TD was the party’s only candidate locally following the recent surprise announcement by Sligo-based SF Cllr Chris MacManus that he was withdrawing his candidacy in deference to the party’s preference for a one-candidate strategy in the Sligo- Leitrim constituency.

Mr Kenny admits it was a gamble and says that while the extent of the electorate’s desire for change was apparent thereafter he never imagined that that would translate into him topping the poll with 15,035 first preferences and a surplus of 2,898 votes.

Cllr Mac Manus has already indicated that he will contest a general election for the party again and says the prospects for that augur well, particularly given the strong support from the youth of the country last Saturday.

“It augurs well for the future but the important thing is we have to maintain that element of trust between us and the young generation. We want to represent every one of all ages but young people have seen that we are the ones that can break that two-party system that is there.”

If Sinn Fein can maintain its support, Cllr MacManus believes it will be well-placed to return the first and second candidates in the four seater constituency  on 8000+ votes each when the country next goes to the polls.

“I am 30 years involved in electoral politics in this State and I have never been more confident about the future of Irish Republicanism as I am right now,” he remarked.

Mr Kenny was less inclined to speculate about an imminent return to the polls:

“I personally think that all of the 160 TDs elected have a responsibility to have a Government. The people have spoken, have elected us and given us the platform. The parties that have been elected represent the type of policies the public wants.

It’s a responsibility not only on Sinn Fein to deliver those but on the other parties who must look at our policies and recognise that this is what the people have stated they want.”