Experience could be the key for Mayo’s young guns 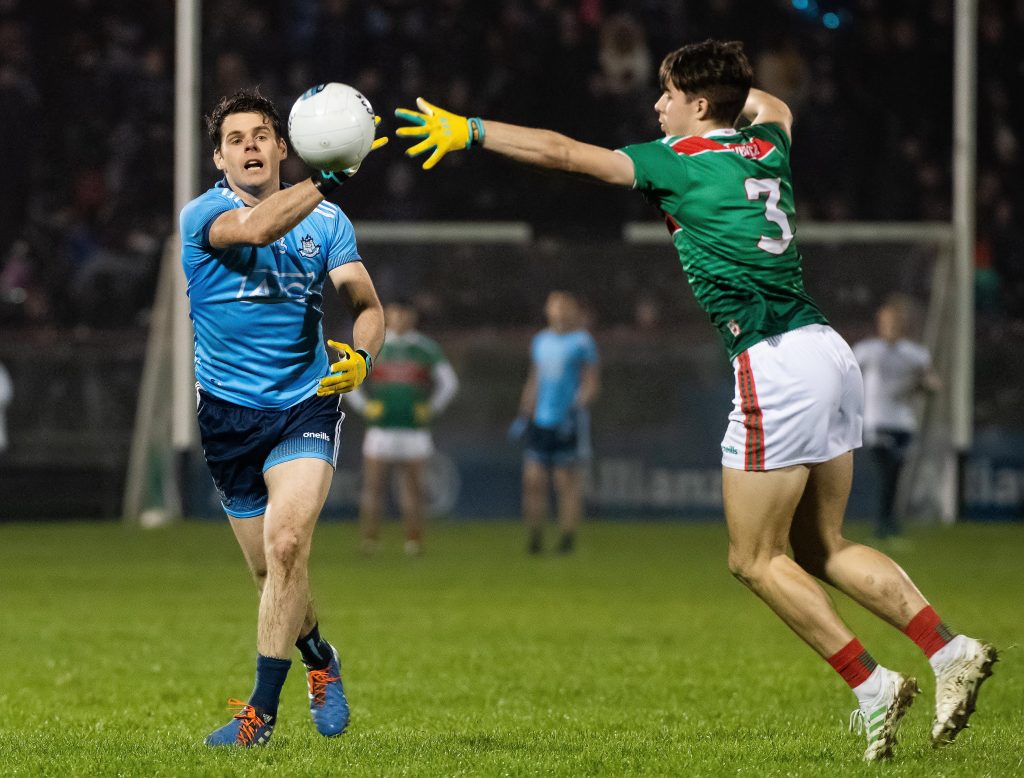 Oisin Mullin in action against Dublin’s Kevin McManamon in last weekend’s Allianz Football League Division 1 tie at MacHale Park. The Kilmaine maestro will swap life with the Mayo senior squad for a crack at Galway in this weekend’s Connacht U20 Football Championship. Picture: INPHO/Evan Logan

The country will go to the polls this Saturday in one of the most keenly-contested general elections of recent times, but come 2 o’clock in MacHale Park, the only decision of any real import to be made is which of Connacht’s twin powerhouses, Mayo or Galway, will remain in contention in the Connacht under-20 championship.

The sides meet in Castlebar in an old-fashioned straight knock-out encounter, with the winners progressing to take on Leitrim in the semi-final and the losers finished with under-20 football for the season barely six weeks into the year. The GAA’s decision to move its under-20 competitions back from their previous slot in the high summer to February/March has met with plenty of criticism, with some commentators arguing that it has considerably devalued the grade, but those concerns will have to be put in the rear-view mirror ahead of what has the makings of a fiery encounter.

Mayo’s pre-season has gone well; they won the Leo Murphy Cup with a thumping victory over Louth. Prior to that they drew with Roscommon in Castlerea, beat Derry in Bekan and then drew with Donegal in Bekan to qualify for the final on scoring difference ahead of the Tir Conaill men.

The final win over Louth was extremely comfortable, with Paul Towey and Frank Irwin grabbing 0-7 and 1-4 respectively in a facile 2-18 to 0-8 win for Michael Solan’s men. Solan, now in his fifth season as Mayo’s under-21/under-20 manager, insisted after that game that places were still up for grabs ahead of the championship campaign but over the course of those four January weekends, the rough outline of a starting team seems to have emerged.

Jamie McNicholas of Kiltimagh is nailed-on in goals, having started each one of the Murphy Cup matches in what is his second season in the under-20 set-up. The defence will likely include Jack Coyne from Ballyhaunis, David McBrien of Ballaghaderreen, Aaron McDonell of Ballinrobe, Westport’s Rory Brickenden (all of whom also played last year), and Enda Hession from Garrymore, with Luke Tunney from Westport, Mayo Gaels’s Ruairi Keane (a standout player on last year’s minor team), and Davitts’ Dmitri Trench also battling for a place.

It’s a similar picture in the forwards. Charlestown clubman Towey has probably been the pick of Mayo’s attackers in pre-season and he will lead the line, with Ballina man Irwin (another of last year’s minor graduates) and Kuba Callaghan, who was, like McBrien, part of the Ballagh’ team that reached the county final last year and has successfully shaken off a hamstring problem he picked up against Roscommon, likely to join him on the inside line.

The half-forward line could take any number of shapes. Any one of Mark Moran and Pat Lambert (both Westport), Ronan Reilly and Aaron McHale (both Parke), Kiltane’s Mikie Conroy, Knockmore’s Connell Dempsey, James Jennings of Mayo Gaels, Jack Mahon from Charlestown, Fergal Sweeney from The Neale, or Liam Burke from Ballinrobe, in addition to those midfielders named above, could feasibly earn a starting berth.

The wildcard in all this is Oisin Mullin, who is still eligible for the under-20 grade. He has already played two years with the team (he’s the lone survivor from the team that reached the All-Ireland final in 2018) but he has yet to play a single minute with the under-20s this year on account of Kilmaine’s involvement in the All-Ireland club championship and, in more recent weeks, his involvement in the Mayo senior panel.

Mullin has impressed in both of his runs with the seniors so far and drew particular praise for his excellent performance at full-back in the defeat to Dublin last Saturday night, and Solan will surely gamble on throwing him straight into his team, either in midfield or in the half-back line.

Galway won the Connacht final between the sides in Tuam last year on the relatively comfortable scoreline of 0-16 to 0-10 on their way to the All-Ireland final. Since then, Padraic Joyce has been promoted to senior manager and his place with the under-20s taken by Donal O Fathartha. Their pre-season has been rockier than Mayo’s; they lost to Cork and Kerry in the John Kerins Cup before losing to Kerry for a second time in what amounted to a challenge game in Tralee.

Of the teams that contested that final last year, Mayo should have as many as 11 survivors on Saturday: McNicholas, McBrien, Coyne, McDonnell, Brickenden, Gallagher, Towey, Goldrick, Callaghan, Gavin, and Mullin. That’s a serious amount of championship experience at this age grade.

Galway, in contrast, have only four players who played in last year’s team available to them in Jack Glynn, Eoin Mannion, Jack Kirrane, and Brian Harlowe. It will be worth keeping an eye on Tomo Culhane should he play in the forward line though; the Salthill/Knocknacarra man was one of the best under-17s in Ireland last year.

The winner will go on to play Leitrim in Carrick in semi-final on Saturday, February 15. The other semi-final is between Sligo and Roscommon on the same day in Markievicz Park and the final is set for February 22.