West’s voters get ready to go to the polls 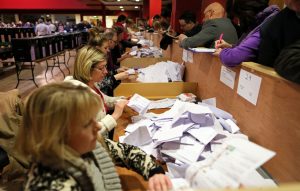 Counting in Castlebar during the 2016 General Election. This week’s will be the first Saturday election in Ireland since 1918. Polls will be open from 7am to 10pm. Picture: Getty Images

More than 95,000 people in Mayo may be eligible to vote in Saturday’s general election.

The exact electorate figure will not be finalised until later this week but as of February 15 last year there were 92,526 people eligible to vote.

That figure has now swelled with Ballinrobe, Roundfort and Garrymore welcomed back into the constituency. Their re-introduction takes the electorate up 95,657. However, that figure is likely to change slightly when final calculations are completed.

Following the recommendation of the constituency commission report in 2017, the area around Ballinrobe town, Roundfort and Garrymore returned to the Mayo constituency, having been positioned in the Galway West constituency for the 2016 general election. However, a large area south of South Mayo including The Neale, Kilmaine, Shrule, Cross, Glencorrib and Kilroe remains in Galway West for 2020.

Fianna Fáil councillor Damien Ryan has had a busier canvass than many — jumping between boundaries and borders on behalf of outgoing TDs Lisa Chambers and Éamon Ó Cuív.

“From my own political side it isn’t a huge deal because Éamon Ó Cuív is only five miles from the county boundary anyway and he’d be in Ballinrobe town as often as myself. But I can understand the sense of disconnect for some people,” said Cllr Ryan.

He said there has been a bit more of a bounce in the step of some voters who find themselves back in the Mayo fold “because they can identify with the Mayo TDs”.

This will be the first Saturday election since 1918, one of the key elections in Irish history. Polls will be open from 7am to 10pm.

Taoiseach Leo Varadkar said he decided on a Saturday polling day to alleviate the pressure on parents seeking to vote and to allow people who live away from their constituencies return home to cast their ballot.

The Mayo count gets underway on Sunday in the TF Royal Theatre in Castlebar. While the day of the week might be different, not much else will change for returning officer Fintan Murphy and his team.

“It won’t make any real difference to us as the process is the same as set out in statute,” Mr Murphy told the Western People.

The action will get under way at 9am with the verification of boxes and Mr Murphy expects the first count to get under way in earnest after lunch.

He said that in 2016 the first count was completed just after 8.30pm and the returning officer said that offers “a fair indication” of how matters are likely to proceed on Sunday.

A potential fly in the ointment may be Midwest Radio’s Night with the Stars concert that is taking place on Monday night next. Should the count run into Monday (as expected) and clash with the concert, the count will be transferred from the theatre to the adjacent Ruby Room.

“We won’t be leaving the hall until well into the afternoon on Monday unless it is necessary to leave,” said Mr Murphy.

See this week’s Western People for full analysis of the Mayo, Sligo-Leitrim and Galway constituencies.