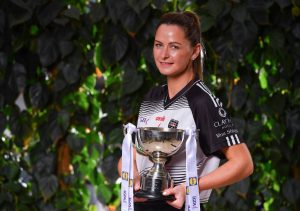 She may have been a latecomer to inter-county football, but new Sligo captain Nicola Brennan has taken the job with the sole focus of leading her side into Division 2 of the Lidl National Football League.

Ten years on from making her league debut as a 17-year-old, Brennan made it back to the county team for her second game in 2017, and this time she wasn’t inclined to let the chance slip.

By her own admission, she was not ready for the dedication required for the inter-county game at that tender age, but after a year of upheaval in the Yeats County she is honoured to be asked to lead the team this year. That job began with Sunday’s Lidl Division 3 Round 1 Connacht derby with Roscommon in Boyle, which the Rossies won on a scoreline of 3-12 to 2-8.

Leitrim native Michael Bohan has been handed the manager’s job in Sligo, and after the team parted ways with joint managers John O’Hara and David Curran in the middle of their championship campaign last year and ended with stalwart Ted Maloney in charge, it’s time for a settled face in the position.

Considering that Sligo reached the Lidl NFL Division 3 Final and the TG4 All-Ireland Intermediate semi-final last year, where they were beaten by Meath and Tipperary respectively, Brennan is justified when she says there is plenty of talent in the squad.

“You couldn’t but look back on last year with a bit of pride that we still managed to perform the way we did with all the upheaval,” said the Tourlestrane player.

“On top of that, to see the players that came back this year, it just goes to show the players are only focused on football.

“That was their only concern, doing well at football for Sligo. We all ploughed through as best as we could last year with all that was going on. And we came this year to give it another go.”

Sligo were Lidl Division 3 champions in 2015 and played second-tier football for three years after that before they were relegated back down a division in 2018 after seven straight defeats that season.

Perhaps it was no shock that they pushed hard for an immediate promotion last season, but in just her second season as a regular, Brennan spotted the difference that playing one tier higher can make to your summer.

“That stood to us two years ago. We didn’t do well in Division 2, but having played against those teams, once Championship came we were a lot better.

“It is obviously a big ask, but we know we are capable of playing good football, even as we are with different players coming in.

“We’re definitely aiming for the Division 3 final. We did it last year; we definitely can do it this year.”

Sligo are away to Kildare in Round 2 this Sunday at 2pm.