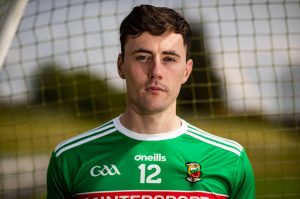 Diarmuid O’Connor said he was ‘disappointed’ with the decision to introduce the advanced mark to the rules of Gaelic football.
Picture: INPHO/Bryan Keane

As winters go, this one has been harsh in the West. Not only have the denizens of Mayo had to suffer the effects of the annual hangover from yet another arid championship, but the growing tragicomedy off the field has continued to stoke the flames of public ridicule.

While Dublin soaked in their momentous fifth All- Ireland title in a row, they could enjoy their celebrations without having to contend with the prying eyes of the Fourth Estate.

They were otherwise engaged at, or should we say outside, boardroom meetings. Mayo, once again, were on the back pages, and for all the wrong reasons. But amid the administrative chaos that came with contrasting stories from opposite sides of the Atlantic, a nugget of positivity emerged: the return of Ciaran McDonald.

Many of the current Mayo squad have grown up in awe of the luscious golden locks, and allied with the fact that he has been involved in commendable work underage in recent years, his call-up to James Horan’s backroom team can only be welcomed. Of course, it’s still early days and his true impact has yet to be gauged but, according to last year’s senior captain, Diarmuid O’Connor, his influence is already being felt on the training pitch.

“He’s a very knowledgeable man and he has great experience,” said O’Connor at the launch of the leagues in Croke Park. “It’s great to have him around. The lads seem to be getting on very well with him so far.

“I’ve only joined back in with them in the last couple of weeks so I’m just beginning to work with them now, but any advice you can get off him is great. He brings great knowledge and experience to the squad so it’s great having him.

“Talking to the rest of the lads they’ve talked about meeting him on the training pitch and him coming over talking to them and giving them advice. I don’t know what his official title is, but I’m looking forward to working with him for the year ahead.”

Of course, the off-field drama has also had an effect, even if the Ballintubber man maintains that players weren’t privy to the gory details of the winter-long saga. But with a new chairman in place, Liam Moffatt, and tensions ostensibly eased between the parties, the senior footballers may begin to feel like they can leave the controversy in the rearview mirror.

“I’d know Liam fairly well. He has some big ideas. Time will tell. I’m sure he’ll do a great job. You never want to see your county in the media for the wrong reasons. It was disappointing to see and hear about it. But I don’t think it was an issue for the players, to be honest.

“Most of us were too busy with the club championship, a lot of lads were away, or having a break or just getting ready for the next year. I don’t even know the ins-and-outs of it myself. Obviously, you’d have people coming up asking about it, but I’d just tell them the truth, that I didn’t know anything about it.”

And so a new chapter, a new act, indeed a new script begins. Last year saw the 24-year-old take on his first campaign as captain, though it was pockmarked by injuries which saw him struggle for a sense of fluidity.

But having moved back home permanently, securing a teaching job at St Gerald’s College in Castlebar, he believes he is better equipped to stay injury-free over the coming months, without taking anything for granted.

“It was a frustrating year for myself with all the injuries so I’m just focusing on getting myself right.

“I’m feeling good now. I had a bit of a break there when the club season finished up there; the management gave me some time off so I’m getting myself right.

“I don’t think I have to alter the way I play, it’s more off-the-pitch stuff and looking after myself, improving in any small area I can. There are plenty of lads that do as much running as I do, if not more, and stay injury-free.

“Obviously, there are some injuries like the fractured wrist and the fractured eye socket last year that couldn’t be prevented. But when you get a little muscle injury you’re always thinking if you could have done more beforehand. It will be something I will be focusing on more this year, looking after myself more off the pitch.”

Moving on towards the county’s opening league fixture against Donegal, monitoring his own physical wellbeing won’t be the only issue preoccupying the mind. Last year’s trial of the advanced mark in the league was deemed a success and it will be introduced for this year’s championship, meaning more counties look set to utilise it.

O’Connor, like most intercounty players, is not one to be loquacious on the topical issues of the day, but he’s also keen to voice his disapproval to the introduction, while also maintaining that players simply must move on.

“I was disappointed to see it come in. I didn’t think there was a need for a change. It’s in now and it is what it is.

“In the league last year I don’t know if there was too much of a change but the fact that it’s in for the championship now there will probably be more emphasis on it.

“In training you see more lads practising frees. Anyone can be a free-taker now if they catch a mark and they can have a free to win a game.

“You see lads practising their free-taking before and after training.

“Only time will tell how much it will change the game. Everyone is different but most of the lads I talk to didn’t see the need for it.

“I don’t know if we should be rewarding forwards for catching a ball,” he said.