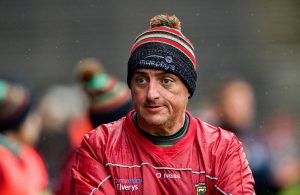 Mayo ladies manager Peter Leahy will need to find new scorers to replace the four first-choice forwards who will miss the National League campaign while playing in the AFL. Picture: Sportsfile

When the Mayo ladies conquered Donegal at O’Connor Park in Tullamore in July last year, it was undoubtedly their most significant victory of their season. It was a milestone win against the Ulster champions for a team which was, and arguably still is, in the midst of a redevelopment process and arguably their best showing to date under the management of Peter Leahy.

However, coming into the new Ladies National Football League campaign, which begins next weekend against Donegal in Swinford Amenity Park, the Mayo ladies face a difficult problem. Of the 1-22 they scored that day in Offaly, 0-18 was notched by three of the four players who will not be available to Leahy next weekend in Swinford.

Sarah Rowe, Aileen Gilroy and sisters Niamh and Grace Kelly have opted to take up professional contracts with AFL sides in Australia which makes them unavailable for the Mayo ladies’ league campaign. Rowe will be lining out with Collingwood, Gilroy has signed up with North Melbourne and the Kelly sisters have joined the West Coast Eagles ahead of the 2020 season. Manager Peter Leahy says this is a big gap to fill but he believes there are players in his ranks who can make the step up to the next level.

“To put it in perspective, four of our six forwards that started the All-Ireland semi-final against Galway are gone to Australia. With two-thirds of your forward line gone, that’s a big hole to fill and I don’t think many counties would be able to take it,” said Leahy this week.

“But we’ve shown ourselves over the last number of years that it is not about the names you have, it’s about the jersey you’re wearing and to show pride in your jersey. There’s plenty of talent in Mayo and we’ll create and generate more forwards and we hope to make it difficult for the four girls coming back to make it into the team. That is really the goal for the league.

“This is about Mayo; it is not about what individuals are gone or big names, it’s about playing for the county.”

Leahy will no doubt be looking towards 2019 All-Star forward Rachel Kearns for a big attacking contribution for the tie with Donegal, and the league campaign as a whole.

Kearns reached the All- Ireland junior club final with her club, CL MacHale Rovers and scored 1-5 in the final, despite their defeat to Donnoughmore of Cork. In terms of defence, Leahy will be hoping that the likes of Danielle Caldwell can carry her impressive performances from the 2019 campaign into this season.

Donegal came through the 2019 Ulster championship relatively unscathed but then found themselves on the wrong ends of defeats to Tyrone and Mayo to go crashing out of the All-Ireland series. The Mayo ladies will do well to keep close tabs on Karen Guthrie; the veteran forward scored 2-4 in the encounter in July and is entering her 15th year of inter-county football.

The Mayo ladies begin their league campaign with three home games in succession. After the Donegal game this weekend, they will take All-Ireland champions Dublin in MacHale Park on February 1 (as part of a double-header with the counties’ men’s teams) and last year’s Munster runners-up Waterford on February 9. The rest of the campaign consists of a trip to Cork on February 23, a home tie with Westmeath (March 8) and a visit to Tipperary (March 22).

The group stage of the competition will conclude away to provincial rivals Galway at the end of March. Depending on how Mayo perform, a final or a relegation playoff may await beyond that. Peter Leahy said the league is the optimal preparation for the championships which follow.

“It’ll be harder than ever to make an All-Ireland semi-final because of the new system whereby six teams in a group play five matches,” said Leahy of the new championship structure. “It is important to use the league to learn because it is mostly the same counties you’ll be meeting further along the line. We’re meeting all the people we’re expected to meet in the All- Ireland series and they’ll be doing exactly the same thing as us; trying out new players and new systems and seeing which player fits where in a particular system and that is what the league is all about.

“Competitiveness is everything. We haven’t had a chance to get a good game in before the start of the league so we’re going to use it as training for the championship.”

Come Sunday, it will have been exactly five months since the Mayo ladies last had a competitive game and that was the All-Ireland semi-final defeat to Galway. With the absence of four key players, that is not a lot of time for a quick turnaround to face a new challenge but Leahy says there is a positive exuberance among the panel ahead of the new season.

“With four girls gone to Australia, it takes a little bit away from the early season but we brought a lot of new girls in, some minor players have been added to the senior panel for the first time this year. There’s a bit of glow about the season in that there’s a lot of youth in there with a lot of learning to happen,” said he.

“We’re moving along nicely. We’re only back three weeks so it’s not like we have a lot of work done but we’ll learn as we go along, using the league as a learning process to get as many through as we can until we get our full contingent back in April and move into the championship.”