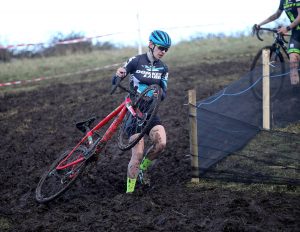 Balla native Maria Larkin carries her bike through the mud on her way to winning the Irish National Cyclocross Championships in Enniscrone. Picture: INPHO/Bryan Keane

On a bitterly cold and damp Sunday earlier this month, the National Cyclocross Championships took place in Castlefield in Enniscrone. After 41 gruelling minutes, Mayo native Maria Larkin was first to cross the finish line to claim her first national title.

Originally from Balla but currently based in Chicago, Maria has been competitively racing in Cyclocross for almost a decade. Having previously finished second three times in this race, this was an extremely proud day for Maria and her team.

Maria has been living in the Windy City since 2012. Speaking from the States this week, she said it was her work, not her cycling, that first took her abroad.

“I went to college in DIT in Dublin, studying architecture. The architecture programme is five years and after three years generally people take a year out and go get work experience,” explained Maria.

“When I did that I went to America, but there was really no employment there at the time, so I ended up working random jobs, nothing specific to architecture. But I liked it so much while I was there that I decided to try and come back. I ended up getting a job at an architecture firm the next summer, and was then lucky enough that they offered me a job after I finished college in 2012, so that meant I could go back permanently.”

It was while she was in America that Maria was introduced to the world of Cyclocross.

“When I moved to America I didn’t really ride my bike at all. When I met my friend Daphne, who is now a professional road racer, she asked me if I want to try racing. There was a really good local scene here in Chicago, you could go to the park and every week there would be upwards of 600 people there racing, and it just seemed really fun and a good way to make friends.

“I began with other disciplines of cycling, and then Cross was something everyone was doing in 2011/12, so I borrowed a bike and gave it a go. And I was really bad at the start! I think I got a flat tyre every second race for my first five or six races, so I was terrible at handling my bike. But I very quickly began to pick it up, and it was really fun because you can begin to make very big improvements very quickly, so that was fun.” 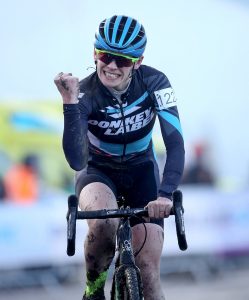 Maria doesn’t cycle professionally so it can sometimes be difficult to balance work and competing in races at the highest level. But she manages to make it work.

“When I first started out I was only doing it very casually. I wasn’t training a lot so I was just working and then racing on the weekends. For the first two or three years I just raced a lot there was no real structure to my training, and that’s something you can do when you’re starting out because no one really no one really has any idea what they’re doing at the start,” she said.

“Then when I came back to Ireland to do my fourth year of college, I wasn’t able to train anyway because architecture school is very time-consuming.

“When I came back to Chicago permanently in 2012, that’s when I started training properly. I’ve sort of always been balancing the full-time job and training because I’ve never been a professional and even now I’m not a professional. It’s hard to get money and get paid, especially since cycling isn’t really that big in America, it’s more of a niche sport.

“Cyclocross is short enough, it’s 45 minutes so it doesn’t require the same volume of training as some other sports. I’m lucky enough that I’m able to balance work and training, so I train in the evenings and as much as I possibly can on the weekend.”

Conditions were as rough on Sunday, with the race taking place along the coast while Storm Brendan was striking up. Extremely muddy and soft ground made for a difficult course, but Maria says the conditions may have worked to her advantage.

“This year I’ve been in a lot of races that were very wet like that,” she said. “The Trek World Cup last September was just as muddy if not muddier than what we had in Enniscrone because it poured rain the whole day before, and then I got to go to the World Championships in Valkenburg which was just as muddy again, so I have experience in how to get through races like that. “

She was crowned National Champion in Enniscrone but Maria has no plans to stop there. She discussed her plans and aspirations for the coming year.

“I would love to have gone to the World Championships this year, but because I wanted to win Nationals more I focused on that. So my next goal would probably be to go to the Worlds in 2021, in Belgium. Really the only other goal right now is being the best National Champion I can be.

“Come next Cyclocross season, I’d like to be even better than I was last year and to try and compete in more races with professionals, and maybe even go full-time. But we’ll see with jobs and sponsorships and stuff. So I’d say that’s my main goal right now, to be the best National Champion I can be!”

*Tadgh O’Sullivan is a Transition Year student in St Joseph’s Secondary School in Foxfor who is on work placement in the Western People.