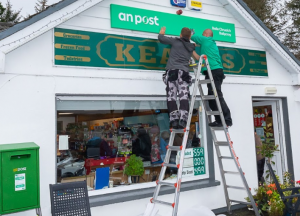 After reopening to much community elation last September, Ballycroy Post Office has been unable to operate at full service because many locals are still receiving their social welfare payments from neighbouring outlets.

When the village’s post office temporarily closed on New Year’s Eve 2018, all of its customers were automatically transferred to post offices in Bangor Erris and Mulranny, each a 15-minute drive away. However, the switch back to their local service was not so streamlined, with individuals left to track down and fill out forms to transfer their payments back.

Ballycroy postmaster Anthony Keane estimated that around half of the customers of the old post office have not yet managed to transfer their details back to the village.

“We didn’t even get any forms in. It was a big deal for people to have to do it all themselves,” he said. “When the other post office closed they got letters to say their payments would transfer, but they didn’t get any letters when this one opened. A lot of people still have to travel,” he added.

As the owner of a newsagent/grocery shop, Mr Keane offered to take on the post office licence because he knew it was a crucial fixture of the community.

Despite the administrative setback, Mr Keane said locals have enjoyed using other aspects of the local service, such as posting letters and parcels, and purchasing One4All vouchers.

Sinn Féin Senator Rose Conway-Walsh raised in the Seanad the need for greater interaction between the Department of Employment Affairs and Social Protection and reopened post offices.

She also called for a debate about the future of post offices, particularly those in rural areas, and urged a “coherent and properly resourced strategy” to secure their viability.