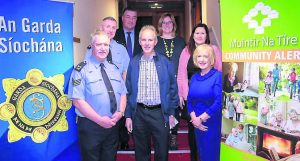 In response to a spate of burglaries in the town, 180 householders in Claremorris have set up a new community alert system.

The message at the launch of Claremorris West Community Alert system was: “If you see something, say something, call the Gardai.” Over two weeks, up to eleven burglaries took place across Mayo. Six of these were homes targeted in the Claremorris area and three in the Mayfield area.

The large crowd in attendance heard advice from members of An Garda Siochana on how best for people to protect their property, and how a text alert system can help in alerting a community to be on the lookout for suspicious activity, whilst also encouraging all members of the community to be vigilant, watch out for each other and create a safer community for all. It was attended by local Crime Prevention Officer, Sgt Tony Cosgrove, Sgt Tony Lavery, Gda Community Officer, John Monaghan as well as newly elected members of the organising committee.

Sinn Féin’s Natasha Warde, who was a candidate in the last local elections, noted she had raised the issue of CCTV installation in the town last year.

“Despite the support we receive from An Garda Síochána, they are finding their jobs increasingly difficult due to lack of allocation of resources from our government. In a stronger effort to ensure public safety and security in our homes, we need a surveillance system installed in our town to deter anti-social behaviour first and foremost.

“The neglect to address this issue has resulted in the escalation of serious crimes in our town, where people are not only feeling unsafe on our streets but unsafe in their own homes! With a population of almost 4,500 and with the increase in break-ins, it is seriously time we had an adequate and comprehensive monitoring system to ensure the safety of our residents.”