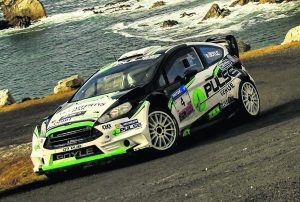 The Mayo and District Motorsport Club have confirmed that the 2020 Mayo Stages Rally will be held in Castlebar, marking a return to the county town for the rally for the first time since 2009.

The event will take place on Sunday, March 8.

The club hosted the annual event in various locations in the Claremorris and Ballina areas between 2010 and 2016 and, more recently, two successful events in Achill in 2017 and 2018 before taking a year out of the rallying calendar in 2019.

Clerk of the Course for the 2020 Stages RAlly will be David Breen, who comes with a wealth of knowledge having successfully headed up the Mayo Stages Rally in 2016. David and his crew have secured local sponsorship, with Castlebar businessmen Gerry Casey (Casey’s Londis) and Pat Jennings (TF Royal Hotel and Theatre) coming on board as joint title sponsors.

Pat Jennings has been involved in previous events and the rally headquarters for the weekend will be located in the TF Royal Hotel and Theatre. Gerry Casey is also no stranger to motorsport as a member of the Mayo and District Motorsport Club and is set to compete on the stages himself over the weekend.

David Breen and his team, many of whom are local to the area, have already spent a number of months checking out potential locations for the stages and they are currently in the process of putting plans in place to ensure that the event runs as safely and smoothly as possible. The Rally will comprise of three stages, each run three times, with the stages located in the Castlebar/Westport area. Part of the preparations require the organising team to call to all residents along the three stages to meet and explain first-hand how the event will run and what to expect on rally weekend.

While the joint title sponsors, Casey’s Londis and the TF Royal Hotel and Theatre, have been confirmed, there is still an opportunity for other local or regional businesses to get on board and sponsor an individual stage. The local community can expect to welcome rally crews from all four corners of Ireland as well as from overseas from March 6-8, and in addition to the influx of visitors to the area there will be a lot of media coverage between newspapers, radio/television slots and social media which will make the Rally it a very worthwhile event to support.

Any individual or business interested in sponsoring a stage should contact Clerk of the Course David Breen. More information regarding the rally launch and other social events which will take place around the rally weekend will be available nearer to the event on the club website www.mayomotorsportclub.com or through club social media.