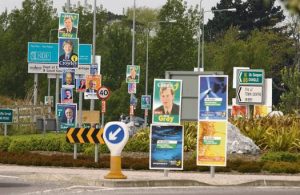 Castlebar Tidy Towns has said it does not support any election posters being erected in the Castlebar urban area.

“With the 2020 General Election announced yesterday, we were contacted overnight by members of the public and some candidates taking part to ask what is the stance of Castlebar Tidy Towns on posters. Our position is that we do not support any posters being erected in the Castlebar urban area, whether political or otherwise. This has been our policy over the last number of years and has been part of our application to the National Tidy Towns competition where we maintained our second gold medal in 2019,” said Castlebar Tidy Towns in a statement.

They have asked candidates to refrain from putting up posters ahead of next month’s General election.

“We therefore respectfully ask that candidates refrain from erecting posters within the Castlebar district in the run-up to the election on February 8t. However, we do accept that there is no legal obligation on candidates to do so and any decision will be entirely theirs,” the statement added.