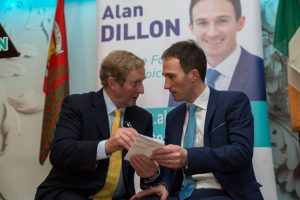 Former Taoiseach Enda Kenney with Alan Dillon at the launch of his general election campaign.

With Leo Varadkar indicating on Sunday that he could dissolve the Dáil this week and that he has decided on a date to hold a General Election, the man he replaced as Taoiseach has tipped first time Fine Gael candidate Alan Dillon as someone of “ministerial potential”.

Enda Kenny is standing aside as TD for Mayo and has urged voters who gave him their No.1 vote in previous elections to pledge their upcoming vote to Dillon. The former Taoiseach was speaking at the former Mayo footballer’s campaign launch on Friday night in the TF Hotel in Castlebar attended by over 200 people.

Alan Dillon was selected as a candidate for Fine Gael at a selection convention almost two years ago and has been building up his own political profile at a grassroots level since then.

“It was Enda Kenny who ignited my passion for politics by demonstrating just what can be achieved for our county and country in politics,” he said on Friday.

“To be taking on the baton is a massive challenge but also an honour and I’m a man that relishes a challenge where the prize benefits the people of Mayo.”

Having previously expressed a desire to hold an election in May 2020, speaking to RTÉ on Sunday Leo Varadkar said that “circumstances have changed” and that although he had made a decision on when to hold an election, there was “respect and protocol” around how to seek a dissolution of the Dáil.

Enda Kenny said he has asked the people who canvassed for him for 44 years to canvass for Alan Dillon and that it was opinion that the Ballintubber native “has the potential to rise through the ranks of Fine Gael and hold a ministerial position if we give him the chance”.

A two-time All-Star winner, Alan Dillon enjoyed a high profile on the national field of play with over 100 games for the Mayo senior football team. He continues to play for his native Ballintubber but hung up his inter-county boots in 2017.

His objective now, he says, is to represent the people of Mayo nationally on the political field.

“Through my education, professional career, sport and business, I’ve forged a character that can be very beneficial within the political arena.”