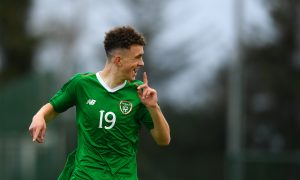 Adam Nugent is one of three players from Westport who have been selected for international duty with the Republic of Ireland U15s. Photo by Eóin Noonan/Sportsfile

Three players from Mayo SL are featured in the squad, all products of Westport United. Goalkeeper Conor Walsh, defender Daniel Kelly and forward Adam Nugent are all named on the 20 man squad. These three players represented Ireland throughout 2019, and will no doubt be looking to add more impressive performances in 2020.

In their first game, the Under-15s take on Australia’s Under-16s at the FAI National Training Centre, Abbotstown on January 18. Donohue predicts that Australia will be a physical challenge for the younger Irish side, but says that will not deter them from their game plan.

“They are Under-16s so their players could be between 12 and 20 months older than some of our players. We’ll be applying our principles of play that we applied at the start of the season during our assessment and international games. The decision-making and communication process is getting better and we’re not going to change anything. I’ve gone away from worrying what the opposition are going to do, I’m all about us and what we can do.”

The team will then fly out to Murcia, Spain for a three-game tournament against Netherlands, Czech Republic and the host nation. Their first game will be against Spain on January 30, and Donohue had high praise for the Spanish Under-15s.

“We played Spain last year and they were the best Under-15s team I have ever seen and I expect the exact same this year. We’ll be organised and we’ll go into the game confidently as we’ve performed well against the opposition we’ve faced so far.

On February 1, Ireland will face The Netherlands in what Donohue says will be a competitive game.

“Martin Reuser, who is Head Coach of the Dutch Under-15 team, said to me last year he would love to have the Irish DNA of the ‘fighting spirit’ in the Dutch teams. I think we’ve moved on, it’s not just fighting spirit, it’s quality football and if you look at our performances against England we started the game with fourteen passes and the ball was in the back of the net. We can compete with the Netherlands by playing football.”

For their last game of the tournament, Ireland will play Czech Republic on February 3, in what will be their third game in five days. Donoghue said his squad will play with the intention of winning every game.

“Czech Republic has invested in their underage teams and are getting them in more often for games. We played them last year in a double-header and we were lucky to win 1-0 in the first game and in the second game they beat us comfortably – they always have strength in depth. Make no mistake our players will be going out in each game to win it.”

A confident mentality from the Head Coach, he’ll be hoping his squad plays with the same mindset.

Very best of luck to Conor, Daniel, Adam and the rest of the squad in the tournament