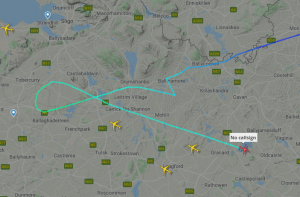 Flybe flight BE655 was diverted to Dublin Airport. Photo courtesy of Flightradar24.com

Three flights to Ireland West Airport Knock (IWAK) have been diverted to Dublin Airport as a result of poor weather conditions in Mayo.

Met Éireann has recorded gusts up to 102 km/hr in Knock.

A Flybe flight from Edinburgh that was scheduled to land in Knock at 11.45am got as far as Ballaghaderreen before turning around to head for Dublin.

Storm Brendan, which has been assigned a Status Orange weather warning by Met Éireann, also forced Ryanair flight FR8142 from London Luton to IWAK to divert to Dublin. 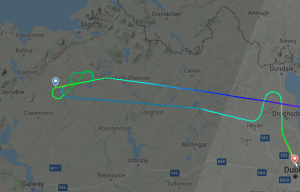 Ryanair flight FR805 rerouted to Dublin after a failed attempt to land in Knock. Photo courtesy of Flightradar24.com

Earlier, Ryanair flight FR805 leaving London Stansted at 7.05am was rerouted to the capital after being unable to land in Knock.

However, a 7.27am Ryanair flight from Liverpool landed in Knock 18 minutes ahead of schedule. Football blogger Philip Flanagan wrote on Twitter that the pilot “deserves some sort of award for keeping the plane on the tarmac in that wind.”

Meanwhile, Flybe flight BE656 due to depart from IWAK to Edinburgh at 12:15 has been cancelled. Also called off is Aer Lingus 2.35pm service from London Gatwick to Knock as well as the 3.10pm flight departing from Knock to London Gatwick.

Passengers are advised to check with their airline for updates throughout the day.

Undertaker David McGowan in talk on loss during Covid-19 times