Young people key to Inishturk island survival, but they are leaving 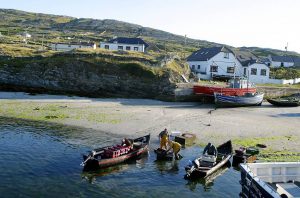 Inishturk island is the furthest Island from the Irish mainland. Photo: Getty

Maggie Young gathers up her groceries as the ferry approaches the tiny island she has called home for the last two years.

Originally from Ballybofey in Co Donegal, Maggie has lived in a range of places, including Bangladesh, Nepal, Bath in England, and now Inishturk, a small island six kilometres from Louisburgh.

Maggie’s arrival on Inishturk was an immense relief for residents who had been living without a resident nurse for six months.

“I love it here,” Maggie says. “It really feels like home. We have adapted to living on the island and could not have found a friendlier group of people.”

Still, the nurse struggles to find medical cover when taking holidays away from the island and cannot leave without finding someone in her stead.

“Particularly around Christmas it can be difficult to get a nurse to come over as resources are stretched,” she explains.

Maggie has settled well into life on Inishturk, but there remains a long-standing trend of depopulation on Ireland’s islands. Those living on Inishturk were alarmed this summer when their numbers reduced to the mid-fifties.

In September there was just one child in the island’s primary school, making the student to teacher ratio an unusually top-heavy 1:2. The child’s father, Joe Whelan, says it is not normal for a child to have no peers. However, the arrival of three new families in recent months has beckoned a new era of hope, and many believe the future could be bright on their 5km x 2.5km rock.

With five children now enrolled, Joe Whelan points out that the school has seen a 500 per cent population increase. The new families have also brought five nursery-age children, meaning it won’t be too long before the school boasts 10 pupils.

“Our population has substantially increased, which is great, obviously. We definitely still need an influx of new people or people who are originally from here to return,” he adds.

Population sustainability is one of the key issues Mr Whelan would like to see included in a new national policy for Ireland’s populated islands. The first cross-Government policy developed for the islands in 23 years is currently in a stage of public consultation. Leading the review, Minister of State for the Irish Language, the Gaeltacht and the Islands, Seán Kyne, said the review is an “opportunity to take stock of what has been achieved and to develop plans for a sustainable future over the years ahead”. Island communities are also encouraged to contribute ideas and identify the main challenges facing those living on off-shore islands during the public consultation process.

“It is refreshing to hear that all of the departments are talking to each other. We are a bunch of communities that fell through the cracks,” Mr Whelan continues.

To increase and sustain islanders, he believes more homes should be built.

When two houses were put up for rent over the summer, the landlord received a barrage of responses, Mr Whelan says

“He was quite amazed that around 20 per cent of the people inquiring were French or German. They were looking for this getaway, peaceful lifestyle,” he says.

But with an ageing population, the islanders don’t want just anyone to join.

“We can afford to be selective with who we take. There were single people who wanted to come, but the landlord thought he would really like a family with school-aged children,” he adds. 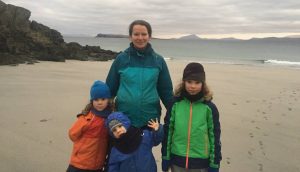 Irena Meilick with her sons Robin (5), Elian (3) and Dario (8). The family moved to the island from Munich in September.

From Munich, Irena Meilick and her family moved to the island in September in search of a peaceful and self-sufficient life.

“I thought about living on an island — especially on a small island — and thought it would be nice to have such a close-knit community. It is amazing how fast you get to know people and how friendly everyone is,” she says, as she and her three children made their way towards one of the island’s beaches.

The family did not visit the island before committing to the move and had only seen their new home online.

“We sent our payment and came. Of course, we could have said no [when they arrived], but actually, we came and moved in and were happy,” Irena explains.

Crucial to their transfer was the reliability of the island’s wifi, as her husband works remotely as a website developer.

“The internet is sufficient and he loves that the pub is only a few metres away,” she says, laughing.

Ms Meilick hopes to create an allotment and keep chickens, as part of her desire to lead an environmentally sustainable life. Standing on the beach on a cold, but dry December day, she says she feels settled on the island and plans to stay for the foreseeable future. It has everything her family needs, “even online shopping,” she adds with a laugh.

For lifelong Inishturk dweller and island marketing director, Mary Helena O’Toole, the Government’s island review is “a long time coming”. The community has worked hard to ensure tourists are attracted to the island, she says. Summertime is peak tourism season when the islanders put on a “full calendar” of events. Seafest, Turkfest, a regatta weekend, ram fairs and sheep shows, are some of the highlights. Last year the island offered “glamping” (glamourous camping) for the first time.

“We are hoping to build on that. We wouldn’t be a massive tourist island so we appreciate what we get, but it would be nice to see a bit of an increase,” Ms O’Toole explains.

But outside of the tourist season, the island is largely quiet and employment opportunities are scarce.

“Keeping young people on the island is a challenge and that is down to employment prospects,” Ms O’Toole says.

While the installation of wifi makes island living more viable for some, technology is not a cure-all.

The prospect of an organic fish farm for Inishturk has been floating for some time and is viewed by islanders as a “lifeline” that would create employment. Fisherman Bernard Heaney is hopeful it could engender “other spinoffs”, such as a smokery.

“If it is anything like the one on Clare Island, it will be great for regeneration. A lot of families settled back on the island there because of it,” Mr Heaney adds.

Born and raised on Inishturk, Bernard Heaney (55) is the last of his siblings living on the island. Nevertheless, he still sees two of his brothers most days. All fishermen, they meet in the ocean, each of them circling the same choppy waters for the same precious fish.

“Most islands are going down in population and here we have an ageing population,” Mr Heaney says. “Young people are key to the islands, and where it is killing us is the kids are leaving.”

It is a painful irony that the island’s youth are so successful in education. Mr Heaney attributes their success, in part, to their leaving at such a young age to attend secondary school on the mainland.

“By the time they get to college they are able to achieve so well because they are settled being away from home,” he muses.

His 21-year-old son is studying robotics at Maynooth University. Chuckling, he says he doesn’t envisage an opportunity for a robotics expert on the island any time soon.

“Once they get their degrees they don’t come back. It is a good thing in a way. I wouldn’t ask my son to stay here and hold him back.”

Enabling a “vibrant, harmonious society” is one of three key principles underpinning the interdepartmental review of the islands. While some Inishturk islanders mentioned the need for a helipad, others a faster ferry service or a doctor who lives full-time on the island, nearly all those this reporter spoke to agreed that the lack of employment opportunities is the biggest barrier to keeping people and communities on the islands.

The public consultation process, in which islanders and stakeholders are encouraged to contribute ideas and identify challenges, runs until February 2020.