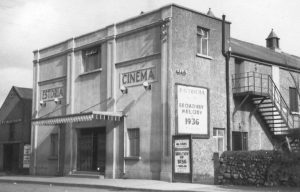 The Estoria Cinema on Teeling Street in Ballina (now occupied by the Men’s Shed group) could accommodate 750 patrons in its heyday in the 1950s.

There was once a time when nearly every town in Ireland had its own cinema.

Times have changed and nowadays large multiplexes in central locations tend to serve a catchment area as big as an entire county.

With many of us now forsaking even the multiplex for the likes of Netflix in our homes the era, of the big screen seems to be drawing to a close.

But the memories will linger thanks to one Dubliner’s labour of love.

The publication documents many of Ireland’s most iconic cinemas including Mayo’s Estoria (in Ballina) and Erris (Belmullet) Cinemas.

Going to the cinema was the most popular form of mass entertainment for much of the 20th century in Ireland and reached its zenith when Jim was growing up in the 1950s.

“There was not that much to do and Ireland was a pretty grey place at that stage. A trip to the cinema — and to a technicolour film, in particular — was real escapism,” he recalls.

Jim notes that the cinema was a particular haven for women in those times and even more so for those in the countryside. Social opportunities were few and far between and so the cinema was a veritable haven where the audience revelled in a bright, colourful, fantasy world.

“Even relatively small towns such as Milford, which had a population of about 550, could sustain a cinema with seating accommodation for almost 300,” Jim remarks.

Back then a cinema not only acted as a valued entertainment outlet it often played a vital social role in the community too.

Jim explains: “Unlike present-day multiplexes, which are often located on the outskirts of towns, the old rural cinemas were usually situated in the very heart of the community and frequently run by local business people. Many were multi-functional and could be used for concerts, plays, public meetings and even circuit court sittings. Their value to the community was often taken for granted and not fully appreciated until after they had closed down.”

A cartographer by profession, Jim spent time working abroad and was devastated on returning to Dublin in the mid-1980s to learn that many of the old cinemas he attended in his youth had closed. Indeed, in many cases, the buildings themselves had been demolished.

Jim set himself the task of pictorially documenting as many old cinemas as he could and the result became a book, Dublin Cinemas – A Pictorial Selection.

Jim was confident the photographs would stimulate a lot of nostalgia but the extent of the reaction surpassed his expectations: “The book was a great success. People really took to it and it revived a lot of memories so I decided to start recording cinemas around the country.”

Capturing these landmark buildings proved a bit of a race against time with many rapidly succumbing to dereliction or demolition.

In many instances, Jim had to source old images and in the instance of Co Mayo, Ballina-based local historian PJ Clarke, was particularly helpful.

Jim remarks on the striking contrast to be found in images depicting the cinemas in their heyday – many of which boasted unique and elaborate architectural styling designed, no doubt, to enhance the fantasy-like experience of going to the cinema – and those capturing them as they are now or as they appeared prior to demolition/redevelopment.

In the introduction to the book, he notes: “Covered in graffiti and stripped of their dignity, these once-popular buildings suffered slow deaths as they lapsed into ugly eyesores. Some were left languishing in that pitiful state for years before they were demolished.

Irish Cinemas – A History in Photographs reveals that Ballina’s Estoria, which was established by Patrick J. Mulligan and Winifred Eleanor Egan, could accommodate 750 people.

The Erris cinema was last operated by the late Seamus Cafferkey who acquired it as part of the drapery shop he purchased in 1971 and ran it for 20 years.

Other west of Ireland cinemas featured in the book includes Galway’s Estoria and Claddagh Palace, the Crescent Cinema in Boyle, the Royal Cinema in Roscommon and The Roxy in Drumshambo.

Many, many more are not included, simply because they no longer exist but Jim is hopeful that the publication of Irish Cinemas – A History in Photographs might elicit additional material from readers which he will use to produce a second volume.

“I hope readers enjoy the book and gain some appreciation of the contribution that many of the old cinemas made to our architectural heritage. I would be delighted to hear from anyone who might be able to put me on the trail of further photographs,” he concludes.