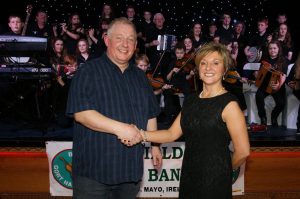 Liam Thompson, chairman of the Leeds Irish Centre, and Teresa Gillespie, Bofield Comhaltas cathoirleach, were delighted with the successful weekend

The UK city of Leeds has long been known as a Mayo town and its Irish Centre has been the focal point for the thousands of people from Mayo who have adopted it as their home.

2020 marks the 50th anniversary of the establishment of the Leeds Irish Centre.

Planned commemorations include the production of a book on the history of the centre, and its staff and committee are appealing to Mayo people with any information, memorabilia or photographs of relevance to share them for inclusion in the publication.

Tommy McLoughlin has been the manager of the centre for 45 of its 50 years. His father was from Culgar, near Kiltimagh, and his mother was a native of Midfield in Swinford but they emigrated to the UK and ultimately put down roots in Leeds in the mid-1950s.

Like so many Irish families in the city at the time, Tommy and his family were members of an Irish club. An old Land League Club, it was located in the centre of the city but was far too small to cater for the numbers frequenting it by the 1950s and so the current Leeds Irish Centre was established.

Its doors opened to the public in January 1970 but it was June of that year before it was officially opened and Tommy acted as MC on that occasion.

Today, many Irish clubs in England are on the decline but the Leeds Irish Centre enjoys strong associations with the GAA and with Comhaltas Ceoltóirí Éireann; participates in the annual Lord Mayor’s and St Patrick’s Day parades and has undertaken extensive fundraising for various causes in the Leeds area over the years.

All of these things have helped the Leeds Irish Centre to garner great respect in the eyes of the city and Tommy is determined to use the occasion of its 50th anniversary to further boost its profile.

“The Irish in Leeds always looked after their own. If a young lad arrived from Ireland they would ensure he got digs and a job and would look out for him until he got himself established.” 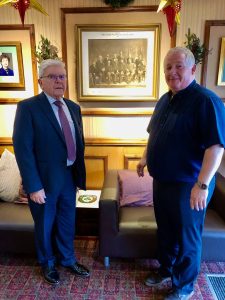 The Leeds Irish Centre’s committee chairperson is Liam Thompson. He remarked that Leeds and Mayo enjoy a shared history of need. For generations, Mayo men and women needed to leave their homes in order to make a living. The Leeds area needed labour to work its mills and mines and construct its buildings and emigrants from Mayo and elsewhere in Ireland met that need.

“They loved their time in Leeds as the city has always made us feel so welcome but home was always home,” he remarked.

In Liam’s case home was Killala — the native place of his mother, Susie McGregor, who emigrated to Leeds in 1949. Over the years, she kept lodgers from Killala, Lacken, Sligo, and elsewhere and was renowned as a go-to person if you were emigrating to Leeds.

“Many Mayo emigrants were only let go to Leeds by their families if they made contact with Susie McGregor as she would either house them or get them into the right house,” Liam explains. “For five decades, the Leeds Irish Centre has been the focal point for the many people who left Ireland and came to the city and I am proud to say it remains so today.

“In recent years, we have continued to keep that link going with the Bofield Céilí Band having visited us twice. Our links are in our DNA and will remain so forever,” he concluded.

The centre’s impact has spread far and wide and Tommy said they are already fielding enquiries in relation to the planned anniversary events.

Sadly there is a dearth of archival material and so the centre is appealing to families in Mayo and beyond who have any connection with the Leeds Irish Centre to share any memories, photographs or mementoes. If you can be of assistance please email: [email protected]