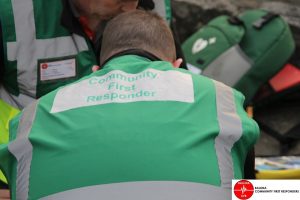 While the group was busy over the Christmas period, there were no calls on Christmas Day.

Ballina CFR received 190 calls in 2019, with 128 of those for chest pain, 45 for stroke, 10 cardiac arrests and seven stood down, figures released by the group show.

Beginning as a basic group to respond to cardiac and choking incidents, it later grew its remit to encompasse stroke and cardiac chest pain, tending to emergencies within a seven-mile radius of Ballina’s town centre.

“We are not unique. There are quite a lot of these groups around the country but we are quite a busy one,” said volunteer and public relation’s officer for the group, Paul McGarry.

“We never mind going out to somebody and we are always happy to see someone who is not as bad as we thought when we were getting into the car,” he added.

A sales engineer by day, Mr McGarry has been involved as a volunteer with the group since its inception in the summer of 2018, having been approached by founder Leonard McDonnell, who is an officer with Ballina Order of Malta ambulance corps.

While many of the participants had prior volunteering experience -Mr McGarry is also a volunteer with St John Ambulance Ireland- he said the members are “from all walks of life” and many joined without formal CPR training. For Mr McGarry his decision to join the group was simple. As a local with parents and in-laws living in town, he would want a swift local response in the event of any emergency. “It is what community is about: looking out for each other,” he said.

The main purpose of the group is to increase the chances of survival for a person suffering a cardiac arrest, in case there is any delay to the ambulance arrival.

“It is not that the national ambulance service cannot respond or is overrun, but in cardiac arrests it is all about speed,” he went on. During a cardiac arrest a person’s chance of survival drops by 10 per cent for every minute that goes by without CPR or defibrillation.

With an ambulance base in town, Mr McGarry said the ambulance invariably arrives before the volunteer responders, who must obey by the rules of the road like every other citizen.

He went on: “All the paramedics are fantastic to us. There are no bones about it; they are the real heroes. A lot of the time we might just sit and hold somebody’s hand but there is a lot to be said for that too.”

There are 19 24-hour defibrillators and a further 22 limited-hour defibrillators located throughout the wider Ballina area that can be used by the general public. If someone is suffering a cardiac arrest, operators at 999/112 will give directions to the nearest defibrillator and send a text to the CFR Group while dispatching a Paramedic Ambulance to the scene.