Mayo man returns to his roots to take over Claremorris company 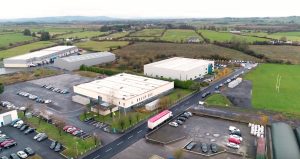 The owner of a Claremorris based company was once stopped by customs going into America after queries arose as to why his fingerprints were filed down. The answer is simple. Two weeks in a west of Ireland bog would do that to your hands, but explaining that to customs officers in America, who had probably never even heard of a sod of turf, never mind seen one, was not easy!

Aiden Corcoran, the owner and CEO of Cosmetic Creations, which has its head office at the IDA Industrial Park in Claremorris where they employ 50 people, has just invested €7.5 million into the company which includes the opening of a second plant in Cork. The company specialize in the creation of cosmetics such as skincare, self-tanning products and body care along with wellness-enhanced food supplements and medical device applications. They create these products for big brand companies Europe-wide and have just announced a newly agreed joint venture with Parnell Pharmaceuticals Ltd, a California biopharmaceutical company.

Cosmetic Creations will have manufactured over four million units this year but within the next three years, this is expected to increase to over 15 million units. They ship to more than 15 countries globally while their clients include private label national brand names and Irish, UK and European retail multiples. Despite having travelled the world over the past two decades, Aiden Corcoran is very proud to return to the county where he was reared. 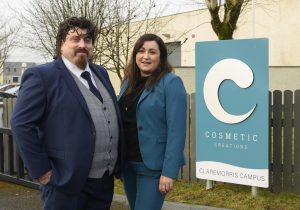 “I was born in a village just outside Mayo Abbey. We lived there with my grandparents until 1981 or 1982. I was my grandmother’s ‘darling eye’. She used to bring me into Claremorris shopping and I got my first pair of shoes in The Square. My father was a garda and he was transferred to Tuam so we moved to Kilconly.”

He attended the national school there and St Jarlath’s in Tuam. “From here I moved lock, stock and barrel to the USA. I was one of the Morrison Visa guys. I remember I was getting checked in at the border. At the time only Green Card owners got their fingerprints taken. It was done the way you would see it on tv with the ink and the roller. But when it came to my turn, the tops of my fingers were all worn down because I had been in the bog turning turf for two weeks. I was asked why I filed my fingerprints down and I had to explain what the bog was and what turf was so he had to go and confirm it with someone else!”

Aiden spent a number of years working in America but returned home to complete a degree in mechanical engineering at DIT Bolton St. “I never thought I would be back to Kilconly or Mayo at that stage!”

He worked privately for some time as a technician with Hewlett Packard in Dublin where he worked his way up to a scale-up engineer. “My job was to look at products being made across the world, they might be making 40,000 units a month. I figured out how to increase production to maybe four million per month. So I looked at building a factory and getting the equipment for it. I was one of the three engineers in the world that did that for the company. I ended up working in Oregon on the west coast of America in research and development.”

He built a team of Irish engineers, one of whom was an Irish girl called Lorraine and one night at the Christmas party one thing led to another and 19 years later they are married with three children. The couple moved to Dublin with Hewlett Packard when Lorraine was pregnant with their first child and eventually moved to Galway where Aiden worked with Boston Scientific. Lorraine worked with Abott Diagnostics.

Aiden and the family moved to Westport in 2010 where he worked for Allergan Pharmaceuticals. “I helped them build the factory, finding and sourcing equipment for scale-up. Making sure the factory was 21st century and working with a big team of engineers.” Around this time, Aiden and a group of engineers also founded ‘Horizon’ in Westport which supplied their engineering resources to companies. “We started with six people and grew that to 70 in three to five years.”

By chance in 2016, Aiden was contacted by John O’Sullivan who asked him to look at a company in Claremorris where he made cosmetics. “He wanted someone to look at it so he could prepare it to sell at some stage. Six hours later, with lots of pots of tea and nice sandwiches, we had the problems fixed and the place bought!”

Having left Mayo at five years old, Aidan had returned to the area, having bought the factory at 42. “The culture and community spirit of the place was great. The staff there were incredibly innovative and made some wonderful products so myself and Lorraine said if we could build on the knowledge and scale it up, we could have something successful.” And that they did. 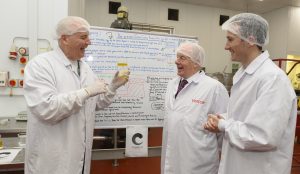 The factory itself was built in 1979 by the IDA. Neutrometics, a California based cosmetics company initially founded Cosmetics Ireland at the site and manufactured for the European market. In 1999, having gone through a number of ownerships, an Australian group moved to the company to Europe and closed the Claremorris factory with the loss of 26 jobs.

John O’Sullivan was the managing director and did a management buy-out that October, founding the company as it is today. He re-hired some of the staff and got a contract from the old company which has lasted to this year. “With a workforce of 26 in 2017, we have now grown it to 50 people and have expanded into Cork with 41 people. We have managed to hold onto the can do, add value attitude. Mayo people don’t know how to say no! Over the next three years, we hope to expand the Claremorris workforce by another 30.”

Aiden said: “We are contracts formulator and contracts manufacturer so we don’t have any brands that we own. Brand owners come to us and get us to make the product. We formulate it and manufacture it. John had about 20 clients built up. A lot of these grew to higher volume and Cork has helped that. We have launched ten new brands and 50 new products to the market over the last three years. We represent 40 to 50 percent of the supply chain of tanning and beauty care products in Ireland, while have won 15 national awards over the past 18 months.”

Aidan noted of the Claremorris team: “They are fantastic, they have seen and done it all. There is great value in having a team who are passionate about what they do and know their stuff. They are making a niche for themselves in more complex, high-end products. In three to five years we hope to extend the site and double the workforce. We are the only manufacturing company in Claremorris and are a little bit anonymous but we are getting there!”

They say from little acorns, mighty oaks grow, this is certainly the case in the story of Aiden Corcoran and Cosmetic Creations. 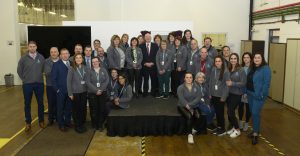