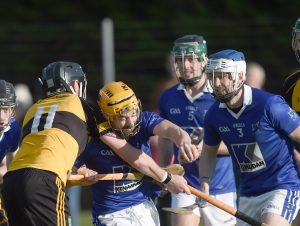 Tooreen captain Stephen Coyne, in action here against Four Roads in the Connacht quarter-final, will hope to lead his team to a first-ever appearance at Croke Park.

For the past eight years now there has been round-the-clock adoration in Tooreen. Morning, noon and night, every minute of every day, with the exception of Good Friday, someone has been on their knees inside St Mary’s Church having a chat with the man up above.

Perhaps it’s no coincidence the local hurling team is on the brink of immortality.

This weekend, Tooreen will contest their second All-Ireland semi-final in three seasons, tantalised by the prospect of a first-ever trip to Croke Park. The obstacle to their dreams is substantial, but if their former curate was able to build an airport atop a boggy hillside outside Kilkelly, then anything is possible.

Speaking of priests, it’s Fr O’Neill’s who, for 60 minutes next Saturday, will stretch every fibre of their being to try to deny Tooreen a fairytale end to what has already been a quite remarkable season. And to delve into the Cork side’s background uncovers some daunting propositions that Tooreen will have to contend with, like how six Fr O’Neill’s players are panellists on the Imokilly divisional side that this year won their third consecutive Cork SHC title.

This year it was Glen Rovers — the second most successful club in the history of the competition — who Imokilly beat in the final, Midleton the year before, and Blackrock the year before that. With 1-7 to his name, Fr O’Neill’s man Declan Dalton was their top scorer in this season’s decider and to give you an indication of the sort of company Dalton was keeping, Imokilly’s next highest scorers were Seamus Harnedy and Bill Cooper. Recognise the names?

Dalton, who has just turned 22, will soon, like those, be a regular Cork senior, of that there seems little doubt. He made his National Hurling League debut against Kilkenny in February this year and featured against Wexford too, but knee surgery ruled him out of the rest of the inter-county season. But he has bounced back with a bang.

Corner-back Ger Millerick is another of the Fr O’Neill’s contingent on the Imokilly XV, likewise Mark O’Keefe, who occupied one of the midfield berths alongside Cooper. O’Keefe is joint-captain of Fr O’Neills with Dan Harrington. Millerick, meanwhile, did like Declan Dalton this year and made his Cork senior debut having, quite remarkably,appeared in All-Ireland minor, U21 and U20 finals for the Rebels since 2017. He’s joined on the Fr O’Neill’s starting XV by his brothers Mike, Thomas, and Joe, whilst another brother, John, is among the substitutes.

So highly rated are Declan Dalton and Ger Millerick that both have been named as Cork Senior Hurling Club All Stars, and there’s no doubt that Fr O’Neill’s are what you might call a ‘coming club’, given that they also won 2018’s Cork U21 ‘A’ Hurling Championship. It was — a rare thing for a team based in the east of the county.

So when the Green and Red (yes, ironically, they will sport the Mayo colours against Tooreen on Saturday) went and added intermediate county and provincial intermediate honours to the cabinet this year, it was their first Munster title since winning the junior equivalent in 2006, a season in which they went on to land the All-Ireland honours too, in Croke Park.

So, that’s the background to those ey who stand in the way of Mayo and Connacht’s finest. In fairness, it’s not difficult to talk up Fr O’Neill’s, and there’s no question but that they will be hotly fancied to triumph in Tullamore next Saturday, but you only have to consider that last year’s Connacht champions Oranmore-Maree beat Charleville by six points in the All-Ireland intermediate final earlier this year to appreciate that there is no reason why Tooreen should feel out of place against Cork opposition at this late juncture of the competition. And they don’t. They had only lost by five points to Oranmore-Maree in the 2018 Connacht final having had one man sent off before half time and another sent off midway through the second half.

More importantly, they’ve had their victories too — and significant ones at that.