Lisa Chambers TD claims she was ‘singled out’ 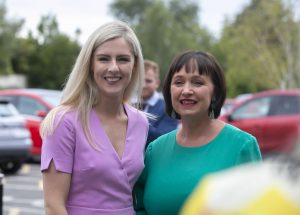 Fianna Fáil TD Lisa Chambers has said reports of footage of her voting in the Dáil whilst sitting in the seat of a party colleague are inaccurate.

“There is no footage of voting at all,” Ms Chambers told the Western People.

She said the video footage reported in the Sunday Independent shows her sitting in the seat of Timmy Dooley but not casting any votes.

The newspaper had said footage from the Dáil on January 17 showed Deputy Chambers in Timmy Dooley’s seat for nearly 50 minutes during votes.

Deputy Dooley has said he was present in the chamber at the time of the votes but does not know where he was sitting while the seven votes were taken.

The Castlebar TD, who was caught up in the Dáil ‘votegate’ controversy, claimed she has been “singled out”.

“Timmy has confirmed he was in the chamber like everyone else. This is no different to the multiple Government ministers and TDs across the house who have had votes recorded for them while they were not in their seats and elsewhere in the chamber, even the Taoiseach said he has voted for others.

“On the day in question you can see many other TDs were in different seats, this was entirely normal and people moved throughout the voting block, so I am unsure why I am being singled out in this regard,” said Deputy Chambers.

She said sitting in different seats in the House was previously common practice.

“This was a common occurrence across the House and has now been cleared up by the Ceann Comhairle and no longer occurs. In my own view, the Government is under pressure with the Dara Murphy scandal and attempting to deflect from that issue,” Deputy Chambers added.