A shepherding dream team from the Andes and Nephin 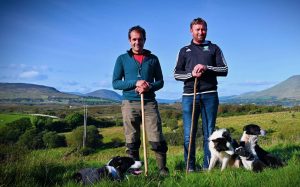 Experienced shepherds Paul Walker and Alan Moran have joined forces to set up a new sheepdog training and demonstration business in Newport.

A pair of shepherds with skills honed on the hills of Newport and the Andes mountains have established a sheepdog training and demonstration business.

The Newport Shepherds has been set up by sheepdog masters Alan Moran and Paul Walker. Alan is world-renowned in sheepdog circles and his family have farmed the hills of Derrada, outside Newport, for generations. He has joined forces with Chilean shepherd Paul Walker, who has brought the knowledge he has acquired from goat herding in the Andes to Mayo.

The pair train working dogs for farmers and also showcase their animals’ talents as part of a unique tourism experience.

“We are shepherds who want to share our everyday work and life with people and help them connect with the dogs and this amazing landscape,” explains Paul.

Born and raised in Central Chile, Paul shepherded goats in the Andes after falling in love with the life and work of the goat herders who live high in the South American mountain range. His passion for Irish sheepdogs brought him to Ireland six years ago and he relocated to Mayo last year.

“I bought a dog from Ireland and took him to Chile. I tried to train him there but I never could so I said I will have to come here and learn,” said Paul.

Alan trained his first sheepdog at the age of 11. One of his dogs, ‘Lad’ went on to become one of the most important border collies in generations siring a host of talented sheepdogs.

“He was super powerful, keen, had great style. He had everything you would want in a dog really,” recalls Alan, who explains that the Irish sheepdog has attributes that mark them out from similar animals reared in the UK.

“The dogs in Ireland would be more powerful. They are fit to work cattle and sheep whereas in Wales and Scotland they tend to just work with sheep. It takes a stronger type of dog to be able to work with sheep and cattle like they can in Ireland.” 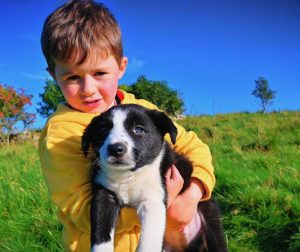 One of the puppies at the Newport Shepherds farm in safe hands.

The canine experts say it can be difficult to come across a dog that ticks all the boxes.

“A good sheepdog is hard to find. It’s a mixture of brains, the dog has to be trainable and have a natural feel for sheep. The dog needs to know where to go, where to balance a sheep and have good stamina and temperament. All those things make a good dog. It’s very hard to find all those traits in one dog,” says Paul.

Alan adds: “Dogs are like people or footballers. Some are just naturally talented and then you might have one that might not be the most talented but he is awful willing and can still make a good dog.”

Read the full article in this week’s Western People.