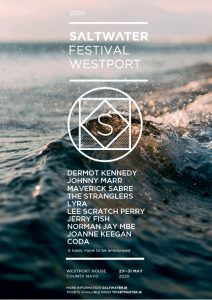 A new festival will come to Westport for the June bank holiday weekend next year, with Dermot Kennedy and Johnny Marr set to headline.

From the organisers behind the popular Donegal festival Sea Sessions, Saltwater will take place in the grounds of Westport House from May 29-31 2020.

Also joining the lineup is a host of acclaimed international and Irish acts, including Maverick Sabre, The Stranglers, Lyra, Lee Scratch Perry, Jerry Fish, Norman Jay, Joanne Keegan and Coda. Others will be announced over the coming months, with over 60 acts due to play across three stages.

The organisers of Saltwater festival say it will be an expression of life on Ireland’s rugged wild Atlantic coast. Celebrating music, food, culture, wellness and Westport’s rich heritage, the festival will “bring together like-minded people from home and abroad.”

Festival Director Ray O’Donoghue said: “There’s so much history in Westport and Westport House that when the opportunity to host a new festival came up we jumped at the chance.”

“We put a lot of work into getting the right lineup and we’re over the moon with how it’s tuned out.”

He said the festival is not just about the music lineup, but about experiencing all that Westport has to offer.

Tickets go on sale from Ticketmaster outlets nationwide and on www.ticketmaster.ie on Friday December 13 at 9am. Early Bird Tickets are priced from €144 for three days. Camping options are also available. There are also limited single day tickets available from €64. Check out www.saltwater.ie for more details.