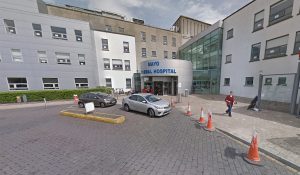 Security issues have been raised following an incident at Mayo University Hospital after a patient exited a window and fell approximately 35ft.

The patient was said to have received “serious injuries”, having landed on a bin lid that broke his fall but subsequently broke with his weight.

At the HSE West forum in Galway last week, Independent Cllr Michael Kilcoyne asked if the incident on October 26/27 last was being investigated.

He said he understood that issues surrounding the window had been was previously brought to the attention of hospital staff.

CEO of Saolta University Health Care Group, Tony Canavan, said the situation was being investigated in line with normal processes, and that all elements will be “explored and risk-assessed accordingly”.

It was emphasised at the meeting that it was a “very isolated” situation.