Mayo on Ice nearly cancelled due to ‘mad’ insurance costs 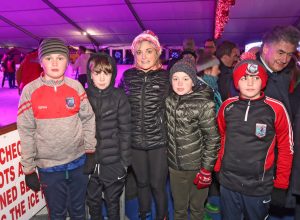 While Mayo on Ice has been a major success for Castlebar over the last three years, the winter rink almost didn’t make it to 2019 due to excessive insurance costs.

Five years ago, the company’s insurance was €5,200, with the business expected to pay the first €1,000 of a legal claim. This year, Brian Magee, owner of Carousel Ireland Limited, the company behind the annual event, said he was quoted €30,000 with an excess of €10,000.

“It is just mad and completely unsustainable,” he told the Western People.

Mr Magee had planned to abandon the event this year due to spiraling premiums. However, keen to attract shoppers and festive goers back to the town, Castlebar Chamber of Commerce (CCOC) pushed him to find a more affordable broker. He eventually managed to whittle the fee down to €23,000, with €5,000 excess.

Despite the odds, the skating rink opened to big crowds in Castlebar’s mall last Friday.

While Mr Magee is grateful for the support of the CCOC and local businesses, these premiums are far from sustainable in the long run and he doubts the event will take place in 2020.

“It probably will be the last year for ice rinks in Ireland, certainly in provincial towns,” he said.

Although his business has been subjected to injury claims over the years, there have been “no more than you would expect”, he said.

“If you go on an ice-rink you are going to fall, and if you don’t fall that is a bonus.

“The problem is you can walk down the street, fall over on the footpath and then claim. The claims culture in this country is over-generous.”

Mr Magee said  he runs events that aim to “boost the profile of a town” and it is a “real shame to see these events destroyed by insurance costs”.

However, the plight of rising premiums is not confined to winter activities.

The owner of Wavespweeper Sea Adventures, a Belmullet leisure company, had to scrap a coastal assault course after his insurance increased by €9,000 in two years. The hike occurred in spite of him receiving no claims during that period.

Owner David Tyrrell said he was forced to diversify his offerings when his provider refused to cover the course from June this year. Now, instead of an assault course, visitors can enjoy stand-up paddleboarding.

“Luckily I haven’t lost any business from schools but I will have lost some from tourists,” he said. “It is the same with adventure businesses up and down the country in Ireland.”

Mr Tyrrell added: “It is a real shame because it (coasteering) is an absolutely fantastic sport.”