Holidays are coming – and so is the Coca Cola Christmas truck!

The iconic Coca Cola Christmas truck will be in Ballina’s Military Barracks from 2-8pm tomorrow and the town is braced for a surge of visitors from as far away as Donegal. 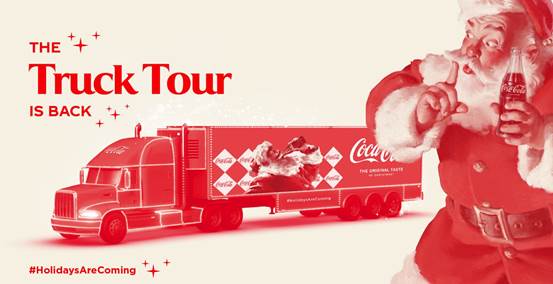 The iconic Coca Cola Christmas truck will be at Ballina’s Military Barracks tomorrow between 2 and 8pm.

This is the second year in a row that the truck, which features in the much-loved Coca Cola Christmas advertising on television, includes a stop-off in Ballina.

Last year an estimated 12,000 people from throughout the north west came to see the Coca-Cola Christmas truck on what turned out to be a magical evening in the north Mayo capital.

Tomorrow visitors will be able to enjoy a can of Coca-Cola Zero Sugar, Diet Coke or Coca-Cola Original Taste and have an exclusive family Christmas photo taken while listening to Christmas carols performed by The Ramparts – an Irish a cappella barbershop choir.

So don’t miss out on an experience sure to make magical memories that will last a lifetime.

This year also sees the return of Coca-Cola’s Christmas merchandise cart, with all proceeds from sales being donated to the company’s charity partner, St. Vincent de Paul.

To coincide with Coca-Cola’s ‘World Without Waste’ global commitment to collect and recycle a bottle or can for each one sold by the year 2030, Coca-Cola will also donate 10 cent for every can recycled throughout the truck tour to St. Vincent de Paul.

Petre Sandru, country manager of Coca-Cola Ireland said: “We can’t wait to start spreading the Christmas spirit across the island of Ireland with the return of our iconic truck along with our other Christmas activity. We’re also excited to help support talented local producers to be able to sell their goods at the truck stops, with the tour bringing a sprinkling of festive magic to consumers. In addition to this, it is important that we also reinforce our commitment to working towards zero waste by promoting recycling and donating to our charity partner”.