A route identified some 20 years ago as the preferred option for an upgrade of the N17 is expected to be among those announced as possible choices for a new road next summer. 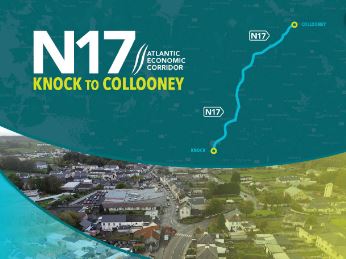 A team of experts will compile a list of route options for an upgrade of the N17 from Knock to Collooney before revealing them to the public next summer and among them will be the route chosen that ran east of Charlestown and linked in with the N5.

Project manager Fergus Meehan said new route options would have to be selected because designers couldn’t “stand over” the plans that were “20 years old”. He said the routes were “dated” and there have been changes to legislation, environmental regulations and various standards.

“The route selection process is much more detailed now,” said Mr Meehan, adding that the project team is working on a “clean landscape” and is “not being influenced by anything in the past”.

Of the 55km N17 Knock to Collooney scheme, three-quarters had a preferred route in the past but it only took in a small section on the Mayo side of the county border.

It ran half a kilometre east of Charlestown, crossed over south of Tubbercurry onto the west side of the town and there was an ‘on-road’ section near Achonry as well as an upgrade of the current route from Achonry to Collooney.

“If there’s a potential such an application could be in the line of a route option we are recommending it be stalled,” said the project manager who has encouraged people to contact them before submitting planning applications.

The project team can be contacted in Sligo on 071-9111975 and an engineer will be allocated to their case.