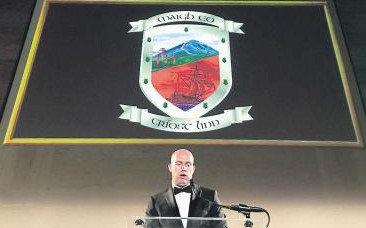 The Mayo GAA International Supporters Foundation has confirmed to the Western People it has given Mayo County Board a deadline of 5pm today (Monday, December 2) to accept an offer that would see the Foundation invest a minimum of €1million in Mayo GAA over the next five years.

The astounding offer has been made despite an ongoing dispute between the parties that currently sees €250,000 raised for Mayo GAA being withheld from Mayo County Board by the Foundation.

The Foundation now says it has received separate pledges of €500,000 and €250,000 from both a new and an existing donor, which together with the retained funds puts it in a position to commit the whopping seven figure sum to Mayo GAA activities.

The Foundation has confirmed the offer was made in a letter sent last Tuesday to Charlie Gilmartin, solicitor to Mayo County Board, but several conditions were attached, including:

The letter states how Mr O’Leary, in the event that Mayo County Board is unable to prove that some or all his personal donation was used for its intended purpose, seeks the return of the un-vouched amount but has committed to lodging that amount with the Foundation.

The Foundation is also requesting an update from Mayo County Board on its recent meeting with Croke Park and Connacht Council and has asked that consideration be given to the Cairde Chorcai fundraising model, which it says has been set-up independent of Cork County Board and on very similar terms to the Foundation.

If the executive officers of Mayo GAA decide that the terms of the offer from the Mayo GAA International Supporters Foundation are not acceptable, the Foundation has recommended that an EGM is held this week to allow the clubs of Mayo GAA to vote on the offer.

In a separate development, a proposed meeting between the GAA’s director general Tom Ryan and the Mayo GAA International Supporters Foundation has fallen through. The parties had been due to meet today (Monday) with Foundation representatives prepared to travel from London.

It’s understood that an alternative location for the meeting could not be agreed when work commitments prevented a Foundation representative from attending Croke Park.