Awards night is a football feast in every sense

The Mayo Football League’s Annual Presentation Dinner and Awards Night took place on Saturday night in the Castlecourt Hotel to honour the best that local soccer had to offer in 2019. Always a highlight of the Mayo sporting calendar, it represents a chance for goalkeepers to aim for clean plates rather than clean sheets, allows defenders to dig into a dessert rather than last-ditch tackles, lets midfielders build up appetites instead of attacks, and swaps out the striker’s feast of goals for just a regular old feast. 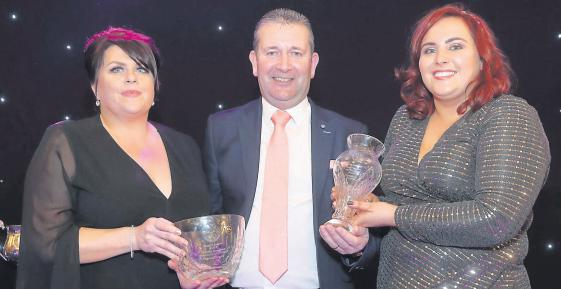 The evening began with speeches from Gerry Sweeney, chairman of the Mayo FA, and Gerry Tully, chairman of the Connacht FA. Both were complimentary of the efforts of all involved in local soccer, including the members of the press in attendance, who were all no doubt pleased with this recognition! Following this and a three-course meal, attention turned to the seemingly endless row of trophies and medals lining the table on the stage.

The coveted Player of the Season awards were saved for the back end of the night’s proceedings, hyped-up accordingly by the host of the event, Angelina Nugent, and it began with the awards for Masters Division 2 Player of the Month and the naming of the team of the season. The Golden Boot for this division was collected by David Grant, who scored 20 goals enroute to Claremorris earning promotion to the upper tier of Masters football. He later capped this off by picking up the Player of the Year.

Next up came the announcement of award winners from Calor Gas League Two. Newport/Mulranny Wanderers catapulted themselves into League One next season, thanks largely in large part to the goalkeeping efforts of Niall O’Malley, who was named Goalkeeper of the Year. They came up via second place, as the goalscoring efforts of Luke Ruane of Moy Villa with 23 goals meant the Attymass-based club won this division. His teammate Ciaran Gaughan would make his way to the stage later in the evening to pick up his Player of the Year award.

In League One, Westport United ‘B’ claimed top spot with four of their players making the team of the year: Michael Gibbons, Niall Quinn, Padraig Folan, and Mark McNally, with McNally named the Player of the Year.

Before focus switched to the award winners from the Castlecourt Hotel Premier League, a team from that division was given the chance to take centrestage. For their consistent and engaging presence on social media and their excellent website, Conn Rangers were named Club of the Year. They were not so lucky on the playing field however, and the Premier League was all about the all-conquering Ballina Town ‘B’, who went unbeaten for the season. They had six players named on the Team of the Year and claimed all three nominations for the Premier League Player of the Year, with centre-back Conor Quinn picking up the award.

Of course, it is not just the players who have their year-long efforts recognised and this year history was made at the awards by two first-ever female recipients of both the Club Person of the Year and Henry Downes Service to Football Awards, Lorraine Ryder of Newport/Mulranny Wanderers and Myra Deacy of S&F United respectively. The second Service to Football award went to Harry Reilly of Iorras Aontaithe.

The Hall of Fame award was bestowed upon Ballina Town legend Gerry Knight, who has spent over 50 years acting in various capacities for the club.

The Manager of the Year award was given to Michael McNicholas for guiding Castlebar Celtic to a first Super League title since 2011. Celtic were well represented at the awards, with Jordan Loftus picking up the Golden Boot for his impressive haul of 28 goals. However, Loftus missed out on the Super League Player of the Season award to Darren Browne of Westport United.

Browne was also the recipient of a Special Recognition Award, alongside his teammates Cillian McGlade and Gary Cunningham and Manulla FC’s Gerry Canavan. They were recognised for representing their country earlier this year.

A brand new award, the U19 Footballer of the Year was given to Tommy Forde and was announced by former Republic of Ireland midfielder Noel Hunt via satellite transmission.

All eyes in the room turned to the televisions ahead of the unveiling of the Goal of the Season award. Rokas Mikuckis’s wonderful first-time volley against Westport United was chosen and the footage of the strike enthralled the entire audience, apart from perhaps Gary Cunningham, the Westport goalkeeper who was the victim of the venomous volley!

A respectful hush fell over the room as the presentation of the Posthumous Award was made to the family of Westport United footballer Adam Mulchrone, who died tragically in early 2019. He was described by Gerry Sweeney as a beloved member of the Mayo football family.

The final award of the night was the Mayo League Footballer of the Year for 2019 and it went to Jordan Loftus. An absolutely delighted Loftus paid tribute to his teammates for their role in his winning of the award and for their part in his 28 league goals.