Gardaí will be stationed in supermarket aisles throughout the county over the coming weeks to raise awareness about the second annual Mayo Garda Youth Awards. 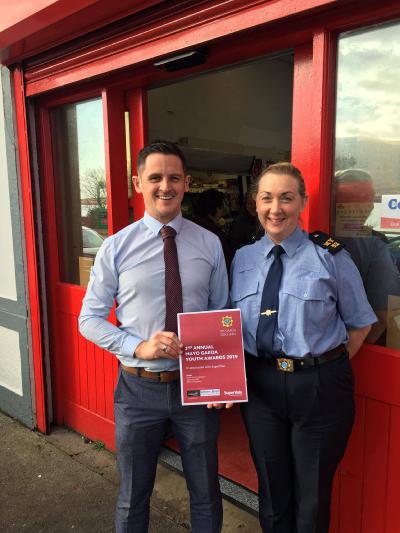 With a pop-up information stand in eight SuperValu stores across the county, gardaí are able to interact directly with people as they go about their business.

The competition, sponsored by SuperValu, officially opened for applications on November 8.

“We, in An Garda Síochána, see the difficult side of society, but we also see the good, and there is an awful lot of good going on in the community,” he said.

It is up to members of the public — family, friends, teachers, youth workers — to nominate young people aged 13 to 21 who are worthy of the recognition. The Garda Youth Awards take place throughout the State, with regional winners invited to compete at a national level.

As part of his role in community policing, Garda Colm Boyle frequently engages with schools and youth clubs across the county.

“It is when we go to places like these we see brilliant initiatives being done. Through the Garda Awards these initiatives can be recognised,” he said. “These awards are for everyone, so long as they are young. People who have done or are doing something positive in making their communities better places.”

The Westport garda and four-time all-star GAA footballer was unable to attend last year’s ceremony as he was playing a county match. However, he is “fully booked in” this year and looking forward to the event on January 18 at the Great National Hotel in Ballina.

If anyone needed further incentive to apply, the Mayo star said he is always “delighted to have the chats” with young fans.