‘The Waits’ returns to Castlebar

A very special and much-loved Castlebar Christmas tradition is being revived next month.

‘The Waits’ was a festive mainstay in the county town for more than 150 years. Many Castlebar households have fond memories of the sound of Christmas carols being played on an accordion as their family names were called out in the dead of night.

For one night this Christmas – on Friday, December 20 at 8pm – ‘The Waits’ will return to streets of Castlebar.

Stephen Guthrie will be accompanied on the accordion by his lifetime friend Michael Corcoran as he walks up the street, calling out the names of Castlebar families from days gone by. There will also be a musical finale to the procession. For more than a century, parents would wake children to hear the sounds of these mystery men breaking the silence of the night with warm greetings “on a cold and frosty morning”.

Stephen Guthrie, Dessie Dunne, Joe Geraghty, Paddy Clarke, Pakie Forde, a Mr McCormack, and not forgetting Paddy “The Bull” Gannon who did it for one year, are all names associated with this great piece of Castlebar history. A donation will be made in their memory – and that of all ‘The Waits’ protagonists – to Mayo Roscommon Hospice, with the proceeds from a collection on the night of the revival. ‘The Waits’ procession will start at Moran’s pub on Rush Street at 8pm and proceed up Main Street to Ellison Street.

McHale Road native Stephen Guthrie performed ”the Waits’ for more than 25 years before the tradition drew to a close in the early 2000s.

Stephen had only intended to help out his neighbour Dessie Dunne as a once-off but ‘The Waits’ became a huge part of his life. Stephen even met his wife through the annual Christmas rite.

With Dessie on the accordion, Stephen was given a list of names to call out on his debut outing in 1977.

He said Dessie was an ‘immaculate little man,’ and Stephen discovered his dapper appearance served more than just a fashionable function. “Dessie had a Crombie coat and I soon found out that the Crombie could hold six bottles of Guinness! We got as far as Exclusive Fabrics before we got to Main Street when Dessie said, ‘We’ll have a break here now,’ and produced two bottles of Guinness. There was another break at John Henaghan’s Chemist shop and by McHale Road more bottles of Guinness and come out. Houdini had nothing on Dessie and his coat!” laughed Stephen.

To the uninitiated, The Waits could be a shock to the system. The late John Quinn, a former Gda Sgt, was a newcomer to Castlebar when he was stirred from his sleep in Marian Row by Stephen and Dessie. “The next thing John comes flying down the street after us shouting, ‘What the hell do you think you are doing and cut out playing that accordion you’ll have the place woken up!'”

The pair explained the tradition to the Garda Sgt and the next year Stephen and Dessie received a very different welcome. “John brought us unto the house and produced a five naggin bottle of whiskey. By the time we got out of the house, we had the names in Marian Row and St Bridget’s Crescent all mixed up. I think I was calling out the names of people who were dead for years!” joked Stephen.

With age catching up on Dessie, Stephen came up with a ‘brainwave’ to try and aid his pal. They bought a tape recorder and played the strains of famous Irish accordionist Dermot O’Brien to give Dessie a break from the heavy instrument.

“Dessie was holding it this way and that and kept asking me ‘How am I sounding now?!’ I told him he was playing a blinder!” But the tape recorder failed to last a single outing.

“We were coming up Main Street and on to Ellison Street and I don’t know was there a blast of lightning or what but he threw the tape recorder up in the air. Dessie said, ‘I thought I was going to get electrocuted,’&nbsp; I had to tell him, ‘Sher there are six batteries in that thing!” Stephen recalls fondly.

Some homes believed you couldn’t look out at ‘The Waits’ as they passed while others waited by the window.

“Parents would tell the children, ‘That’s ‘The Waits’ now so you have to be good. Those lads will tell all the news to Santa Claus.’ It was just a lovely, lovely tradition,” said Stephen.

Stephen tried unsuccessfully to get someone else to carry the torch for ‘The Waits’ but he hopes the December 20 revival will at least stir some memories and create some new ones for a generation that never experienced the unique ceremony. 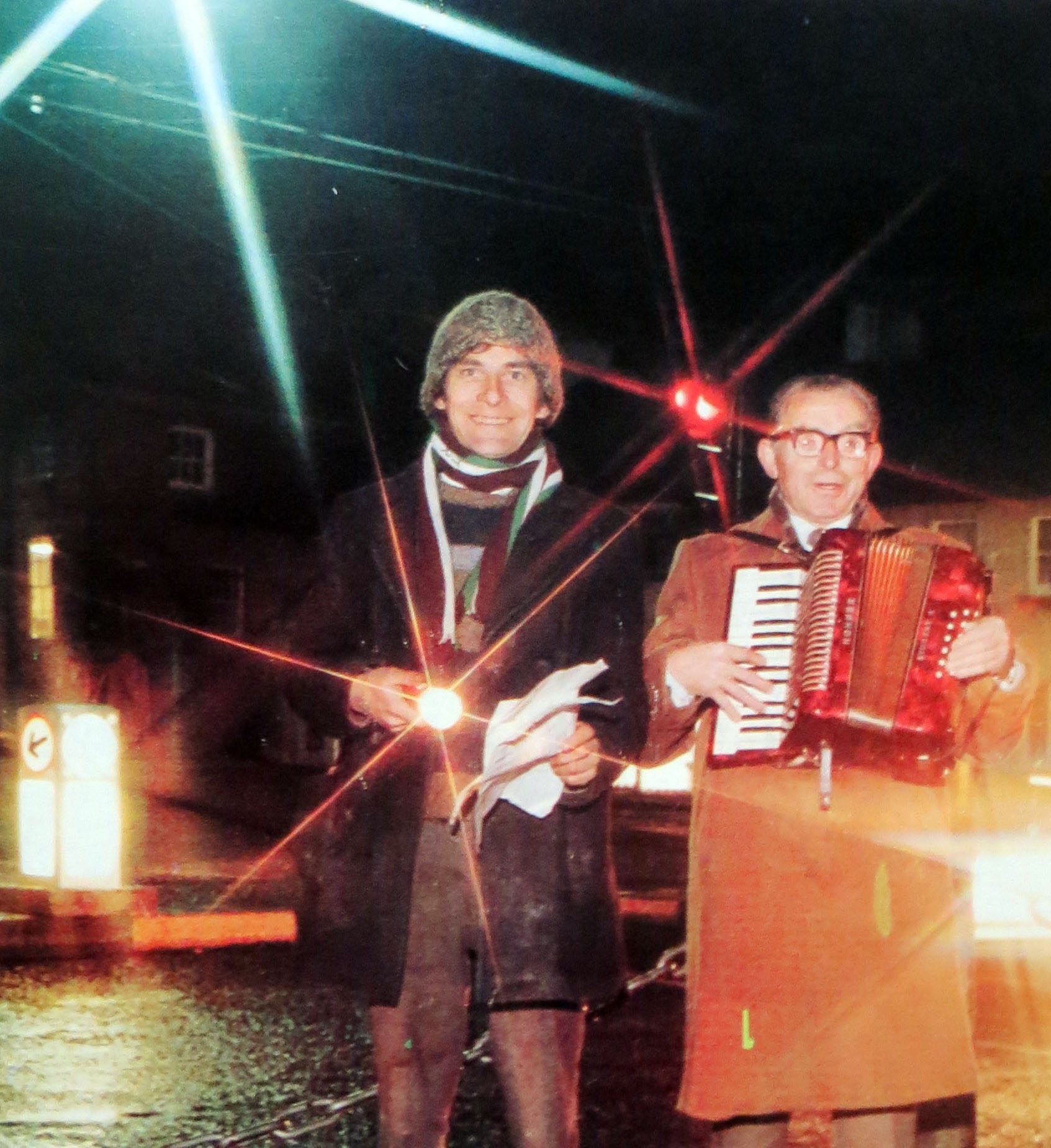 Stephen Guthrie and Dessie Dunne pictured during ‘The Waits’ in the 1980s. Photo: Tom Campbell.